A few weeks ago, there was a bit of snowfall that had me really excited.  I hadn’t seen snow in years.  That sad little bit of snowfall was nothing compared to the white madness going on outside my window right now.  My mom was saying they haven’t seen snow like this is December for years here in New York City, so maybe this is my welcome home snow? 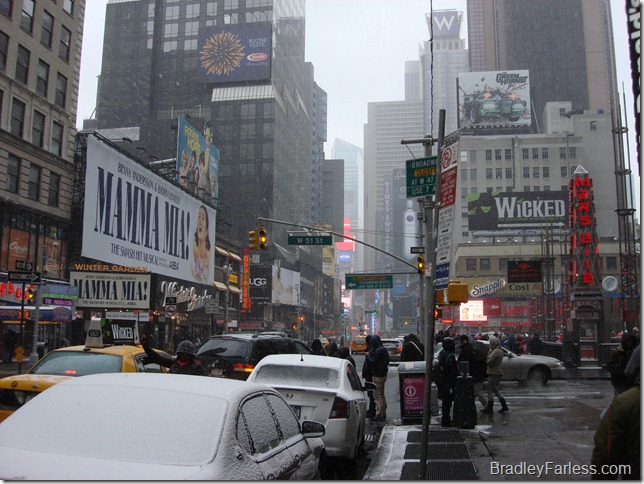 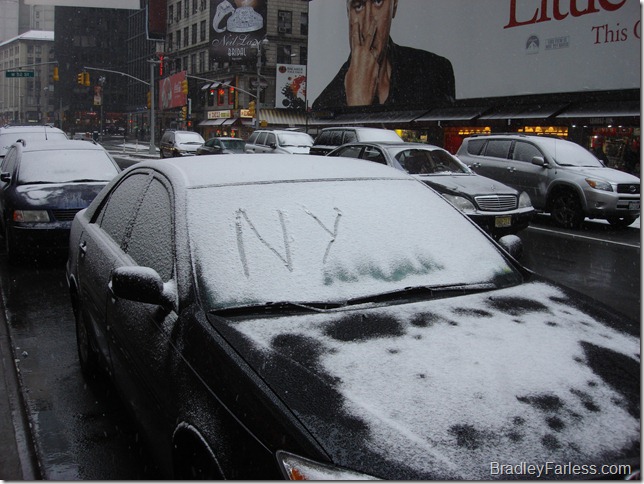 Yesterday, we started noticing the reports on the radio saying that there would be a lot of snow today.  We didn’t pay too much attention to it, because weather typically hits everywhere but in Lower Manhattan.  Still, I was hoping to see a little snow.  This morning when we got up, everything looked the same as it had for the past few days: grey, overcast and cold.  Right on schedule, though, the snow started coming down around noon.  I was surprised by how accurate the weather report was.  We came out of a church service at Times Square and the snow was coming down.  I got so excited, I Tweeted about it. 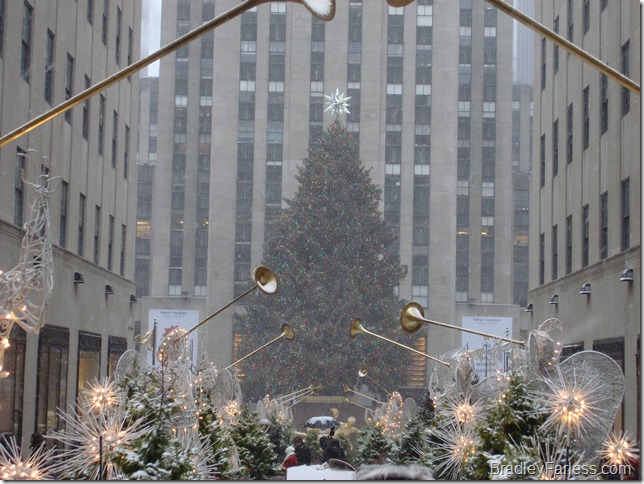 We took the time to walk over to Rockefeller Plaza.  I’d been pretty busy working over the past month so I didn’t get a chance to see the tree.  I thought I’d missed it for the year, but it was still up and lit.  It was really impressive looking. 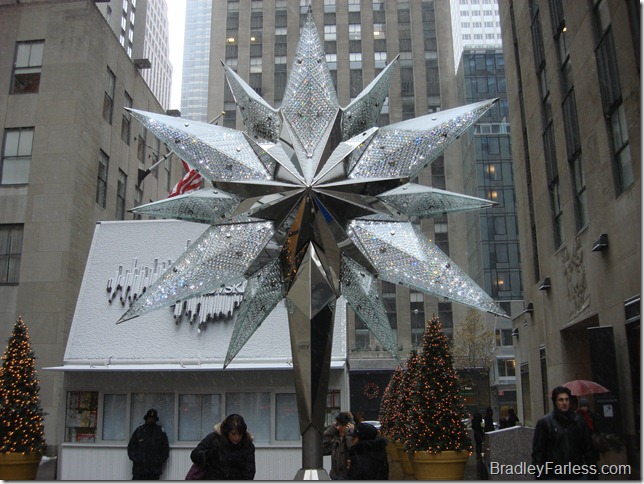 This is the Swarovski crystal star, a copy of which is on top of the big tree in the previous photo. 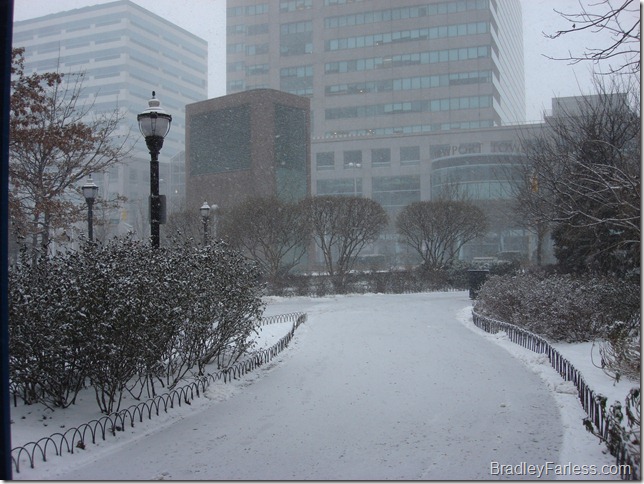 From there we took a trip out to Newport / Pavonia in New Jersey to visit the mall.  The snow actually didn’t seem as bad there as it did in the city, and that was more evident when we left New Jersey and went back to Manhattan.  We had a good stack of coupons we wanted to cash in on and needed a new tea pot.  We wound up picking up a good picture frame too.  We bought 80 bucks worth the goods, but had 53 dollars in savings, paying only 33 bucks.  Not bad huh? 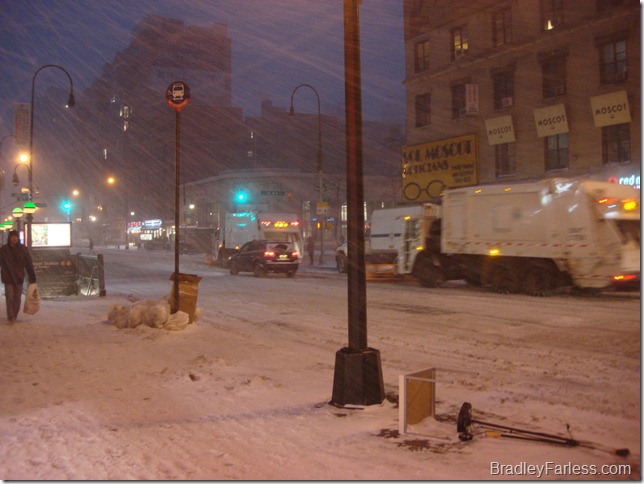 By the time we made it back to 14th Street in Manhattan, the weather was turning from amusing and fun to near miserable.  The wind was picking up, the snow was being driven into our faces, and it was beginning to pile up on the roads.  When we were heading out in the morning, the buses already had chains on the back wheels, leaving marks on the roads.  It’s a good thing they took that precaution.  Definitely. 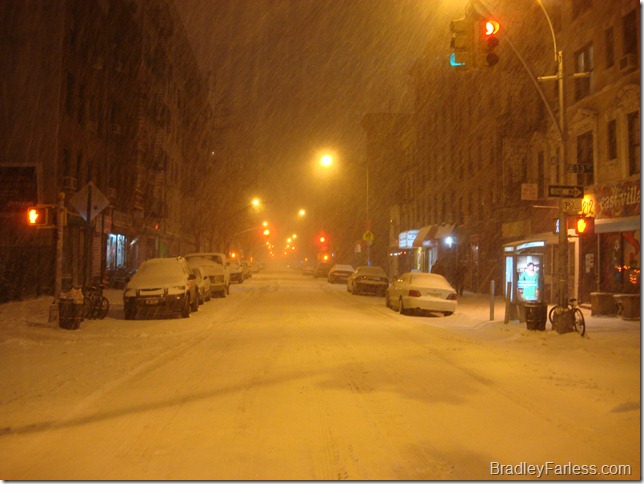 The road we live off of isn’t a main thoroughfare and it hadn’t been plowed at all, so everything looked sort of pristine.  The small businesses hadn’t bothered to shovel the walks and you could hardly tell where the road ended and the sidewalk began. 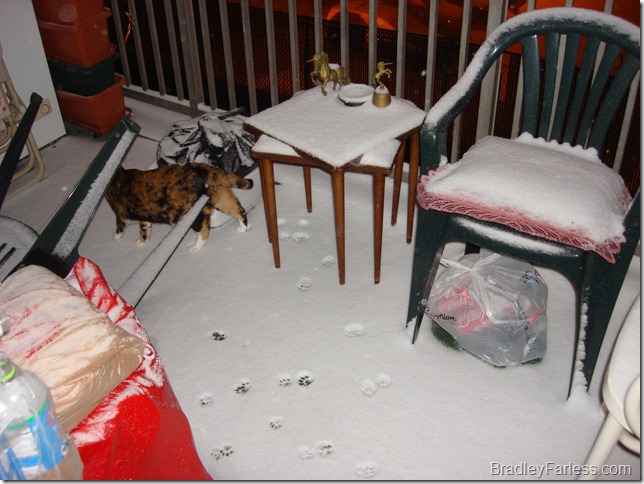 Even our balcony has a layer of snow on it, which our cat Marble decided was worth exploring. 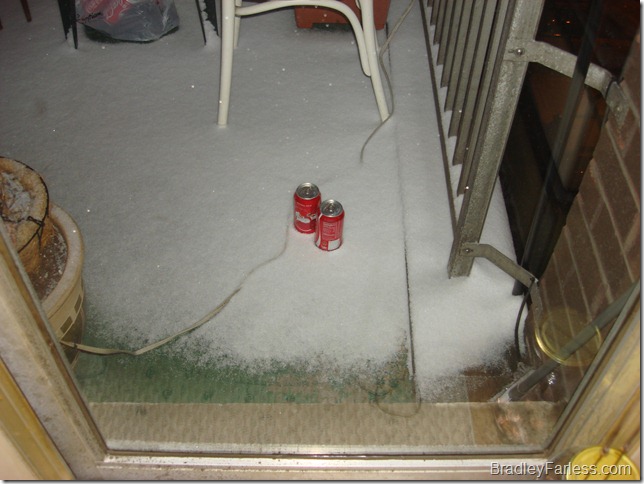 That snow and the cold is also good for quickly cooling down drinks!

The weather is turning worse.  The wind is picking up.  The tree outside our balcony is swaying back and forth nonstop and the snow is flying in every direction out there, getting thicker as it gets later.  All I can say is I’m glad I’m home, relatively warm, and hadn’t planned to do any serious traveling today.  Over a thousand flights were canceled out of New York City today.  I feel bad for the people who will have to camp out in the airport.  I feel worse for the homeless who will have to find shelter tonight.

I’ll have a cup of hot chocolate in a bit and do a little reading.  It seems like a good night for it.  Tomorrow, I think I’ll go visit Central Park.  I bet it’ll be a good day for pictures, before the snow all melts later in the week.  This snow is supposed to come down until around noon tomorrow.  Hopefully I don’t get lost in any snow drifts!

Ya, those paw prints on the snow are adorable. ^_^ She was only curious for about a minute before she decided the snow sucks and wanted to come back in.

damn that looks cold. im surprised the fat ass marble didnt seem bothered with the cold. i mean she is a singaporean cat and i was expecting her to be chilling inside the house away from all the blizzard, but no! she seems amused by it. i love the paw prints on the snow=)