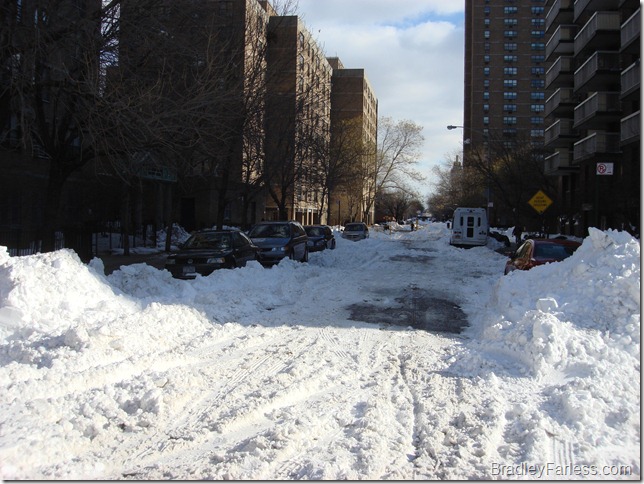 Ok, this is the third day of snowy fun and activities and things are starting to die down.  Temperatures went back up above freezing today and the snow in the roads was already turning to slush.  That’s worse than snow, really, because you’re more likely to get wet from splashes when it’s really cold out.  Plus, it could refreeze at night into ice. 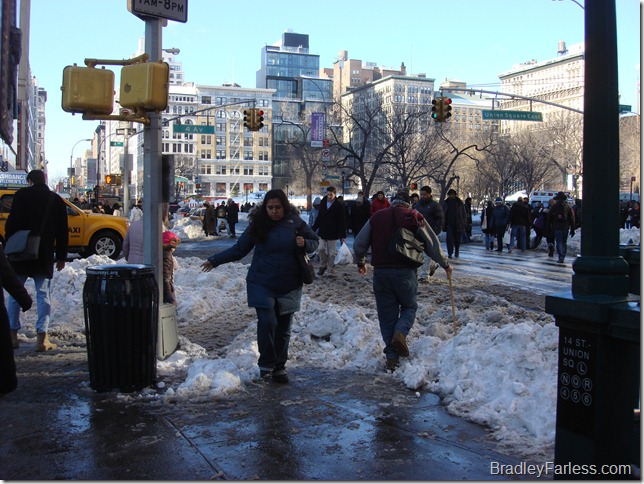 The slush also hides other things, things which could cause you to slip and/or hurt yourself.  You’d think more effort would be put into clearing pedestrian crossings.  This isn’t a back area.  This is at Union Square. 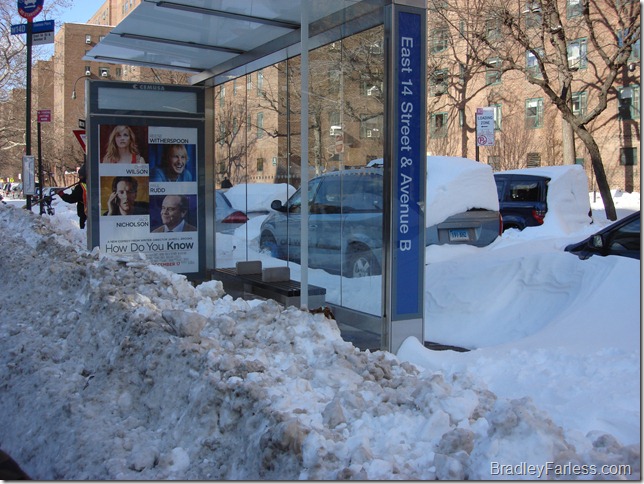 A lot of the bus stops are still blocked by the snow that was plowed off the road.  In a few places paths had been shoveled through the snow by workers, but most still looked like this.  We had to stand in the road while waiting for the bus.  Passing vehicles greeted me with sprays of slush that splattered all over my pants and coat.  Damn!

Earlier today I heard a radio address by the mayor saying that they’re doing the best they can given the circumstances, but I get the impression that response efforts are disorganized and the workers weren’t trained very well.  Besides the snow plow driver that got her snow plow stuck in the snow yesterday, there were still 58 ambulances that were stuck around noon today.  Why were ambulances on roads that hadn’t been plowed yet?  Why weren’t they responding by foot from the nearest clear street?

Anyway, the roads aren’t the only thing being affected by the blizzard.  I know this was a coincidence, but our boiler broke the first day of the blizzard and because roads were impassable, it’s still being worked on now.  This whole no heat, no hot water thing is really annoying.  To cap things off, Time Warner Cable is having an outage that started early last night.  The problem is ongoing.  I suppose snow is hampering repair efforts.

I am no longer interested in the joy and beauty of snow.

18 C is warm compared to this. Some nights it's getting down to as low as -7.7 C here, and that's not counting wind chill. I got so used to hot weather in Singapore and the Philippines that when it got down to 27 I used to think it was nice and cool. Ha ha ha! This is a real shocker for me, but it's still interesting, if bordering on the annoying. It was almost miserable, but we have heat and hot water again.

man thats a lot of snow, I can just imagine how cold it is. I swear I'm not going to complain about the 18 degrees celcius I experienced the other night any more.

The sky seems nice and clear here right now as well. It's supposed to warm back up to around 57 or so by New Year's Eve. I thought about doing a snow angel on that first day, but it was too cold and I wasn't wearing snow pants. =/ Like you, though, I'm sure there'll be more snow days here. It's not even January yet.

Let's hope for good weather though! And I'm glad you liked my updates!

I've been seeing the latest reports on the weather front in New York but your updates have been interesting to read! Man you guys got really dumped on! I agree though that after a few days it gets old….I didn't even make a snowman because of the effort involved, and probably because we'll have at least another 3 or 4 big snow days before winter is over. Right now it's looking bright and sunny with no snow forecast for the next week. Knock wood!