Yesterday’s blizzard started innocently enough.  When I left church it was already snowing.  It was really cool.  It was real snow, unlike the flurries from a few weeks ago.  The blizzard went all night long and then into the morning.  When I got up, we still didn’t have heat or hot water.  I don’t think that’s going to get fixed until tomorrow because the roads are pretty jammed up with snow.  I was thinking about going up to Central Park today for the photo opportunity.  I figured Central Park would look nice under a blanket of snow.  After listening to the news though, I decided against it.  The transit system isn’t working properly either and I didn’t feel like getting stranded or having to walk all the way back home from Central Park, if I could even get up there.  I thought about going to Union Square but that was still too far away given the conditions, so instead I just went to the grocery store.  There was more than enough to see on the way there. 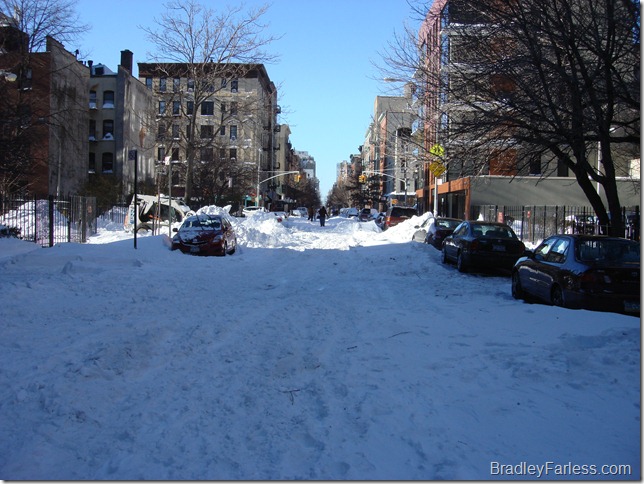 The side streets were still covered in snow.  Some of the sidewalks had been cleared of snow, but not everywhere.  In some places, the snow had been packed down into chunks of ice by people who had walked over it. 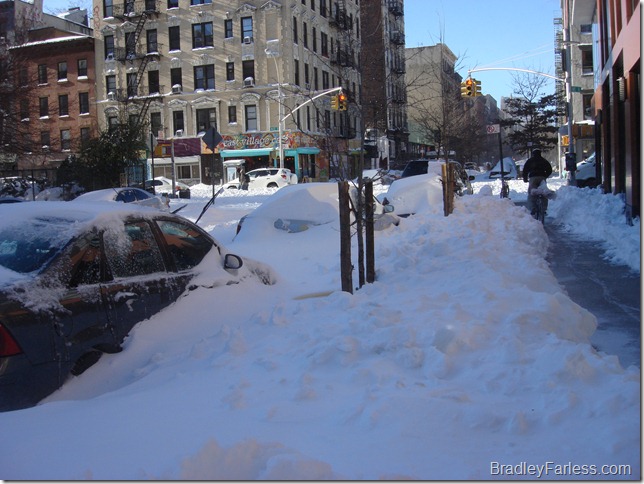 Yes, that is a delivery guy trying to ride his bike on an icy sidewalk.  I wonder if he managed to bust his ass? 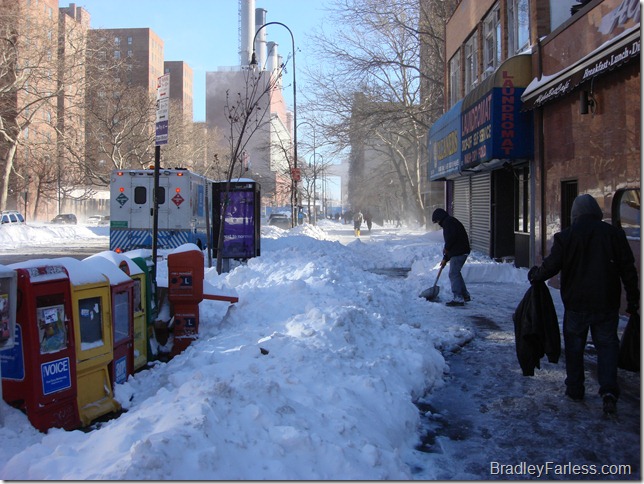 People were working to clear the sidewalks in front of their businesses on 14th street. 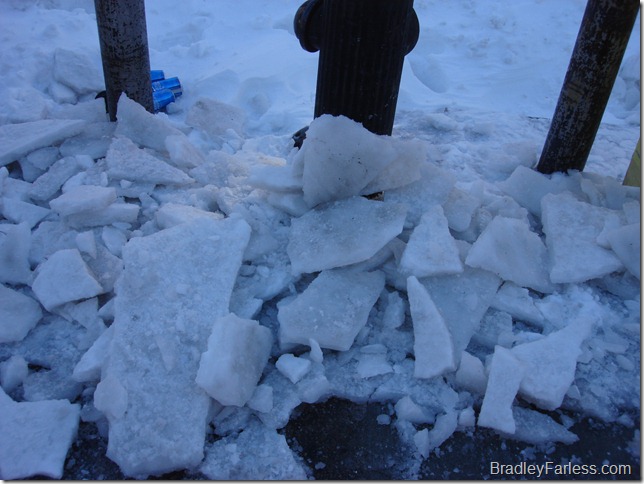 These chunks of ice were scraped from the sidewalk.  It had been packed down into chunks like that by people who had walked over it before it was shoveled clear. 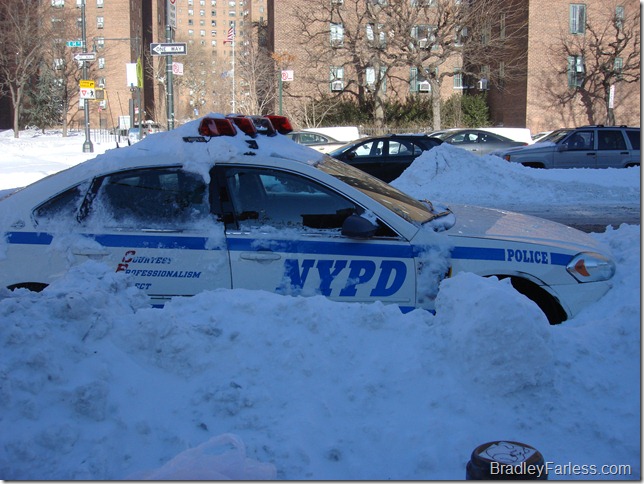 This NYPD cruiser was abandoned, stuck in the snow.  It wasn’t the only vehicle like that. 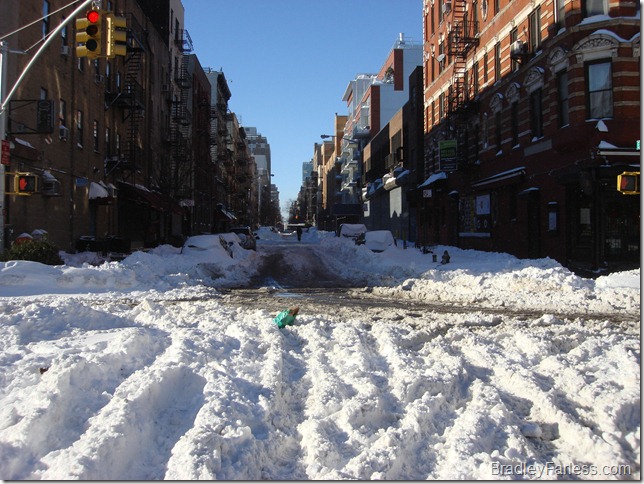 The city really looks empty today, with most people not bothering to leave their homes.  You could actually walk around in the streets because there wasn’t any traffic to speak of, and what traffic there was couldn’t move faster than a crawl, when they weren’t getting stuck. 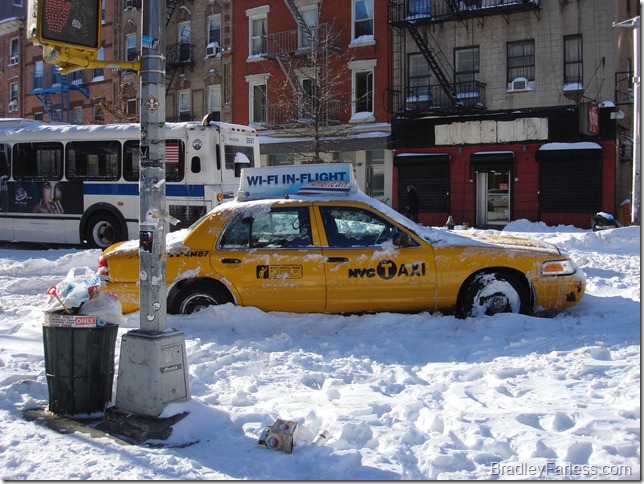 Like the police cruiser, this taxi was left abandoned in the street, parked at an odd angle because it was stuck.  The front of the car is pointed out into the street. 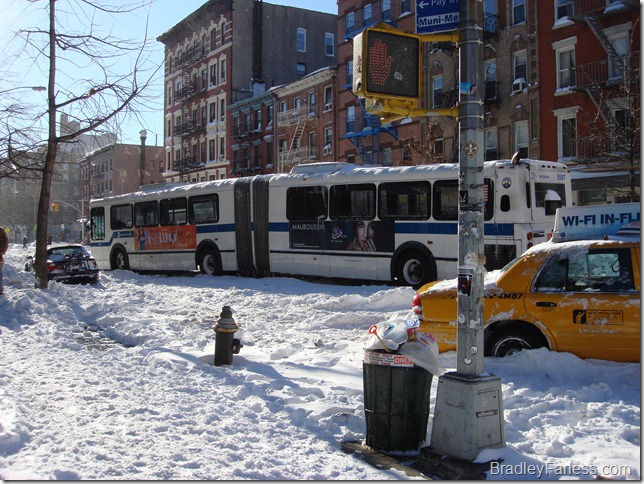 The bus behind it was also stuck in the snow. It looked like it had slid off the beaten path and gotten hung up. 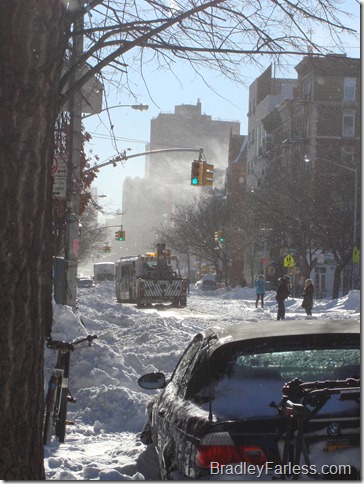 Just past the bus was another M14A bus that was also stuck in the snow along Avenue A.  It was being towed out by a tow truck.  A guy I talked to said that there were quite a few M14A buses stuck along the road.  He said he saw 3 more than these two.  I wonder why they even bothered to use Avenue A for buses when it obviously hadn’t been cleared well enough yet?

Speaking of clearing the roads, the buses weren’t the only ones having a hard time with the snow.  When I was just about back at our building, I saw a snow plow truck slide on the road and almost slam into a parked car.  I figured I’d record the truck for a while to see if it did anything else interesting, and it did!  The snow plow driver managed to get the snow plow stuck in the snow.  If that isn’t a fail, I don’t know what is.

If you look at the road behind it, it looks like the driver got ahead of herself, probably in a rush to get done and get home.  When I was walking away I turned back to look and people had come out of nearby buildings with shovels to help the driver get the truck unstuck.  I imagine she would have been really embarrassed to have to call a tow truck to pull her snow plow out of the snow.

Anyway, I’m back home now, getting ready to eat hot chicken soup and read a good book.  Tomorrow, the temperatures are supposed to come back up above freezing, so this snow should all start to melt.  By the weekend, it’s supposed to be up to 57 degrees again.  Really weird weather!

I had to try really hard to not bust my ass on the pavement earlier. My Doc Martens don't have the best tread on the bottom. I didn't expect to need heavy snow boots yet. I suppose most people can 'handle' it, but the streets aren't getting cleared very quickly or effectively. Our transit systems are screwed too. Some people were stranded in buses and trains last night that got stuck.

They actually might do better here with CATs that have treads instead of wheels. Those would be harder to get stuck. What they're using right now isn't doing so well. Just to give you an idea, over 120 ambulances were stuck in the snow earlier and the emergency ambulance response time was, and is, 3 hours. I was told that this is really unusual for NYC, especially this early in the winter.

woah! we had some pretty bad snow here in the UK recently, difference is you guys seem to be able to handle it. I've been sliding up and down the ice on the pavements for the last 2 weeks!

wow! you guys have it worse than we do and our city is known for its ridiculous coldness/blizzard. The best part is how you guys utilize your dump drucks as snow plows, its pretty creative imo. Over here we have a separate brigade of CAT Snow plows that literaly work in a line scooping off left overs from the first snow plow.. this year seems to be very mild for us and hopefuly it stay that way, hooray climate change.