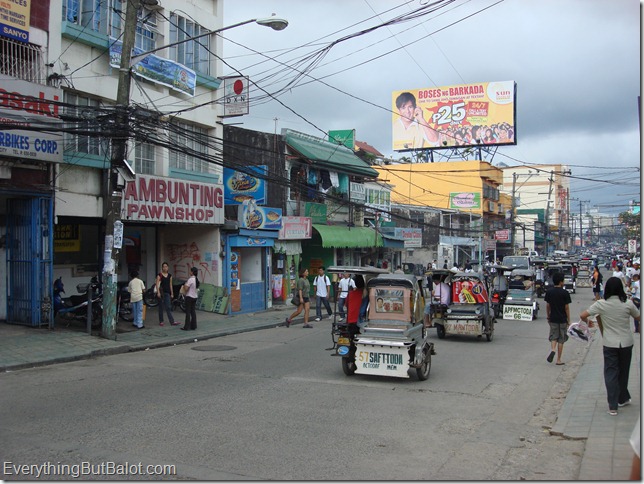 This is a question my wife has asked me on more than one occasion.  It seems to boggle her mind that I would really look forward to moving there.  The Philippines is a ‘poor’ country and many Filipinos strive to find ways to leave and find what they consider a better life abroad.  There’s something of a joke that the primary export of the Philippines is human beings, as a labor force.  With so many of her countrymen trying to get out of the Philippines she finds it curious and a bit odd that I’m so excited about moving there.

Just to clarify, I’m not going there with some wealthy expat package lined up.  I’m moving there for other reasons, which I’ll get into later in this post.  But, for all intents and purposes, when I move to the Philippines I’ll be living pretty much as the average Filipino does.  That will have both its ups and downs, but I look at this as a great opportunity rather than a disadvantage.  The easy answer is that I’m moving to Manila to go to college, but there’s more to it than that.

I spent the first part of my life in the US Army.  I was actually enlisted in the US Army Reserves before I even finished high school and shortly after I applied for and was accepted to active duty.  During that time I had a few odd jobs on the side, but my service in the Army was the only ‘real’ job I’ve held.  I wouldn’t call service in the Army a waste of time, but it can seriously set you back if you don’t intend to see it all the way through, or if you later decide that you’ve had enough and don’t want to do 20 years for a retirement.  I didn’t completely gimp myself.  During the last year and a half I was in, I realized I wasn’t going to make a career of it after all and managed to squeeze in almost 2 years worth the college credit hours through CLEP tests, sit down courses and online courses through Park University and the University of Maryland UC.  Those college credits paid off by giving me enough points to get promoted to Sergeant before getting out, and by giving me a leg up on getting a degree.  I earned a scholarship while in the Army that will pay 100% of my tuition.  There’s a time limit on it, and it’s hard to go to school full time and still make it financially, but I’m in a position to make it happen now and I want to take advantage of this opportunity, because it may never come again.

In the US, it’s possible to get a decent job based on military service alone, but outside of the US that’s nearly impossible.  I’ve found that out the hard way.  Having a degree on top of my military service would make me look real good though, both to peers and to potential employers.  It’s a nice thing to be able to say you have a tertiary education and a piece of paper to prove it.  I want that.  I am by no means an idiot, but just saying you’re smart or good at something isn’t going to win you a job interview or a high paying executive position.  People want proof.  They want evidence that you’ll be a good, solid investment.  Even if your degree isn’t necessarily applicable, it will show that you’re at least smart enough to learn.

Eventually I’ll make my way back to the US, and I think that having lived abroad for a number of years and having a degree from a foreign, but US accredited university, will give me an advantage.  The work climate in the US right now seems to be focused on finding people that can interact in multiracial groups of people from diverse backgrounds, and having lived abroad and having gone to school abroad would be a clear indicator that I at least have experience with getting along with people who are different than I am.  That’s also something you learn in the Army, though to a lesser degree.

The time I spend in the Philippines will also be an opportunity for me to enrich myself on a personal level by gaining a greater understanding of the world around me.  The Philippines is a place rich with history and culture in a way the US can’t quite match, now or in hundreds of more years.  The US is a melting pot of cultures and while that has its advantages, it causes the US to lack any sort of distinctiveness, politics and war aside.  So, it’s a very thrilling prospect for me to live in a country that has so much history behind it, to learn about the people living there and to experience it all first hand.

It’s also an opportunity to connect with my wife’s family in a way that a short visit just can’t accommodate.  My wife is from the Philippines and we’ve visited a few times but the visits are brief and while we try to mix in sight-seeing with visiting time with her folks, the whole thing always feels rushed.  Living there will give me more time to hang out with them and get to know them.  It’ll also give my wife an opportunity to reconnect with her family before we move on to other things and other places.  I’m also hoping she’ll be able to finish her second degree, a master’s degree, or medical school while we’re there.

So, moving to Manila and going to college will provide me with a lot of advantages in terms of future employment when I return to the US, as well as being personally enriching for both my wife and I.  I think both reasons have equal value because living life isn’t just about the job you hold or your income; it’s about family, experiencing the world, learning, progressing, understanding and eventually contributing to society.  This move will be a win-win situation all around.

The focus of this blog will be whether or not we achieve these goals, how we make it happen or how we fail, and the adventures we encounter along the way.