Today was voting day for the 2010 elections.  We got here just in time to witness the madness.  In the US, campaigning can get pretty wild and out of hand, especially when the target audience is a bunch of radicals or ultra-rightwing conservatives, but in the Philippines they step it up a notch. 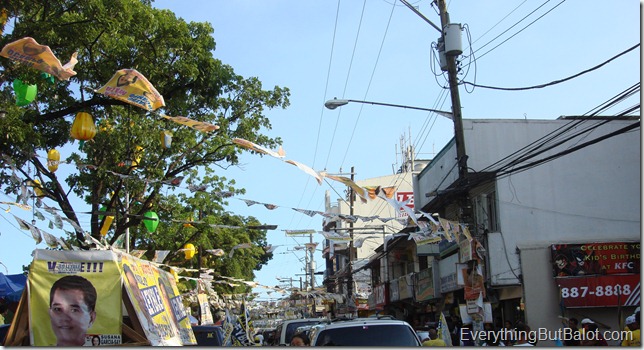 First off, the campaigning is in-your-face.  You really can’t miss the fact that there are elections going on because almost every available inch of wall, post, and overhang is used to display posters of the candidates.  Some campaigning parties will even run strings across roadways (as seen in the image above) and have hundreds of the same poster hung up.  It gives the whole thing a sort of festive feel.  I also saw a lot of private vehicles and transportation vehicles (like taxis and tricycles) covered in campaign posters (pictured below).  Every last one has a profile photo of the candidate, presumably at their best. 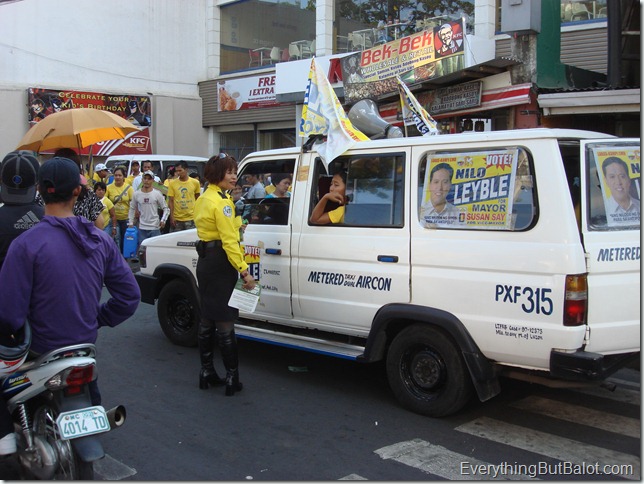 The other interesting thing about campaigning in the Philippines is that trucks will drive around, or position themselves, with music blaring to draw attention to a particular candidate.  They’ll use the music (minus the vocals) of a popular song and overlay it with a slogan or a song about the candidate.  For example, we heard one playing the music from Lady GaGa’s Poker Face.

Today was the actual day for voting.  We hadn’t intended to leave the house, for safety reasons, but wound up going to a restaurant called Max’s with my father-in-law, brother-in-law and brother-in-law’s wife.  It was a delicious meal!  The only sign we saw of the voting process was a long line of tricycles and a crowd of people gathered at one point along the road, outside an elementary school where the voting was being done.  Other than that it was traffic and business as usual.  I suppose the real drama might come when the results are announced, if they haven’t been already.

I believe this year was the first year that the Philippines used an electronic voting system, rather than manually counted ballots.  The idea is that it’s supposed to inspire confidence in the citizens and allay fears of corruption and cheating.  It may work in some areas.  Some parts of the Philippines are so poor that a shiny computer screen is almost like magic, but most educated voters will probably realize that computer results can easily be manipulated, the same way that manual votes can easily be forged or disposed of.

If you’re not familiar with the government in the Philippines, it’s so consumed with corruption that it’s surprising it hasn’t fallen apart yet.  The current president, Gloria Macapagal Arroyo, is recognized as one of the most corrupt leaders to ever hold office anywhere.

I doubt that the election will be any more fair this year than it’s ever been, but hopefully whoever gains office will be more fair than the outgoing president.