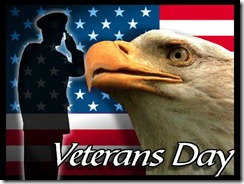 Veterans Day is a day for honoring veterans of the armed forces in the US.  This morning, there was a parade to honor the federal holiday.  Unfortunately, I didn’t know about it or I’d have been there taking photos.  I guess I’ll have to make sure to go there next year to check it out.

For those of you that don’t know, I’m a veteran myself.  I served in the US Army for 8 years, and I’ll take this opportunity to brag about some of my achievements.  I served in Operation Iraqi Freedom in 2003.  I was part of the initial force that moved into Iraq, right after the Iraqi Republican Guard was bombed on the border.  I was deployed again in 2007 for an Air Defense Artillery operation.  While I was in, I racked up a stack of certificates of appreciation and certificates of achievement, as well as more notable awards like 3 Army Achievement Medals and a Good Conduct Medal.  I also had the opportunity to participate in a German weapons qualification range and scored a Silver.  I missed Gold by 1 round from a 9mm.  There’s plenty more that I did, including community service projects like assisting kindergarten teachers with classes in El Paso, but you get the point.  I did service to the country, and today was a day to celebrate that service, and get some free food!

Quite a few food chains had specials today, offering free or discounted meals to veterans, and I took the opportunity to meet up with a guy I served with in Kuwait at Applebee’s on 50th Street, near Times Square.  It was the first time we’d seen each other since we left Kuwait in early 2008.  We were greeted warmly, treated well, and the food was good.  I had to pay for my drink, but with the dish being free, I couldn’t complain.  It was interesting seeing veterans and active duty members of various branches of the service in the Applebee’s.  Some showed up in uniform, some didn’t, but you could almost always tell who was military or a veteran at a glance.  I guess something of the culture stays with you.

After my friend and I left Applebee’s we decided to avail ourselves of another offer we’d seen posted around the Internet: the free six inch sub from Subway.  So, I pulled out my phone, looked up Subway on Google Maps, and away we went.  We walked into the Subway at 136 W 44th Street and asked about the offer.  We were told that Subway didn’t have any offer like that, and they couldn’t do anything for us.  So, we walked out and we decided we’d try a different location.  First, I looked up Subway again on Google Maps and then decided to call ahead, before we wasted a bunch of time walking all over the city.  I decided to call the 126 West 41st Street location, since it was the next closest, and the woman that answered said she’d never heard of what I was talking about either.  However, she said she would make an exception and honor the deal we told her was posted all over the Internet, but we’d have to buy a drink along with the free sandwiches.  It was better than nothing, so we went ahead and took her up on it.  While we were there, other veterans came through the door asking about the deal.  According to them, they’d tried to avail of the offer earlier at a Subway near Port Authority but had been turned down there as well.

Later, when I got home, I looked up the offer online and saw that it was marked specifically as being at only certain locations, but based on my experience and hearing from those other vets, I get the feeling that none of the Subways in New York City were honoring the Veterans Day deal, except the one where I talked the girl into partially fulfilling it.  Maybe we’d all just had bad luck in which locations we’d walked into though.

I think it’s a shame that any Subway wouldn’t fully honor the agreement as advertised.  It is Veterans Day after all!  One day a year to say thank you to the people who make sure that places like Subway can remain operating in a free country.  One day a year to give out a sandwich to say thanks.  Oh well.  I’ll just remember that for next year.

Overall, it was a great evening, catching up with an old buddy, getting a free meal, and walking around Times Square.  I’m looking forward to doing the same again next year.  Maybe more people I used to serve with will be in the area and we can arrange to meet up!

IM proud of you honey! Happy Veteran's day though a little late!

i did too rinaz. hehe

Don't feel bad. I thought that too for a long time, even after I'd been in the military for a few years. In the last few years, there has been a lot of lobbying for increased benefits and assistance for veterans, probably because people feel bad for us having been sent to combat so regularly over the last decade. That's raised awareness through publicity. I still feel weird sometimes referring to myself as a veteran. It's nice that we're seeing an increasing amount of benefits coming our way though, and not just from once a year handouts from private companies.… Read more »

Call me ignorant, but for a long time I've always assumed that “veterans” are old retired people that has served the war.

I know what you mean. My dad used to walk around wearing his BDU bottoms quite a bit too, until they completely wore out. Then he still kept them, for hunting. Crap. I just realized I forgot to call him today. I wasn't thinking beyond myself. =/

That's true about Subway. I went to Subway about once a month on Camp Arifjan in Kuwait. They're nearly everywhere the Army is. I made a comment about that to my buddy and he laughed, because he'd been to that Subway too.

Thanks for the well wishes!

Good read. I just got off the phone a few hours ago with my Dad who was telling me of his experience in Applebee's (upstate NY) with him, a fellow Marine gym buddy and the many others that were there enjoying being honored.His story was similar to yours about seeing fellow veterans and a sense of comradery. It's only a few times out of the year that my Dad may seem to fit in (a civilian always in BDU's). That is odd that Subway would not have got the word out to all of their franchises about the promotion.Especially considering… Read more »