As in the West, the use of garlic plays a prominent role in Filipino superstitions.  Filipinos have always been very superstitious and many continue to believe in their validity now.  I recently saw a neighboring family removing branches from the trees around their house because they thought a manananggal was hiding there at night, preying on the family.

A few days ago I saw a braid of garlic in the store and my wife started telling me about how some Filipinos believe it’s useful against manananggal, so I decided to look up as much information as I could about the use of garlic in Filipino superstitions.  It turns out that it’s mostly used as a preventative measure, as a ward against the manananggal, aswang and tiyanak. 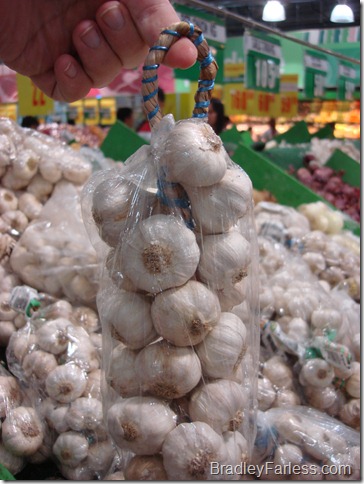 The manananggal is the Filipino version of a vampire and an aswang is much the same, except that unlike the manananggal, it can’t fly.  The terms aswang and manananggal are often used interchangeably, though some distinctive characteristics of an aswang are that it can also use witchcraft and may be an eater of the dead, replacing cadavers with banana tree trunks.

To prevent an aswang or manananggal from entering your house, it’s recommended that you place braided cloves of garlic and salt at all entry points, such as the windows and doorsteps.  Oddly enough, it’s believed that the odor of burning rubber will serve a similar purpose, but garlic is much easier to come by and more practical than burning tires every night.

A person that believes they may become a victim of these creatures should carry crushed garlic or a mixture of crushed garlic and salt wherever they go.  The smell will prevent the aswang and manananggal from being able to track them.  This is probably effective if you want to prevent anyone from standing too close to you, especially on extremely hot days.

In the event that you’ve seen a manananggal and you want to ‘kill’ it, you have to roam about in the village or surrounding woods, searching for its lower half.  The manananggal’s upper body separates from the lower body when it grows wings to fly about, searching for prey.  When you find the lower half of the body, you should set a trap, usually made of heavy ropes and then sprinkle the lower half of the manananggal with salt, ash and garlic.  This will cause the creature a great deal of pain and the upper portion will return to see what’s going on.  When it does, it can either be killed or have the curse removed by shoving a pint of salt down it’s throat, which will make it vomit up the evil, egg-shaped stone that carries the manananggal’s spirit, freeing the human from its influence.  The stone should be vomited directly into a fire.  If anyone else touches it, they risk being possessed by the manananggal.

The tiyanak, a creature that can take on the form of a newborn baby to attract victims, can also be repelled by garlic along with a rosary.  Another method of driving it off is to turn your shirt inside out, which supposedly entertains it enough to let you go.  Tiyanaks are believed to be born from the corpses of babies whose mothers died while they were still in the womb.  A modern derivative is that they are the souls of aborted fetuses returned to terrorize and take vengeance on those that denied them life.