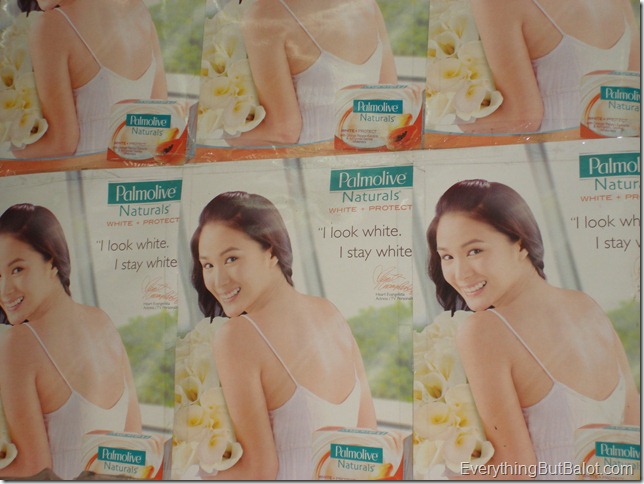 I took the above photo in a department store in Antipolo, but these kinds of ads can be found everywhere, from in-store ads to billboards to TV and radio commercials.  This slogan is the defining characteristic of the Filipino ideal of beauty.  To some degree, it applies to men as well.

Filipinos have a mixed heritage that can be traced back to Malay, Korean, Chinese, and Spaniard origins, but the original inhabitants of the Philippines, called ‘Atas’ I believe, were dark skinned and had tight, curly hair and flat noses.  The Spaniards referred to these people as Negritos because they resembled small native Africans.

During the course of hundreds of years of colonization the Filipinos began to associate power and dominance with people of lighter skin tones, with long straight hair and sharp, ridged noses.  The word ‘Atas’ became a derogatory slur hurled by children in the schoolyard to describe someone that was ugly, dark, or to indicate a person that behaved in a primitive fashion.

Today, the average Filipino TV star, movie celebrity, music artist, and even sometimes politicians are mestizo, meaning they’re of mixed parentage, with one parent being Filipino and one parent being a foreigner, usually a Caucasian.  This is also sometimes referred to informally as being tisoy or tisay, depending on whether a person is male or female, respectively.  In the old days of Spanish colonial rule, these mestizos were placed on a higher social status, between pure Spaniards and pure Filipinos.  That idea of being in a higher social caste based on mixed parentage has survived in the form mentioned above until today.  Some mestizos take this mentality to an extreme and strut around with airs of superiority that generally piss off everyone around them.

For everyone else, there’s whitening products galore available in every ‘sari-sari’ store, grocery store, convenience store and department store in the country.  Whitening soaps, whitening creams, whitening bath salts, whitening deodorant, and even whitening cleanser for the genital areas.  Also, the standard hair treatment for Filipinas (female Filipinos) is to have their hair straightened and rebonded, which leaves the hair hanging straight down and flat, as far from short and curly as possible.  Also, nose jobs are popular among the more well-to-do Filipinas to give them a more Caucasian looking appearance.

The end result of this is narrow ideal of beauty is that most Filipinas wind up looking the same.  Oddly enough, this is more true of Filipinas in other countries, like Singapore, than it is in the Philippines themselves.  I’ve seen quite a few Filipinas in the Philippines who are working hard to achieve this standard look, but in Singapore I used to joke that the Filipinas there are part of a drone army, because they all look the same and you can pick them out of a crowd from behind, without even having to see their faces.

Men in the Philippines seem to have more leeway when it comes to standards of fashion with hair and skin tone (as long as they’re not too dark), but nose jobs are still popular if affordable.  Thankfully there are soap products available for men that don’t whiten the skin.  I’m white enough already.  In fact, I’m trying to get a tan.  The sun in the Philippines is like the sun at the beach and I still equate a tan with being healthy.

This is a matter of personal taste, but I always found that diversity breeds uniqueness, and uniqueness is what’s truly beautiful.  If everyone looks the same, with the same haircut, the same artificially whitened skin, the same nose job, then there’s nothing special about that ‘look’ anymore and it becomes bland and unappealing.

Beauty Standards Around The World - ModMia

Beauty Standards Around The World – Your Everyday Life

I am Filipina, but I like that I am different. I have curly hair and darker skin 🙂

Most Filipinos are also scared to get Nosejobs cause what if the Nosejob will become a FAIL.

Dude or Dudette there are not many Filipinas who do Nose jobs the once who do Nosejobs are the once called Homosexual or also bayot in their country. Im half Filipino and German but I am mistaken as Mexican, Yeah I know that Filipinos want to look white but thats so called impossible to have white skin like Americans or Chinese, we adore our Cocoa skin. The Filipinos who are white are the mix races even when they say they are 100% Filipino they got it from their ancestors.

Wow! this blog is all about whitening product? Emmm…Yes! We admit it we are dark but not that dark but we are proud by being ourselves by our skin tone or even attitude…YAS! This country under Espanya years ago other of our name is like spanish names but Pilipino’s are not Spanish or Spaniards we are our own people! Pilipinos are Pilipinos! But this blog is great! I like reading positive reaction of our country *If someone didn’t understand my english im so sorry….*

It’s sad that many Filipinos are obsess of having white skin. I am a Filipino but I am being mistaken as Chinese or Korean because of my physical features. And they always notice my white skin. Like how they love to have skin color as I have.

This is a matter of personal taste, but I always found that diversity breeds uniqueness, and uniqueness is what’s truly beautiful. If everyone looks the same, with the same haircut, the same artificially whitened skin, the same nose job, then there’s nothing special about that ‘look’ anymore and it becomes bland and unappealing.

Beauty Standards Around The World | Who is Video

Beauty Standards Around The World | Who is Movies

What is ideal beauty? This lady had her face photoshopped in over 25 countries to find out

[…] researching on the “ideal beauty” in The Philippines, I came across this blog post with very interesting […]

Beauty Standards Around The World | Woowix

Hi I’m a Filipina… People here in our country appreciates high nose bridge but we don’t actually work hard just to undergo nose job..If we found somebody having surgery, that is even disliked by most ..So please research more.

If that’s the case then why is every actor and actress on TV tisoy or tisay with a nose job and fair skin? Why is almost every personal care product “whitening”? Don’t assume that your personal opinion, which certainly other people also agree with, is the majority opinion when it isn’t reflected by the popular culture.

Late reply but better late than never, I suppose. Generally, when Filipino celebrities get plastic surgery of any kind and it’s been exposed or if it’s not at all subtle surgery and is super evident, we tend to frown down upon them since we prefer natural beauties. Ritz wasn’t just expressing her own opinion but she is also bringing up what the general Filipino audience feels about beauty and surgery. Skin whitening isn’t deemed to be so bad but the concept of actually changing your bone structure via plastic surgery is still somewhat of a taboo in the Philippines. Even… Read more »

It’s annoying how we tend to degrade people who have lower nose bridges, but also do when they go under the knife just to feel good about themselves. (i know this was 2 years ago but oh well)

Ya. I meant 'aetas'. Someone had actually pointed that out to me in the comments previously, but that was when this post was on another domain I shut down and I haven't been able to figure out how to import the comments yet. =( You're partially right about the Koreans. I shouldn't have worded it that way. Over the last 100 years, more and more Koreans are moving to the Philippines and they're slowly mixing into the local population. So, there are quite a few Filipinos with Korean heritage now, but the majority of the population has other ancestry. I'm… Read more »

Correction: Filipinos don't have Korean origins and there are many original inhabitants of the Philippines. The Ifugaos, the Badjao, you probably meant 'Aetas' though, since 'Atis' is a fruit in the Philippines. 🙂

haha ken is right. atis is a fruit. its aetas or itas.

Itas 🙂 Atis is a fruit – quite a good fruit though. The whitening soap and wanting to be white and having Caucasian features is a pervasive attitude among Asians in general. But in the olden days for Chinese, having white skin shows that you're from a rich family and you don't have to work under the sun (not because you look Caucasian). Nonetheless, the standard of beauty in most part of the world is the caucasian beauty – that is the remnant of the days of european colonization and the pervasiveness of Hollywood movies. I always wondered if we… Read more »