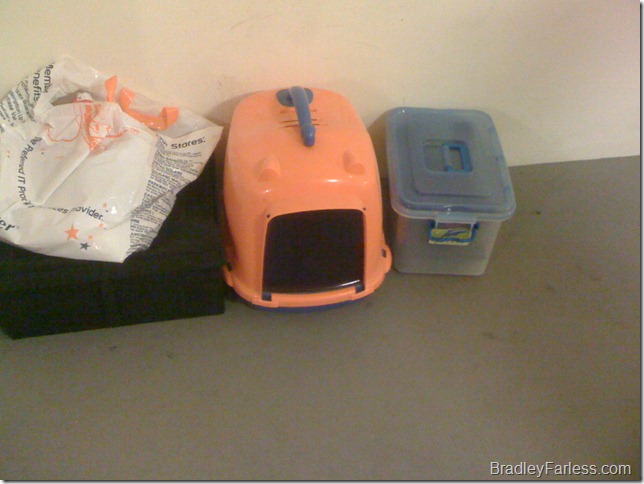 We had that litterbox for two years. I’m sad to see it go because it’s really nice looking and you can’t find litterboxes like that in the Philippines.  Or at least, we couldn’t find one.

Our last day in Singapore was a pretty exciting one.  We went downtown, saw menstrual blood splattered all over a train seat, met the guy that runs the @Trattoriasg Twitter account (who is a part-owner of Trattoria in Somerset), did a little shopping, transferred money from our Singapore accounts to the Philippines, celebrated a birthday, and then went home late to finish clearing out our place and packing our bags for the flight.  We finally got out the door around 2 AM. 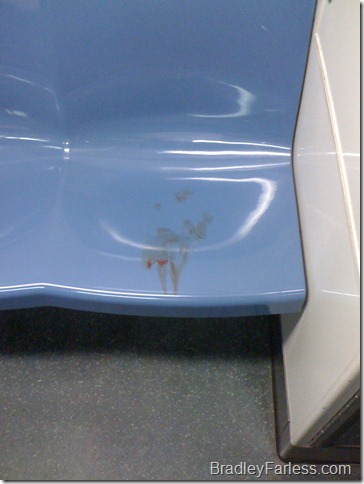 This seat was really reserved, by menstrual blood.

Changi was a lot quieter than I expected.  The place is usually bustling with people, but I guess even an international airport can empty out in the early morning.  Did you know that between 2:30 AM and 5 AM the Skytrain doesn’t even run?  You have to take a free shuttle instead, which we wound up using because we went to another terminal to find a place to eat at.

Our check-in was incident free, but the flight was probably the most uncomfortable I’ve had.  It was through no fault of the airline though.  I expected to have a quiet, stress free flight this time, because we didn’t have our cats with us.  Unfortunately, three Filipina prostitutes were in the row behind us.

Let me ask you guys something?  Could you sit in a plane and speak loudly about how many guys you’d fucked over the past two weeks?  How about for 3 and a half hours straight?

Well, these hookers could.  They kept ordering alcohol too which just made them even more obnoxious.  By the time we landed in Manila, everyone for three rows in every direction around them was pissed off and giving them disgusted looks.

They didn’t care.  They were ugly though, so maybe that was the only way they could get attention?

After getting out of the airport we went directly to the taxi.  As usual, the fare wasn’t right.  Even though it was a metered taxi, he suddenly wasn’t willing to use his meter for the area I wanted to go to.  He said it was too far away.  He wanted 1,180 PHP to go to Antipolo.  That’s 380 PHP more than what we paid when we used the same taxi service on the 6th of last month.  So, instead we told the guy to keep his meter on and just drop us off at a place called Junction.  The meter was at 470 PHP.  We jumped into an FX (another form of privately owned public transportation like a van) and paid 40 PHP to get to Antipolo and then paid 70 PHP to ride a tricycle to my wife’s neighborhood.  So, 580 instead of 1,180.  If we’d taken the taxi to the nearest mall and then taken an FX from there, the total bill would have likely only been around 260 PHP.

Anyhow, flight and travel drama aside, the real battle for the house begins now.  Our earlier visit was like a scouting mission with minor skirmishes.  Now I have an idea of what needs to be done and, after getting the furniture tomorrow that we didn’t get today, I can pick up where I left off and get this place into tip-top shape.  Well, as good as it’s going to get anyway.  I’m not going to sink our entire savings into fixing up this place.  It’s just not practical.

Yesterday we rested.  I was up for 25 hours straight and my wife only got about an hour’s worth of restless sleep on the plane.  Today we snored until 1 PM, had lunch and then went to the town to drop off laundry we’d left here for washing and then we hit the grocery store.  I don’t know where the time went but by the time we got home it was 10:30 PM.  Then, we spent about an hour and a half cleaning the kitchen and giving the fridge a thorough scrubbing / defrosting before putting anything in it.

I’m tempted to just hire a dozen domestic helpers and handymen for a few days, but I haven’t given up yet.