Yesterday I went to the Japan Society on 47th Street here in Manhattan.  They were having a Concert for Japan, with 100% of the proceeds going to the Japan Relief Fund.  I knew I wasn’t going to get there early enough to secure tickets for any of the shows, but the admission fee for the building was only 5 bucks, and it included full access, including the Bye Bye Kitty! art exhibit, which was my main reason for going there anyway.

When I showed up, they had speakers set up outside so you could hear the concert from the street.  It sounded pretty good, so I sat down on one of the benches across the street for a while and just enjoyed the tunes. 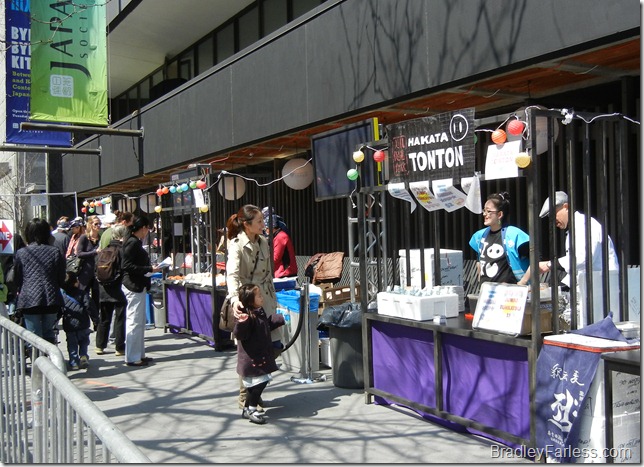 Then I noticed there were food stalls, so I had myself some takoyaki.

Once I got inside I went to the area called the “J-Lounge”, and got a bottle of Pocari Sweat.  It’s better than it sounds!  It’s a sports drink, which is why the word “sweat” is included in the name, but the girl gave me a weird look when I asked for it.  I had to explain what it is to her, then I shared the story of my reaction when I first saw it in Singapore.  She agreed with me that if they really want to market the drink in English speaking markets, they should change the name.  The J-Lounge also had a big screen TV in it that was showing the concert on the lower level.

After I finished the drink I went up to the art gallery.  The works were, for the most part, pretty impressive.  The one that catches your attention first, and most, is called Ash Color Mountains, by Makoto Aida:

The idea behind this is that he’s expressing his disgust with the conformism and lack of individualism of the gray-suited “salaryman”.

These are just a few other images I enjoyed.

And I’m not sure what this is supposed to be exactly, but it was interesting!  The ‘blood’ in the tubes was being pumped, and you could hear the motor and the suction sounds.  I don’t know if I’d want to come across this in the night.

Overall, it was a very pleasant experience and I’m looking forward to going back when they have future events.  It also has me interested in going back to the Metropolitan Museum of Art sometime soon, which is sure to happen, since I have another paper due for my Art History class!

It definitely was! It was hot and fresh too. So hot, I almost burned my mouth because I was impatient and didn't want to wait for it to cool down. =)

Thanks. I'm glad you enjoyed the post. The artwork really was good! I just realized that I forgot to post the picture I took of the harakiri schoolgirls. I'll show you the picture.

nice post and i love those artworks! its amazing and very atypical. the intricacy of that “salaryman” piece is truly impressive!

Ya. It's finally getting warm enough to want to go outside voluntarily again. I can't remember the last time I spent a summer in New York City. I'm looking forward to it!

This looks very cool. That time of the year is coming up again – there's always something to do in NYC but things just seem that much crazier in the warm months. There are free concerts all over the place! Of course, it's very rare I want to go to any of them…

The art was definitely cool. There's another area where photography wasn't allowed that had some cool stuff using light effects. I should try to sneak some video of it or something. hahaha!

There's definitely plenty to do in NYC, if you can find the time.

woah the art is soooo awesome!! Wish i could have gone, New York seems so cool!