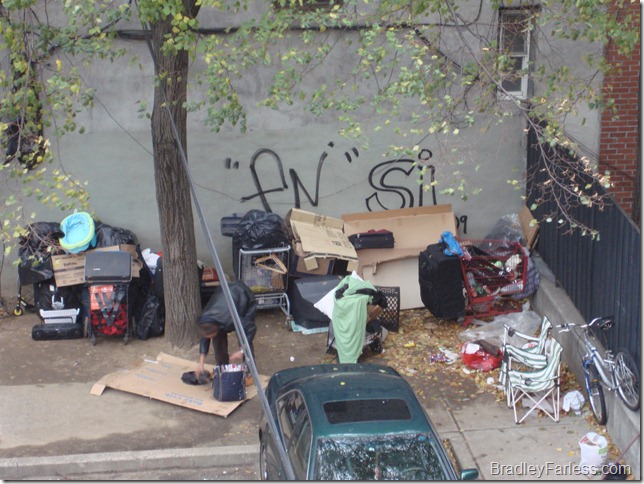 New York City has always had homeless people.  Ever since I can remember I’ve seen homeless people in the streets here in New York.  They used to be a lot more obvious.  You’d see them laid up in doorways or in front of store windows.  Since then, the police have become more active in rounding them up and sending them to homeless shelters.  I imagine the guy in the photo above, who was setting up a ‘home’ for himself in a parking lot is no longer there.

You might wonder why these people would choose to live on the street if there are shelters set up for them, but I’ve heard horror stories about these shelters.  To start with, there are only so many beds available, so you have to be there early to claim one.  You also can’t have anything with any value, because it’s common to be robbed in these shelters, or worse.  I imagine the potential violence a person could be subjected to is much worse for homeless women.  In a way, it’s safer for them to try to find a place in the streets to hole up for the night.  Not that they’re immune to being robbed or abused in the street.

I can’t help but wonder how drastically the level of homelessness has increased given the current economic problems the country as a whole is facing.