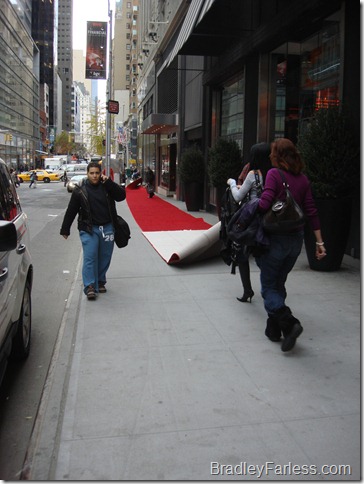 I happened to be up by Bloomingdales today and they were literally rolling out the red carpet. 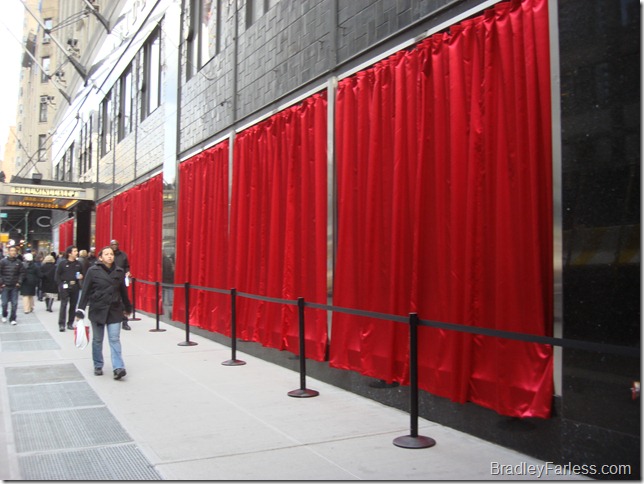 They also had red curtains covering the windows.

I remembered hearing something on the news about Christmas displays being revealed at another store and they made it come across as a big deal.  I’m surprised that in a city like New York, something as trivial as the unveiling of Christmas window displays is newsworthy.  Of course, since it is such a big deal, I’m curious to know what’s behind those curtains myself.  I suppose I’ll see the next time I pass through.

Some people aren’t quite as patient as I am though.  There was some guy walking back and forth.  I thought he was talking to himself at first but then I realized he was holding what looked like one of those Flip video cameras.  Maybe he was using UStream or something, or just recording.  I don’t know.  Anyway, he tried to get in behind the curtain and got shooed away.  He was laughing about it into the camera, saying he got busted trying to peek in.  Later, I swear I saw the same guy on the TMZ segment on Fox 5.  The guy I saw on the street looked just like the chubby white guy on the show.  Could be coincidence.  Who knows?