I opened my e-mail this evening and found this message waiting for me:

Your video, Flexy Girls Performing on Orchard Road, may have content that is owned or licensed by Sony Music Entertainment.

No action is required on your part; however, if you are interested in learning how this affects your video, please visit the Content ID Matches section of your account for more information.

I’ve heard a lot of stories about the music industry trying to claim that people’s home videos contain their copyrighted content for the most bizarre things, like bits of music played in the background, but I never expected it to happen to one of my videos.

Luckily, the video hasn’t actually been pulled.  It has, however, been blocked from playing in Germany, as I found out by following up on the second link, which by the way should direct you to your own YouTube account’s copyright info so you can see if any of your videos have been blocked.  Anyhow, when I clicked the link, this is what I saw: 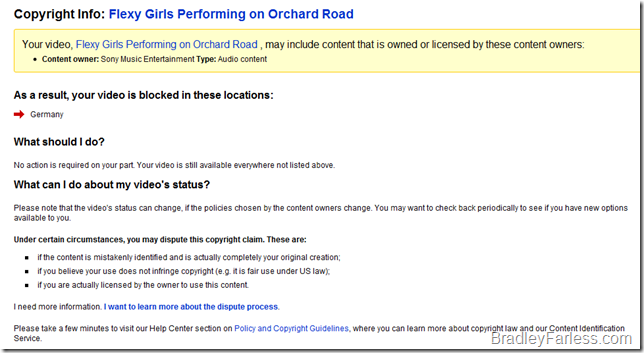 I’ve watched it again just to be sure, but I can’t see that anything here belongs to Sony, other than the fact that it was recorded with a Sony camera, but that doesn’t transfer ownership to them.  Does the tinny Chinese music belong to Sony?  Maybe someone knows better than I do?  And if it does, does this video constitute ‘fair use’ under US Copyright Law?  Should I take the time to dispute it, or is their claim legit?

Here’s the video, of two girls doing an acrobatics performance on Orchard Road in Singapore:

This is some seriously funny stuff. I wasn’t sure about it at first, and you really have to pay attention to understand what’s being said, but you’ll be laughing by the end. You’ll have to understand something about Singapore culture and language to fully appreciate it, I think, but watch it anyhow.

Like the title says, Redux is all about entertainment.  It does it well too.  It’s currently in a private beta, but I signed up for and received an invitation.  I’m not sure how limited the invites are, having picked mine up through a Mashable link, but it’s still a small community.  That small community is pretty dedicated though.  You see people’s avatars popping up all over the place, commenting and giving “props” on people’s shares.

The way Redux works is that it acts as a link sharing center for videos, pictures, and web address links.  If you look at the image above, you can see that across the top of the page there’s a share box.  Whatever you share can be added to your profile as well as to any “channels” you’ve joined.  There are a couple different channels and there’s the option to create your own channel if you want. (See the screenshot below).

The interface is pretty nice.  You can select to see (like I said above) just your Twitter friends’ content, just Facebook, both together along with content from the “channels” you’ve joined under My Network, or if you’re really feeling frisky you can just click “Everyone” and see everything that’s on Redux mashed together into one stream.

I think one of the defining characteristics of Redux is its TV mode.  It works similarly to YouTube’s full screen mode, except it’s continuous play.  You can set TV mode on a particular channel, the Everyone or My Network sections.  It’s pretty versatile, and it’s highly entertaining.  In fact, I would say that once you get it going it’s hard to pull yourself away.  From the full screen mode you can skip back and forth and give “props” to the video.  Unfortunately you can’t comment on it yet, but when I mentioned that via the feedback form I was informed that they were actually discussing implementing that feature and would take my feedback under advisement.  The team seems pretty cool too.  I mean, how often do you get a feedback form from a company that starts off with “Yo Brad, …”?

So, why should you bother to use Redux when you’re already getting this content in other places?  Well, that’s a good question and the answer is that it’s easier.  First off, you can check one place instead of two.  Second you have easy sharing options built in and you can watch it in TV mode.  Another great thing about Redux is that the content you find there is what people feel is worth sharing, which means you’re going to get to skip past most of the frivolous crap.  There are still things there that aren’t going to suit your taste, but that’s why there are descriptions and thumbnails.  You can get an idea of whether or not you actually want to see what’s behind the link.  Also, Redux is another community and another way to meet and engage other people interested in sharing good content.

Oh, and did I mention it looks good?  It didn’t take long for me to figure out the interface and it’s got some great built in backgrounds to choose from:

The only thing I would caution people on is that you shouldn’t run Redux if your laptop isn’t in a cool place.  Watching in TV mode puts the fans on high after a real short amount of time.  Most internet video seems to be like that though.

If you want to give Redux a try I have 5 invites available.  Let me know in the comment section or send me a Tweet at @BradleyF81 and I’ll pass one your way.

This video came to my attention through Twitter via a friend (@LaiSan_C (sorry, locked profile!)).

Apparently, this older guy got so into the music by this local Singapore band that he jumped up in front of the stage and started dancing.  The short of it is that none of this was organized or choreographed and just goes to show that being cool and having a good time doesn’t have an age restriction!

That’s the spirit! A senior audience got up and jumped in front of KKJ’s stage at the Esplanade and started dancing to their original composition ‘Lemonade’. The choreography and the dancing was all improvised as he grooved to the song, to much cheers from the crowd of more than 500.

King Kong Jane was named “Best English Local Act” by The Sunday Times in 2008. In the same year, KKJ was crowned the Champion of Power Jam, one of Singapore’s biggest band competitions. In 2007, the band was chosen to perform for Baybeats, the largest indie music festival in Southeast Asia.

And here’s the video itself!

This is the right way to get your kittens adopted.  You post an ad on your local board, with a link to something like this:

I saw this, got hooked on the music and wound up taking in both Cat2 and Cat3.  The tune is so catchy that you might find yourself humming it after a while.  I plan on setting it as the ringtone for when my wife calls.  She’s a big cat lover.  If you’re curious it’s called Meow Meow Meow by a Hong Kong group called At17.