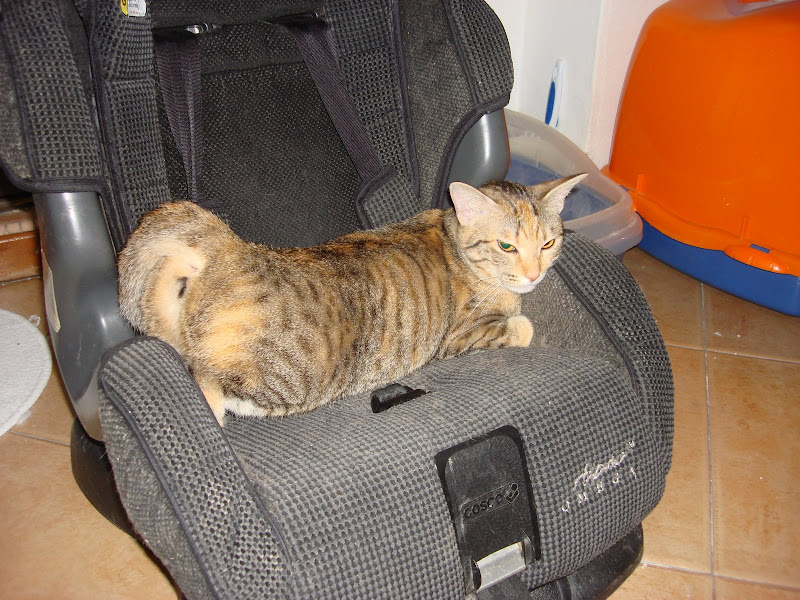 Shortly after returning from a trip to the Philippines at the beginning of last March, our eldest cat, Dapper, went into heat for the first time.  For anyone unfamiliar with the term, it means her hormones kicked into overdrive, turned her into a little hornball and caused her to be non-stop noisy.  In the picture above, you can see her showing off her cat cooter, a typical symptom for cats in heat.  For a week at a time she would be going nuts, and in the process she would keep us up all hours of the night.  It was starting to make us go nuts as well.  No amount of verbal reprimand or slipper throwing would quiet her.  So, after the second time she went into heat I decided something had to be done, and that something was spaying.

Spaying would prevent her from going into heat again, which meant that she wouldn’t be meowing all night and we could get a decent nights’ rest again.  Dapper was one of those unusual cases, in that she would go through a heat cycle, be normal for 3 days, and then start up again.  From what I read, cats typically only go into heat once every 2 to 3 weeks.  Dapper’s hormones must have been working overtime.

Other benefits to getting her spayed would be that she would be in compliance with the Singapore standard.  Cats here are supposed to be spayed at six months, and Dapper was already close to her 1st birthday.  In addition, spaying supposedly lengthens a cat’s lifespan.  Dapper has been with us for a year, and I’d like to keep her around as long as possible.

So, in the spirit of keeping her safe, and keeping us sleeping at night, I looked into getting the operation performed.

Penny To The Rescue!

My wife and I have a friend named Penny that lives in Yishun.  She’s something of a fanatic when it comes to taking care of cats, but in a good way.  She lives a quiet life and dedicates the vast majority of her time and funds to caring for, as well as spaying/neutering the local feline population.  I’m not quite sure where she gets her funding from, but she seems to have made it her mission to spay or neuter the entire feline population of Yishun, and she’s well on her way to accomplishing that goal.  I imagine she gets donations from individuals who have money, but no time, whereas Penny has time, but lacks funds.  So, that works out pretty good.

On average, she manages to spay or neuter an average of 8 cats per week.  Typically, having a cat spayed or neutered can run you between 80 to as high as 179 SGD, depending on where you go.  Shocking, right?  Due to the volume of cats she brings in, she has a special deal worked out with Mount Pleasant Animal Clinic to have the operations performed for 50 SGD per cat, or 70 SGD if they’re brought in pregnant.

We took advantage of this fact and talked to Penny about having Dapper brought in for spaying.  Doesn’t hurt to use a discount if you have one available right? She was happy to help out and we agreed to meet the following week in Yishun.

Well, Dapper had one last trick up her sleeve for me, and it wasn’t good.  The day after I made arrangements to have her spayed she went into heat again.  I had read that having a cat spayed while they were in heat could cause complications, and could be more expensive, so I was worried that it would cause problems with the arrangements I had made.

My wife was urging me to put off the operation, but I decided to wait it out and see what happened.  With Dapper going into heat so frequently, lining up a time when she was ‘normal’ and when Penny was available seemed like a tricky business.  Thankfully, the night before her operation, her heat cycle ended.

The morning of Dapper’s operation I got up early to make sure everything was ready.  I’m sort of a night owl, so I didn’t get much sleep, but I was anxious to get the whole thing over with.  After getting ready, I brought down the cat carrier from on top of the wardrobe.  Being the busybody she is, Dapper immediately came to investigate.  I decided to try to take advantage of the situation and opened the carrier door and took a step back.  Sure enough, she went ahead and poked her head into the carrier, giving me a hassle-free opportunity to push her the rest of the way in and get the door closed.

So, Dapper and I made our way to Yishun and met up with Penny, who was waiting for me at the McDonald’s at Northpoint Mall.  She had three other cats with her, each in their own carriers.  We hopped onto a bus which would take us to the clinic.  We were an interesting sight, carrying two cat carriers each, and with my being a caucasian foreigner on top of it.  Despite it not being necessarily illegal, it’s still an uncommon sight to see cats on the bus, much less four at a time.  Most of the passengers were amused and some even made “meow meow” sounds to try excite the cats.  Dapper took it all well, and laid down quietly in her carrier.  I think she enjoys the vibrations from the bus.  Penny’s lot, on the other hand, were noisy and terrified.

We reached the clinic after a short ride and I stroked Dapper for a while before passing her into the hands of the vet.  Hey, you never know.  What if something goes wrong, right?  Dapper is a very sweet cat, even if her horniness was driving me crazy.  I left the clinic hoping for the best and went around the corner with Penny to sit down for a while.

There is a hawker area right next to the clinic and Penny offered to buy coffee.  I’m an avid coffee drinker, so I couldn’t turn her down.  It turned out to be a great way to spend an hour.

We got to talking, and Penny’s a very interesting woman.  We’d spoken briefly before, but never at any length or about anything other than cats.  She’s very outspoken and she has a lot to say, not just about cats, but about Singapore, and life in general.  The most amusing point of our conversation was that she hopes to travel to Australia and snag herself an eligible bachelor that she can settle down with.  Coming from Penny, with her blue-highlighted hair and no-nonsense attitude, it seemed so out of place that I still smile when I think about it.

As we finished our coffee and it got close to lunchtime, we decided to get going and agreed to meet up again at 3:30 to pick up the cats.  I took the opportunity to go back to Tampines and meet up with my wife during her lunch break to check out the new mall, Tampines 1.

When we went back to pick up the cats, Dapper was awake in her carrier, if you want to call it that.  She was in an anesthetized daze, watery eyes and all.  Of course, that’s to be expected right after a surgery. 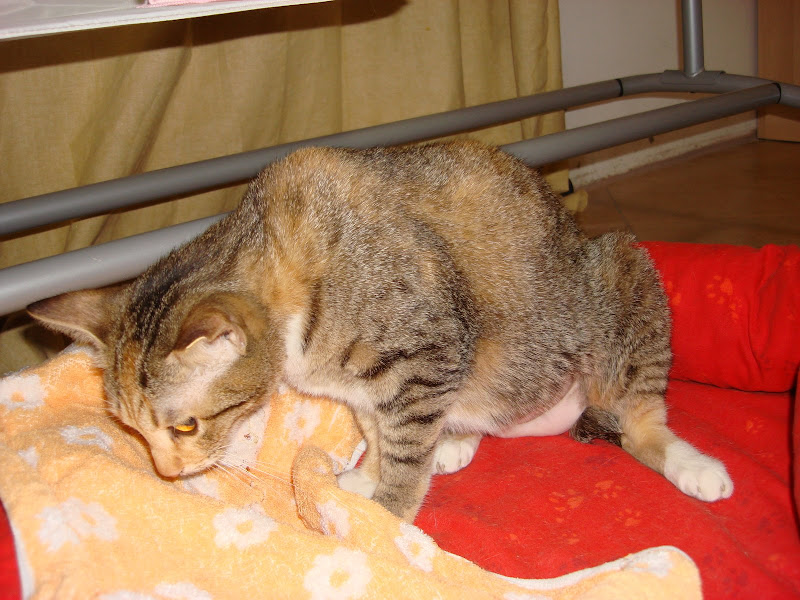 When I got her home later, she seemed unsure of where she was, and she couldn’t seem to stand up, so I put her in her cat bed and put the food and water bowls right next to her.  She tried to walk a bit later but kept falling over.  Eventually she made it to her litter box and after about 20 minutes managed to … well you know.  Then she went back to her bed and slept for about 8 hours.  Every so often she would wake up and try to walk around.  Then she would go back to the cat bed and go back to sleep.

I stayed up, keeping an eye on her and eventually tried to spark her appetite by giving her wet food.  She sniffed at it a bit, but didn’t seem to be too interested.  I think our kitten, Thumper, wound up eating it all. 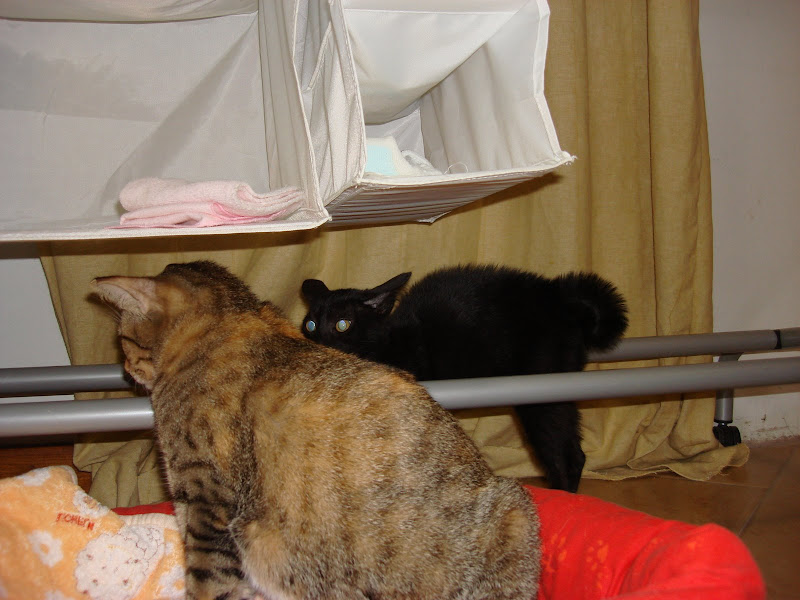 One interesting thing to note about this whole trip to the vet is that when I brought Dapper home, Thumper initially had no idea who she was.  Dapper was only out of the house for about 10 hours or so, but Thumper initially reacted as though we’d brought home an entirely new cat.  It was strange and a bit upsetting.  Thumper made that strange mewling sound that cats make when they’re pissed or trying to look tough around strange animals.  Dapper seemed a bit perplexed by Thumper’s reaction but wasn’t very interested in anything other than sleeping at the time, so she ignored her.

Eventually, Thumper started trailing after Dapper, watching her whenever she would visit the food bowl or the litter box.  I think Dapper came back carrying the scent of other cats and Thumper viewed her as an outsider, a crazy one, that was helping herself to her and  the real Dapper’s territory.  Eventually those other scents must have faded, because the following day I woke up to find the two of them curled up next to each other.

It’s been almost 6 days now since her spaying.  She still seems a bit odd, compared to usual, but every day she seems to get a bit more active.  Today, she started to playing with Thumper again, which is nice.  Thumper was starting to get annoyed because he would try to get Dapper to play with him and she would smack him in the head and lay back down.

One thing I definitely miss about her is her friendly meow when she wants you to pet her, or when she greets you at the door when you come home.  Since her spaying she’s only meowed once, and that was tonight.  Hopefully, she’ll be back to her old self before long.

I can’t help but wonder what the longterm effects of the spaying will be on her personality, but for now she seems to be coming back to herself, much to my wife’s relief.  According to her, spaying isn’t a common practice in the Philippines, so I think she was more worried about the whole thing than I was.

It seems like every time we get one thing taken care of with our two cats, another problem crops up, resulting in another visit to the vet.  Dapper came back from her spaying with a dry, hacking cough.  I think she might have picked it up from one of the other cats at the clinic, and fromw hat I’ve seen on the internet it’s probably an upper respiratory infection.  Coupled with the fact that she’s recovering from surgery, it’s starting to get bad.  So, tomorrow she has to take another trip to the vet with me.  I wonder if she’ll be as willing to get into the carrier on her own this time?

Taking on pets is definitely a big responsibility, both in time and care as well as financially.  Still, she’s part of the family and I can’t stand to see her coughing and hacking like that, and I’m anxious to get her checked out.  At first I thought it was a side effect of the surgery, but now I’m almost positive it’s not, and I don’t want to take any chances.

Hopefully this will be the end of their vet visits for quite a while though!