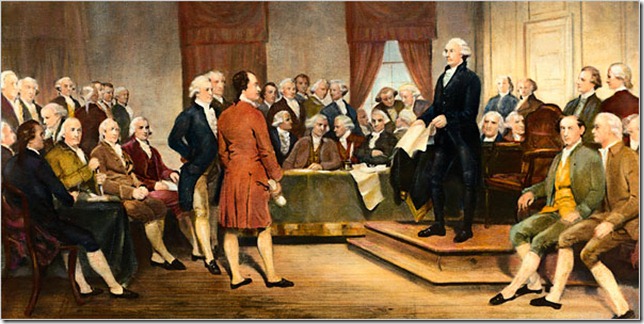 Someone I know was complaining on Facebook that people are forgetting that the US was “built on God but we can’t even pray now.”  I’m taking a US Government and Politics class right now, so this is fresh in my mind, and I think that people are forgetting what the country was founded on.  It wasn’t founded on God.  The country wasn’t built on God.  In fact, there is no mention of God, Christ, or Christianity in the Constitution or the Bill of Rights, and there are reasons for that.

The only mentions of religion in the US Constitution and Bill of Rights are in Article 6, Clause 3, which says no religious test will be required to hold an government office, and in Amendment 1, which prevents the establishment of a national religion or government restriction of religious practices

The Senators and Representatives before mentioned, and the Members of the several State Legislatures, and all executive and judicial Officers, both of the United States and of the several States, shall be bound by Oath or Affirmation, to support this Constitution; but no religious Test shall ever be required as a Qualification to any Office or public Trust under the United States.

Congress shall make no law respecting an establishment of religion, or prohibiting the free exercise thereof; or abridging the freedom of speech, or of the press; or the right of the people peaceably to assemble, and to petition the Government for a redress of grievances.

Some of the foundering fathers were Protestant Christians for sure, and likely they didn’t expect the encroachment of non-Protestant Christian religions in US society, but they did see the necessity of ensuring that the government couldn’t make any decisions regarding religion, which I think includes not allowing the government to give any indication that it sponsors one religion over another.  The reason for this is that they were quite aware of the abuse of the system in England, where the English monarch was also the head of of the church.  This gave the government far too much power over people.  It’s better for people to be able to have the freedom to make their own choices in regard to religion, without having any one brand of religion forced down their throats by the government.

The Pledge of Allegiance was written in 1892. During a religious revival, “under God” was added in 1954, but, since that implies state sponsored religion, it’s a violation of the 1st Amendment and shouldn’t have been added in the first place.

The US wasn’t founded on God. It was founded on the principles of freedom and republican democracy.  However, I think our government is being too aggressive in telling students that they can not pray if they want to in a school. To me, that impedes practice of religion, since praying in school voluntarily isn’t hurting anyone, or implying sponsored religion. People should be free to worship, and the government should never imply that it sponsors a particular religion, but it also shouldn’t be preventing people from having an opportunity to pray, meditate, have an out-of-body experience, mentally prepare for the day, review notes, etc.