The Philippines is sometimes called the texting capital of the world and from what I’ve seen it’s true.  People in the Philippines, and Filipinos in general, seem to text non-stop.  In the US, it’s most common for people to have contract based plans with cell phone carriers and those plans usually have plenty of, if not unlimited, voice minutes.  Before coming to Asia, I can count the number of times I sent a text message on two hands and those were because someone texted me first.  Since then I’ve sent thousands, sometimes upwards of 200 per day.  Texting is the preferred method of communication in the Philippines, and other parts of Asia I’ve been to, mostly because it’s cheaper than voice calling. 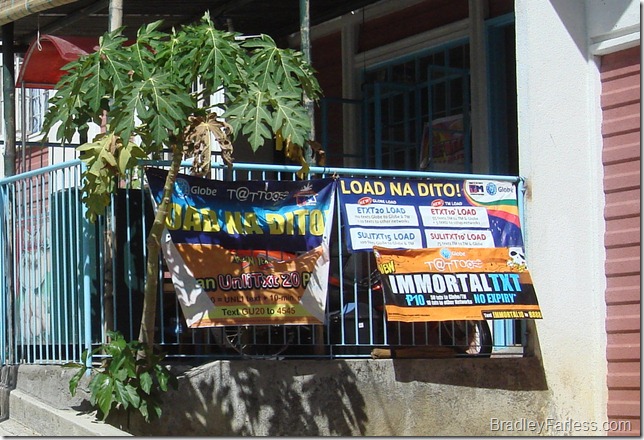 Like I said, in the US most people have contract based plans.  Now, texting is catching on and people have the option to get unlimited texting packages added to their monthly bill.  In the Philippines, the majority of people don’t have contract plans; they use pre-paid instead.  If you’ve never heard of that, pre-paid is when you pay the carrier, either by purchasing a card with a set value, through an ATM, Internet banking, or even through distributors / resellers that can transfer value to your phone.  In the Philippines, this value is referred to as “load”.  That’s why when you look at photos of the Philippines you’ll often see signs that say “Load na Dito!”  It means “Load Available Here!”.  You can go to those stores and have value added to your prepaid SIM.  That’s another thing.  Phones in the Philippines are all based on GSM / SIM cards.  There’s no CDMA like Verizon and Sprint use in the US.  At least, not that I’m aware of.

Now, I want to say that only an idiot would fall for these scams, but the fact that it’s an ongoing problem shows that people do in fact fall for them and fairly regularly.  The exact wording of the scams vary, but it usually goes along the lines of a ‘friend’ loses their phone and gets a new one, but needs you to send them ‘load’ until they can get their own and pay you back.  Sometimes they add a name to the text message, so that in the event the recipient does know someone by that name, they’ll be more likely to follow through and send a transfer.

I’ve probably received 20 or 30 messages like this in the past 4 months.  I deleted most of them, but here are some recent samples: 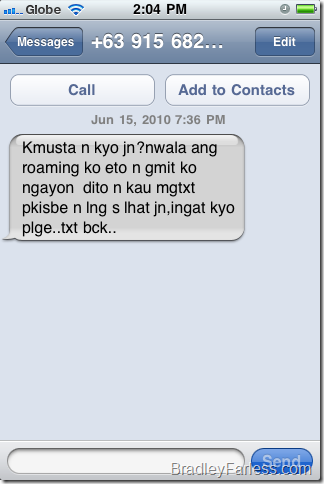 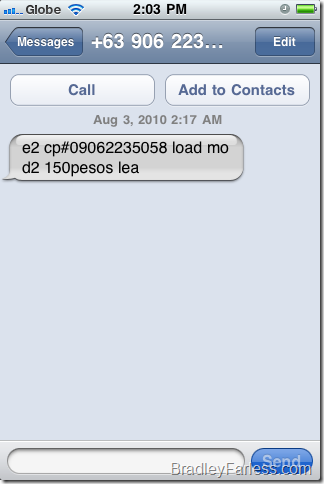 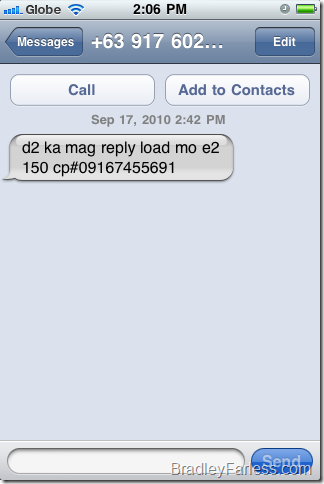 If you ever happen to visit the Philippines and you have a GSM phone, it’s easy to get a prepaid SIM to use while you’re in the country.  Just be aware that you’ll likely find yourself receiving messages like this and you shouldn’t fall for it.  Of course, it’s more obvious if you’re just a tourist because who else would you know here that would ask you for load?

In the Disney movie Aladdin, the idea of being a “street rat” was glorified as an honorable way of making a living, with a code of ethics and a comfortable life.  In reality, things don’t work out quite that way.  I’ve seen poor people on the street here in the Philippines and they don’t look like they’re having quite as good a time as Aladdin was.  They’re dirty, they’re hungry and they live in a way that’s dangerous because at any moment of the night someone could take their lives.  It’s not that adventurous when you think about it.  It’s a torment that must be a horrible way to live.  Even at my worst, I’ve always had a roof over my head and a little something to eat every day.  So, I have pity for these people when I see them in the street.

In the Philippines, and perhaps everywhere, that pity has to be tempered by wariness about the real nature of the person holding the cup or the annoying children that flock around me like little vultures.  Here in the Philippines there are organized begging rackets where beggars are put out on corners like a pimp would set out prostitutes in other parts of the world.  The individuals doing the begging are made to look more forlorn than they may actually be, and some of them may have homes that they go home to in the evening.  Most people probably learned about this activity by watching the movie Slumdog Millionaire.  The same practices you see in that film are employed in the Philippines.  So, you can’t be too free with your money when you see these types of people coming up to you in the road, or holding a cup out to you in front of a store.

The ones that really annoy me are the groups of kids that try to surround you and start asking for money.  They even go so far as to start grabbing at your clothing.  My guess is that this is to distract you while their friends start fishing in your pockets for whatever they can grab and run with.  When I first visited the Philippines in 2008 I had a lot of patience for this sort of behavior, to the point that it annoyed my wife.  She always shooed them away as fast as possible.  I didn’t really care.  My attitude about it has changed now though.  I suppose that when you visit a place, those minor inconveniences seem quaint and entertaining, but when you actually move to that place and you know it’s something you’ll have to deal with on a repeating basis, the patience you had before wears thin quickly.  Now, when these kids surround me and start asking for money I give them a very gruff, ‘”No!” and keep walking.  If they persist, or start grabbing at my clothing, I push them away physically and tell them to “Fuck off”.  That message normally gets through to them and they break off their pursuit, often accompanied by a string of expletives in Tagalog, the local language.  I suppose that they think that just by being white, I must have tons of cash and I’m just holding out on them.

If you think that’s a little rough, given that these are kids, keep in mind that it’s typically organized.  They do it every day.  They beg as a job, rather than out of necessity, and I’d rather come across as a jackass than have my belongings stolen from my pockets while trying to play nice.  Life in the Philippines isn’t just hard because the money is worth less, it’s hard because you have to be hard to survive when you’re out of the house.  No one has bottomless pockets and every peso counts.