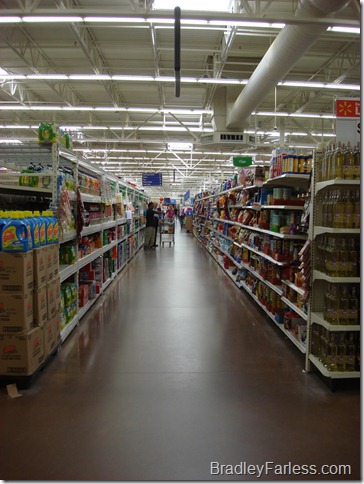 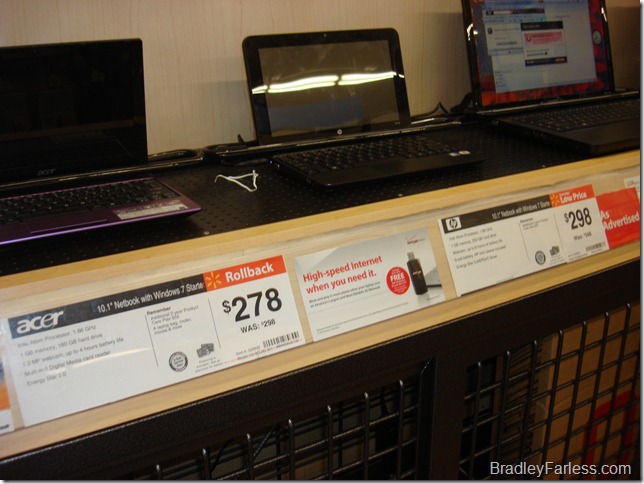 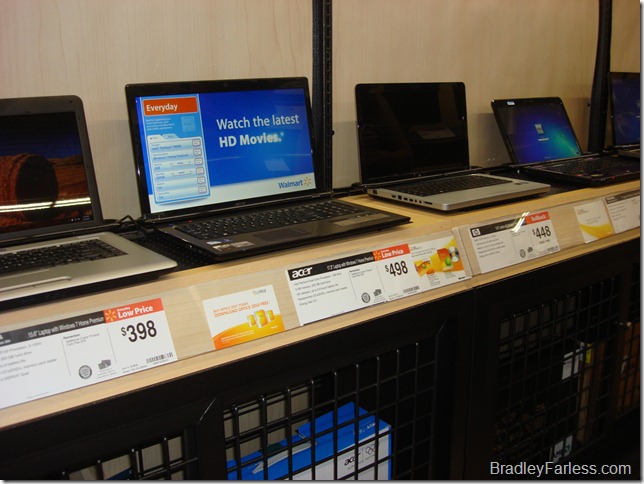 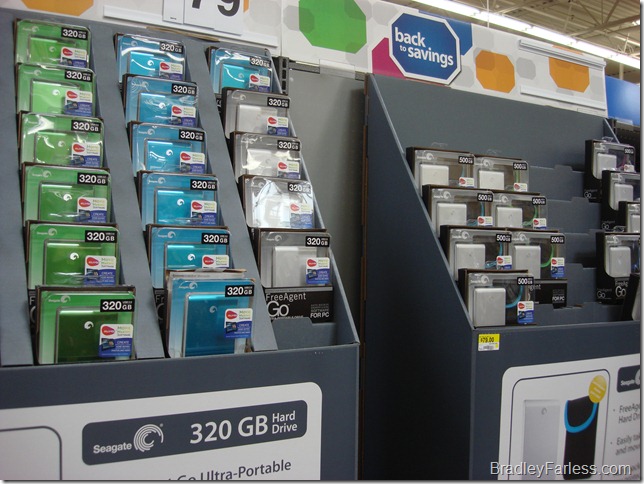 I was looking through the electronics section at Wal Mart and noticed the prices on the 320 gb and 500 gb Seagate external hard drives are a little weird: 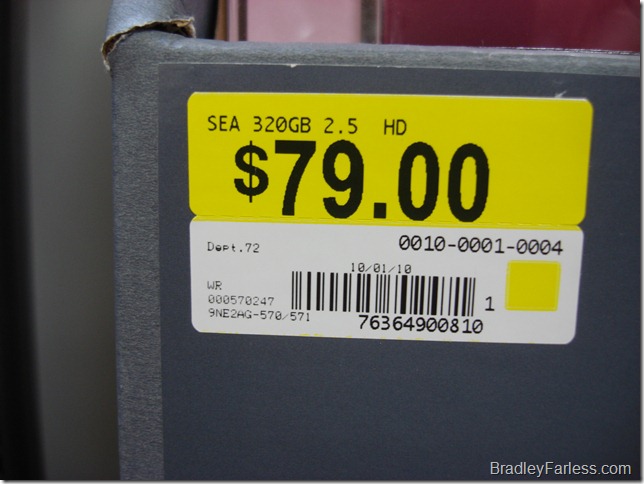 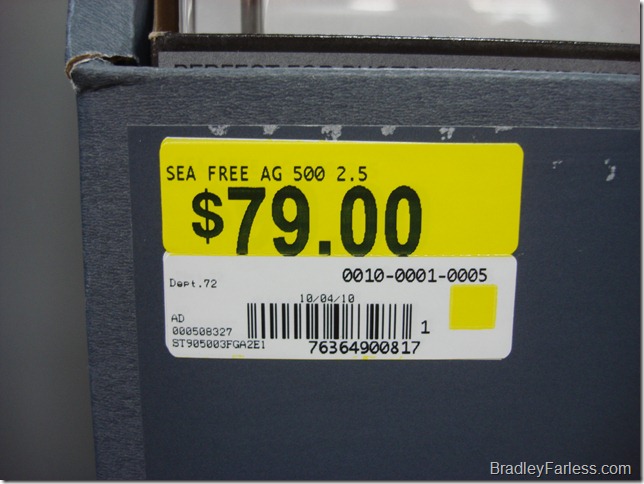 Maybe one price is wrong, or maybe they’re really charging the same amount for both hard drives.  Who knows?  Regardless, I know I’d rather get a 500 GB hard drive if I’m going to pay the same amount for a smaller one.  The only difference I could see is that the 320 GB version had more variety in colors.

One of the things you might often here myself or my wife saying as we walk along the aisles in a store or supermarket is “It costs how much?!” One of the hardest things for me to get used to is the difference in the value of the currency. So, costs initially seem high to me on first glance. Often, after I take the time to pull out my phone and check the conversion rate, it’s not as bad as I had thought. Sometimes it’s still priced higher than what I’m used to, but you also have to consider import fees. On top of that, there’s a 7% GST (goods and services tax).

Sometimes though, I just can’t figure out where the difference in cost is going. Sometimes I think it’s just a matter of merchants overcharging because they can. It’s as if anything that even hints of luxury here, whether it be a pair of Asics (225 SGD?) or a pair of jeans (120 SGD?), gets a hefty price tag put on it.

One way to get around this is to keep an eye out for sales. This is also one way I’ve determined that ‘normal’ prices are often too high. The sales will often price items at 50% or more below the normal price. Now, you know that even if there is a sale, the company still wants to make a profit, and if they can make a profit at 50 – 60% off, then the ‘normal’ price is a bit steep. That’s fine. That’s just how it is here. It just teaches you something, and that’s to keep an eye on flyers and make sure you know when there’s going to be a sale on an item you’ve had your eye on.

So, when you’re walking around in Singapore, don’t go nuts when you see the prices. Remember the conversion rates, remember the import fees, and remember to wait for the sales.

Despite knowing all that, sometimes I’m still shocked, like when I saw these cereal prices:

And it’s not just the Cheerios. Have a look at some of the other items along the shelves in this photo:

As much as I love them, I’m not going to pay over 10 bucks for a box of plain Cheerios. I mean, they weren’t even Honey Nut Cheerios. Don’t these go for about 3.50 or 4 dollars a box in the US? I decided to be reasonable and I got the 5 dollar box of Capt’n Crunch instead. That’s a decent price, and the stuff is good!

I used to be a pretty big fan of Starbucks.  I would stop by one when I had time, or when I happened to be near close-by, to get a cup of “fancy” coffee.  I didn’t go often, because of the price, and because there usually wasn’t one that close to where I lived.

What did I like most about Starbucks?  Well, the coffee was decent, but it wasn’t really that great.  The atmosphere in the store is nice, but I never really hung around.  Most of the time I would go through the drive through, or, if I were in a mall, I would get my coffee and get out.  So… what was it?  After spending some time thinking about it, I realized that the only reason I really went to Starbucks is because of effective marketing.  It wasn’t for the cheesy atmosphere and it definitely wasn’t for the so-so coffee.  It was because of how I viewed myself when I was standing there holding a cup with the Starbucks logo emblazoned on it.  Starbucks managed to effectively market itself as a prestigious, premium coffee seller, and because of that, I felt as though I were treating myself to something nice when I purchased their product.  It’s not really bad.  I can’t call them evil for it.  It just means that they did their business the right way and used effective marketing plans.

Having realized that, and having realized that there are far better coffees available than what they offer, I’m no longer as interested in going there anymore.  That’s right!  I’ve found a coffee that is far superior to what Starbucks offers, at a fraction of the cost.  It’s called Kopi O, and it can be found at any hawker center in Singapore.  You won’t be served by a fancy “barrista,” you probably won’t have air conditioning, and I doubt you’d find free wifi (though most wifi in the US locations isn’t free anyways), but you’ll get a damn good cup of coffee that will certainly hit the spot after a meal, or along with your breakfast.

I’m sure those of you in other countries are wondering how that helps you, but use it as an example.  The best coffee, or really the best of anything doesn’t always come with the highest price tag.  So, get out there and take a few chances and explore smaller shops to see if they have a better version of what you’re interested in.

As for myself, I’d take Kopi O over Starbucks any day, which is why I’m glad I found this fantastic little store in the Downtown East mall:

It sells the same stuff as the hawker stalls that sell Kopi O, but it’s located inside the mall.  The prices are a bit higher, but only by about 30 to 50 cents, which is ok, considering its location.  When my wife and I visit the mall to see a movie, we can buy our tickets, have dinner, and then hang out at this little coffee shop while we wait for the show to start.  Oddly enough, this Kopi Alley store is located right next to The Coffee Bean ( a Starbucks clone for those of you not familiar with it), but that doesn’t seem to be hurting its business any.

Differences in prices between locations is nothing new to me, but I was shocked to see the price of alcohol and tobacco products in Singapore.

I spent most of the years I lived in the US in the southern states, where prices are more reasonable, due to lower taxes. I won’t go into the “when I was younger” stuff, but when I left the US in 2008 you could get a pack of cigarettes for about 3 dollars in Texas. It was about the same in Georgia. When I would visit my mother in New York City I would typically bring cigarettes with me, because they’re about 7 dollars a pack there, which I thought was ridiculously expensive. Beer is about 5 to 6 bucks a pack regardless of where you are in the States.

So, like I said, I was used to seeing different prices for these items. Still, I was shocked when I saw that in Singapore the average price for a pack of cigarettes is 11 Singapore dollars and the average price for a six pack is about 15 to 18 Singapore dollars. I had to wonder why the prices were so high, and after having spent some time here, I think I’ve found the reason. Singapore is a country that prides itself on cleanliness and that carries over into a push by the government to promote healthy living.

That’s not all bad, of course. I’ve never seen a place with so many parks, free work-out areas, and playgrounds, all of which are kept in near pristine condition. On top of that, each regional area has a gym and pool, which have very low entrance fees. If you’re a swimmer or you like to work out in a gym then you’ll definitely appreciate the Singapore government’s health initiatives.

On the other hand, the Singapore government has also put steep taxes on the alcohol and tobacco, to influence people to use them less, if not quit entirely. Again, that’s not exactly a bad thing. However, for foreigners who come to Singapore to live, it requires a slight lifestyle modification.

I never really drank much anyways, so cutting alcohol almost completely out of my life didn’t phase me. The cost of the cigarettes, though, makes my wallet cry. It’s hard to go from carefree smoking to counting your cigarettes and counting your puffs. I remember tossing half smoked cigarettes into butt cans on my way into buildings, but now I stop to finish the cigarette before continuing.

So, if you move to Singapore and like to drink and smoke, expect the amount of time you spend partying to get cut down. On the bright side, you can take advantage of the convenience of the gyms and pools to get back into shape, so you can look good when you take vacations to the numerous, gorgeous beaches in the Southeast Asia area.