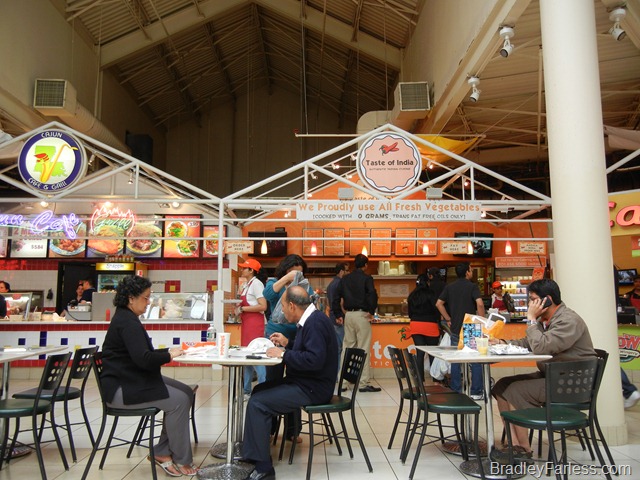 I went up to the food court at the Newport Centre Mall for the first time last weekend.  I saw some old favorites that I hadn’t been to since before I left the US for Kuwait in 2007 and I was pretty sure I was going to wind up eating at Sarku Japan.  It’s not real Japanese food, but it tastes pretty good.  Then I saw a place called A Taste of India: Authentic Indian Cuisine.  I went over and they were handing out free samples of chicken.  It tasted pretty good, but I wasn’t really convinced.  Then I saw that they had chicken biryani, and I wondered if it was anything like the nasi briyani I’d had in Singapore.  I asked for a sample and while it wasn’t exactly the same, it was really close and really good.  It was really spicy too! 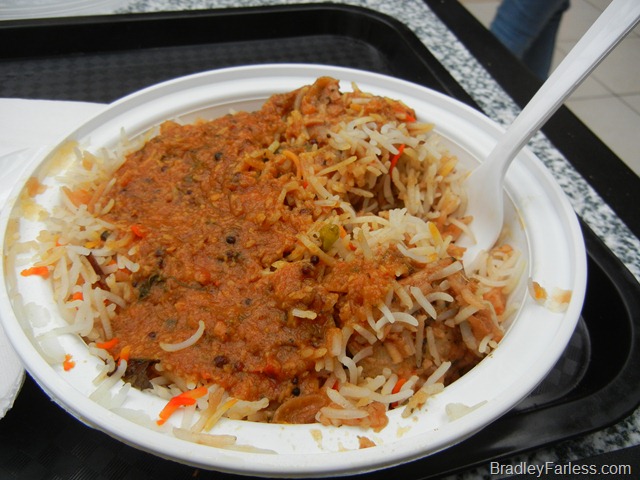 I wound up getting a bowl of it, with spicy curry on top.  It doesn’t look too appealing in this photo, but most of the foods I ate in Asia tasted better than they looked anyway.

Something about the restaurant was kind of jarring.  They all seemed to be first generation immigrants, judging by their accents, possibly from the same family.  The way they were working the crowd and cajoling people into taking samples and then buying food from them reminded me of street vendors in the Asian countries I’d visited.  They could have just as easily been on a street in Kuala Lumpur or a food court in Singapore.  The weird part is that they were all wearing cheesy looking, brightly colored, standard uniforms.  I guess it was something about the authentic taste of the food and the authentic behavior of the employees clashing with the American franchise store and uniform designs that threw me off.  I suppose it doesn’t matter though.  I paid for good food and that’s what I got.