Yesterday I went to Petco at Union Square to pick up two 20 pound boxes of cat litter while they were on sale.  Carrying that cat litter was a pain in the ass because I couldn’t get a cab and had to take the bus, but that’s another story.

On the way to Petco, I noticed a lot of people standing around the 14th street side of Union Square with signs.  I’m not surprised.  It seems like there’s a protest there at least once a month or more.  There was a protest there over the Trayvon Martin incident, for example.

I can only assume this group is protesting police brutality, but I didn’t stop to ask for specifics.  There was something about the way most of the people looked, the way they carried themselves, that screamed low class and potentially dangerous.  One guy looked homeless and the girl in the purple tube top (just to the right of the pink tree on the left of the photo) kept pulling her top up and down, like she was moments from stripping naked to add flavor to the protest.  I wondered if they were drunk or on drugs.  I know it’s not good to just throw a judgment out there based on how people look, but on the other hand, if you want to be taken seriously, you should look serious.

The group of people protesting wasn’t actually that large.  It’s hard to tell from the photos where the protesters end and the normal Union Square crowd begins, but they mostly seemed to be huddled into one corner near that pagoda subway entrance.

There were police hanging around and I had things to do so I just minded my own business and kept going.  The reason I wonder if these people are trying to ‘occupy’ Union Square is because I saw them there again today, including the guy that looks homeless.  He had a ruck sack with what looked like a yoga mat.  Maybe he slept on it?  Also, a few of them seemed to have luggage with them (right side in above photo).  The police were still there today too. 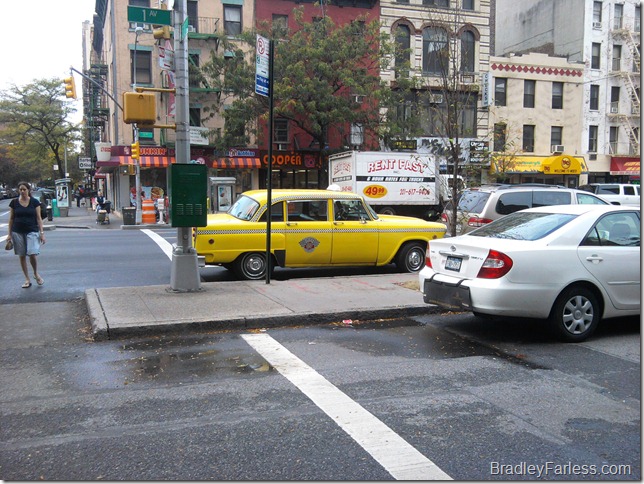 I saw this old fashioned taxi cab parked on the side of the road.  I assume it’s still being used, but I could be wrong.  Maybe someone bought it and is using it as a personal vehicle and they enjoy the novelty of driving it.

I don’t ride in taxis much here.  They’re way too expensive.  With a little foresight and time management, you could save yourself 20 dollars or more and just take the bus or train.  I guess a lot of people do use them though, because sometimes I get the impression that there are more taxis on the roads here in the city than any other types of vehicles combined.

Singapore was the first place I got to sit down at a fancy restaurant that was designed just for the purpose of serving ice cream, like the Haagen-Dazs restaurants that are so common here in Singapore.

There are, of course, places like this in the US, but they’re mostly in major cities like New York City.  I wasn’t aware of them, so I never went to visit one.  I thought the ice cream you get in the grocery store was only available in the grocery store.

There were ice cream places I went to like Baskin Robbins, Brewster’s and Marble Slab Creamery, but these places are set up as fast food ice cream parlors.  The seats, if there were any at all, are the hard plastic kind that encourage you to enjoy your ice cream, but to do it quickly and make room for the next person.

Since I’ve never been to a Haagen-Dazs restaurant in the US I have no basis for comparison but the experience here was a good one.  The seats were cushioned and comfortable, the table we chose was low-set, and the dishes and silverware were good quality.  The ice cream was served with presentation in mind too.  So, eating Haagen-Dazs ice cream in Singapore can be a very luxury experience.

Unfortunately, it comes with a luxury price tag as well.  The two plates shown in this post came up to around 42 SGD (about 29 USD) and I remember being stunned at the bill.  In the US you can get a half-gallon of premium ice cream for about 13 or 14 bucks.  Or at least you could the last time I was there.  I’m finding out that a lot of foods I took for granted as being cheap in the US are a lot more expensive abroad.  I think it has a lot to do with how the corn industry is subsidized by the government in the US.  Ya, that’s kind of a weird stretch, right?  Watch Food Inc. and you’ll understand what I’m talking about.

Anyway, it’s still a nice way to pamper yourself from time to time, if you have the money to spend.

One of the things I’ve been unable to do since moving to Singapore is locate a great pizza. I mean a great pizza that tastes like a slice of pizza I could get in New York City. I know that’s not likely to happen, but man, I was hoping for something close at least.

There are Pizza Hut franchises here, but they’re just not the same. They use a different type of tomato sauce and they use a lot of weird ingredients that you’d never find on the menu in the US. I never liked Pizza hut anyway, since it’s so greasy. The last time I ate at a pizza hut was in Alabama and I literally used a napkin to sponge the grease off of it before I ate it.

In the US, my preferred pizza, as far as franchises go, is Papa John’s. That stuff is just plain good!

Here in Singapore, I’d take just about anything.

There’s a Sbarro’s in the Philippines that I ate at. It was great! There’s another restaurant there that looks good too, an Italian place, but I just can’t remember the name of it. I haven’t been able to try it yet, but hopefully the next time I’m there I will. I have a craving for Mexican food too, so hopefully we’ll get to stop by Mexicali. Not sure when that’ll be though, since my next trips are lined up for Phuket and maybe Bali or Sabah.

But… my quest for great pizza in Singapore is still incomplete. I thought I might have found a winner at a restaurant called ‘New York, New York’, but it wasn’t quite up to par either.

To start off with, the pizza was really greasy. You can see that in the photo. The second problem is that the sauce was put on so lightly they might as well have just excluded it from the recipe, and what sauce was on there wasn’t very tasty. I guess they missed the whole part about pizza sauce having spices and being more than just tomato sauce.

The worst part is that we had to pay 13 SGD for this disaster and it was only 9 inches in diameter.

Oh, and speaking of ‘diameter’, our waiter didn’t understand what the word meant. He got so confused that he wound up telling me that they only sold pizza by the slice and that the slice was 9 inches long, and cost 13 SGD. I told him to go get a manager and the manager was able to clarify for me. Plus, I just wanted to point out to him that his waiter should at least know what’s on the menu.

The closest I’ve seen so far is that ‘Canada Pizza’, I think it’s called, but it wasn’t good enough to make me want more.

On a positive note, I heard from another person’s blog (An American Girl in Singapore) that there’s a Dunkin Donuts in the new Ion Mall down on Orchard. That’s GREAT news. The donuts at most shops here in Singapore are just… too much I guess you could say. They’re overdone with icing and overdone with fillings and way too sweet to the point they’re not even good anymore. Some of them are so bad you might as well just be eating a big ball of sugar. The mom and pop bakeries here, on the other hand, don’t put enough and you wind up feeling like you’re just eating plain dough. Dunkin Donuts is a franchise though. They should get it right, because it’s a standard recipe. I can’t wait to get down there and check to see if they have Bavarian Cream!

(A photo of the last Dunkin Donuts we had in Kuala Lumpur’s airport a few months ago)
If you enjoy reading articles about pizza, you might enjoy THIS great article about a Singaporean’s search for good pizza in Italy. It’s quite enjoyable and funny!