Just up the road from us there’s a Rite Aid. The place looked pretty sleazy when we first moved in, but over the last few weeks they really fixed the place up. It looks modern and new and doesn’t have that cramped, dirty feel to it anymore. In addition to fixing up the outside of the store, the management decided to turn the dingy, yellowing paint on the exterior of the building into something fresh and new.

We walked up on these guys spray painting the outside of the building in the evening. It seems as though they were given a lot of freedom in their choices, but they did have to redo a portion of their mural which contained a space ship. Apparently, that wasn’t what the Rite Aid management was aiming for.

The finished product is pretty cool. I wonder if people are doing this outside of New York City now, and especially down south? I don’t remember graffiti being recognized as art or encouraged down there. Not that anyone in Georgia was painting murals like this, or anything on par with most of the graffiti in New York City, anyway. 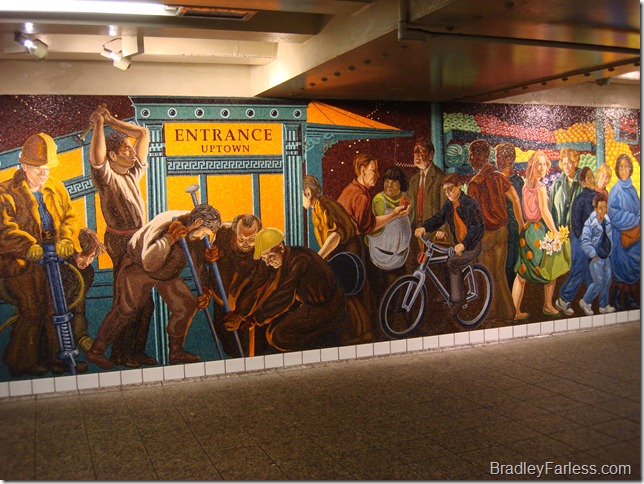 I happened to see this glass mosaic when I came up the stairs from the 1, 2, and 3 train platform, heading towards the N, Q, and R train platform.  I’m surprised I’ve never seen it before, but the place is usually packed with people, so that’s probably why I overlooked it.

Times Square station is surprisingly drab, with a lot of uninspiring colors and unadorned walls.  You’d figure the place would be better decorated, if only to drive more tourism.  The plainness of the station really made the bright colors of this mural stand out.

This is the accompanying plaque, which is located on a central pillar in the middle of the hallway the mosaic is in: 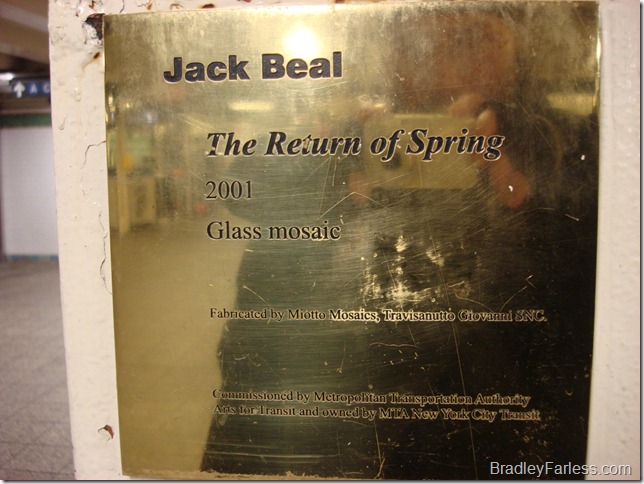