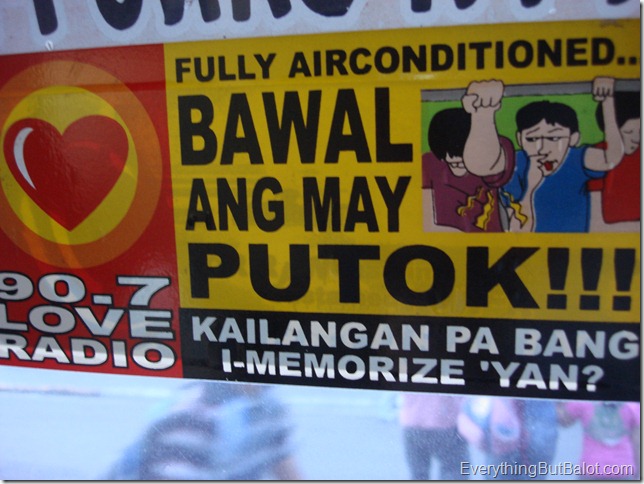 People smelling horrible in public transportation is something that I, unfortunately, had to get accustomed to in Singapore.  I don’t know why, but even with constant running water and plenty of soap being available, some people in Singapore have no clue when it comes to personal hygiene.  I’ve heard some people try to use the heat as an excuse, but it’s just as hot in the Philippines and I’ve never felt my nose and eyes burn and water just from the stench in public transportation here.  (Yes, I’ve been on the jam-packed Manila trains.)

I took the above photo in an FX, a popular form of transportation for long distances here in the Philippines.  The sticker is a handout from a radio station.  It serves a dual purpose as both an advertisement and a warning to passengers.  The large lettering in black on a yellow backgrounds translates to: “Bad armpit odor not allowed!”  Thankfully, I haven’t been in a situation where someone’s body odor was a problem in an FX.  It’s about the size of a van, so it would be horrendous if someone stinky got onboard.

I do think they should put up signs like this in Singapore though.  There’s a campaign for everything else, so why not a ‘No Foul Body Odor’ campaign?

I saw this posted and it was so funny that I had to laugh. This is great advertising and is sure to catch the eye. I thought it was a missing child report when I first saw it.

I left the number visible because the person who posted this deserves the added exposure for being so creative!

Hey, I didn’t make this up. That’s a street in my wife’s old neighborhood in the Philippines.

It’s actually not that bad!

Ya, that old joke.  I couldn’t resist it, seeing as how the much more tame “cumin” spelling is what I’m accustomed to seeing in the US.