I’m one of those people that’s terribly unlucky when it comes to games of chance like the lotto or drawings for giveaways.  So, I was really skeptical, but hopeful, when an Archway rep responded to my earlier post about Archway cookies.  I mean, you never know who you’re talking to on the Internet right?  I was sort of thinking it might be a scam.  The PR rep said she was delighted to hear about my love for Archway cookies and offered to send me some. 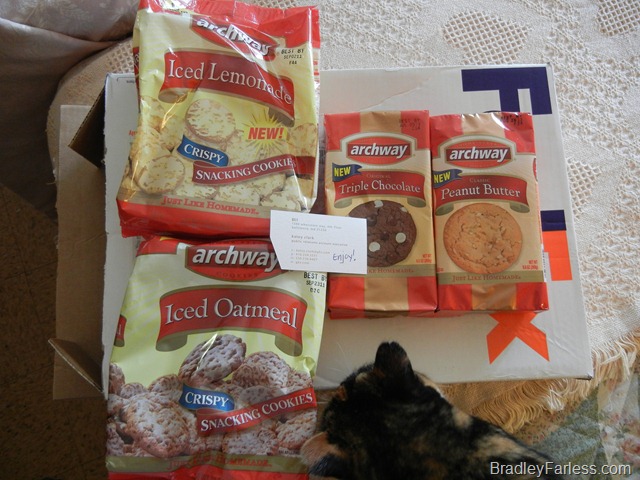 Within a few days of responding to her email, not one, but four packages of cookies arrived in a Fed-Ex box.  Three of them are new flavors, and I’m very much looking forward to cracking them open and trying them (still eating through the ones I bought before!).  After oatmeal, peanut butter cookies are probably my second favorite, and there was a package of them in the box.  If Archway made them as good as the oatmeal cookies, they should be awesome!

Thanks again Archway!  You’ll always have a place in my cookie jar.

On Friday, I came across packages of Archway cookies in the A&P on 14th street.  I’d heard they were out of business and had given up on ever having my favorite oatmeal cookies again, so I was really excited to see them up for sale.  I was so excited that I wrote a blog post about it that happened to get the attention of one of the people in their PR department:

My name is Katey Clark and I work for the PR agency of record for Archway cookies. I found your blog entry from last week and just wanted to write to say hello!

Archway has been back on store shelves since December 2009, and just last month came out with three new varieties, Shortbread, Triple Chocolate and Peanut Butter. After a vote on Facebook last week, it was almost determined that our Rocky Road cookie would come back for a limited time in 2012! (Frosty Orange was a very close second place, so we hope to bring that back for a limited time as well).

We’d love to send you a few trays of cookies to try out! Find us on Facebook at: www.facebook.com/archwaycookies.

Have a good rest of your weekend!

I obviously took them up on their offer of free cookies.  Who wouldn’t?  I didn’t specify any flavor in particular, so it’ll be a surprise.  It’s really neat to see Archway taking an active interest in user feedback via blogs and rewarding that feedback with gifts of the cookies that Archway fans love.

I’ll update again when they arrive! =)

I’m not sure if I’ve ever posted photos of Mini Marble here but she was picked up tonight to be taken for spaying.

You see, Mini Marble is a stray cat, a community cat, here in Pasir Ris. She’s a small kitten of about 7 months and we see her every day as we walk from the MRT station back to our place.

We first noticed her a few weeks ago and she won us over with her playful attitude. She also helped us to make some new friends. So, we carry a small amount of kibble with us to give to her to make sure she stays fed.

Mini Marble’s sterilization will be paid for through donations. It’s dangerous for unsterilized cats to wander around housing estates in Singapore. When they go into heat they may become noisy which often provoked uncompassionate residents into filing complaints. I say uncompassionate because the resulting ‘solution’ is that the cat or cats are often rounded up and sent of to be killed.

So, this is a good thig for her. It’ll help keep her out of the crosshairs of idiots and overzealous estate managers.

She’ll be laid up at the vet for a week and she’ll then be taken back to her usual territory. Hopefully everything goes well for her.

Posted via web from Bradley’s Posterous

I saw this set up at Bossini a few days ago in some mall or another.  I don’t remember where.  At first I was like, hey that’s pretty neat.  I looked at the shirts and I was even thinking it was pretty cool.  Then I realized that it was a move to pull in suckers.

I understand the desire people have to wear branded clothes, and that’s cool.  I don’t mind having Levi’s on my shirt, or Esprit, or whatever.  If you’re paying top dollar for a branded item, why not let people know it?

Where this effort by Bossini goes wrong is that the logos aren’t the Bossini logo. It’s Campbell’s.  So, if you wear this shirt you’re not really showing that you’re wearing Bossini.  You’re endorsing Campbell’s soup.

If you buy one of these shirts, you’re paying good money to be a walking advertisement for a soup company.  You’re not sporting a label.  You’re sporting an ad.  On top of that, I doubt Bossini is illegally using the Campbell’s trademarked logos, so this has to be a deal, meaning that Bossini probably got paid to market the shirts already.  On top of that you’re paying to wear them.

In the end you’re being made to look like a fool to have the opportunity to advertise for a soup company.  Oh, and Bossini makes lots of money.