Yesterday, two buildings exploded in East Harlem because of a buildup of natural gas. I’m sure everyone is going to be trying their hardest to shift the blame onto someone else. Whoever winds up on the receiving end of that lawsuit is going to have a really bad day.

I feel bad for the families and friends of those who died and were badly injured in that explosion. I hope it doesn’t happen again, but I heard on NPR that the gas main by the building was installed in the 1880s and that’s not unique or unusual for this city. It’s like we’re sitting on a bomb that could go off at any moment as the infrastructure ages and fails.

When I was leaving City College yesterday evening, I saw smoke and fire coming out of an access hole in the road. The area was cordoned off with yellow tape and there were dozens of firemen and two trucks nearby.

I stopped to watch for a while and took a short video. I can’t help but think it is somehow related to the buildings exploding across town, though I could be wrong. But, if those buildings exploded and burned then maybe the gas in the line caught fire also? The woman standing next to me was telling me that the lights in the school building there, P.S. 192, were flickering, so this fire was damaging the power lines as well.

Everything looked normal when I walked by today, though. I just hope the city does something to address the issue of aging gas pipes and starts taking complaints about smelling gas more seriously after this.

This morning I accompanied my mom to Times Square Church.  We left late, but hey, that’s what happens when you stay up til 2 AM.  Anyhow, we went out the door at about 10 AM and when we got to 14th street, where we usually catch the bus to Union Square for the train, the road was shut down between Avenues A and B. 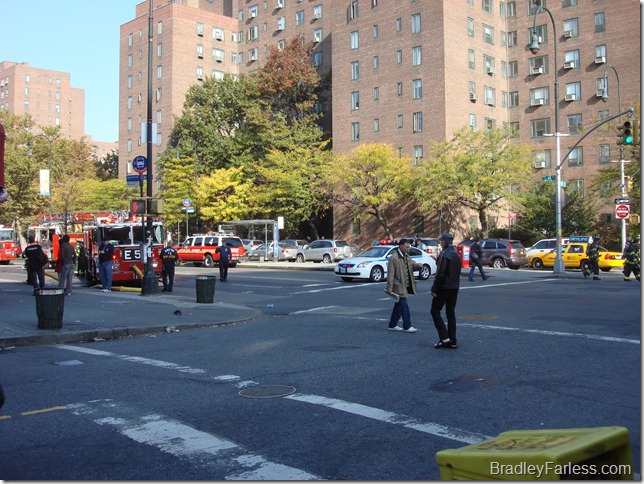 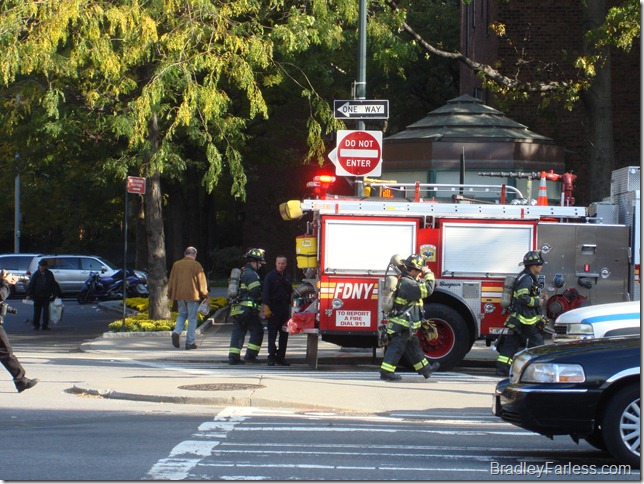 This may seem like a stupid question until you see the following photos, but I asked one of the firefighters why they were there.  He said there was a fire in the building that one of the trucks’ ladders was up against.  You see, I thought something serious was happening, like a gas leak, a bomb threat, or something that could potentially destroy us all.  The whole street was filled with response vehicles: 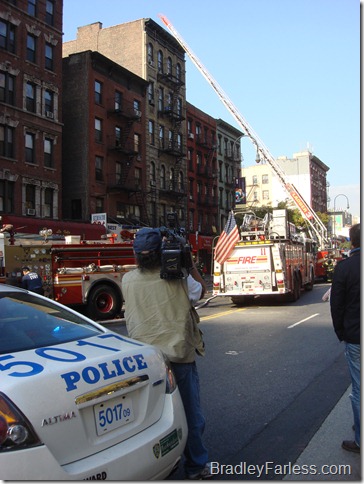 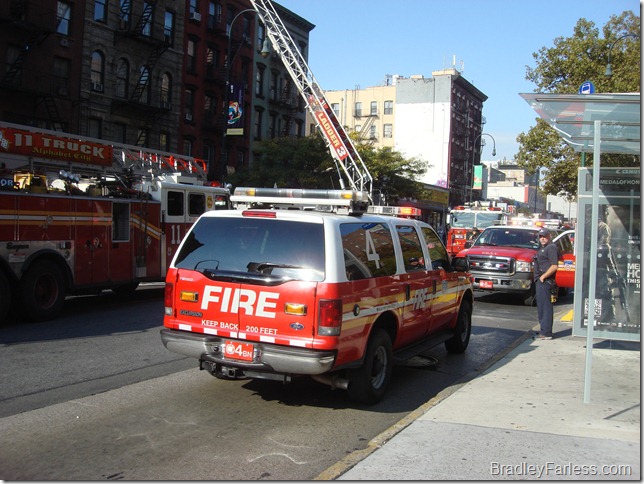 To the right of the SUV marked “4” is the bus stop we usually use, and the guy standing there is the one who I asked what was going on. 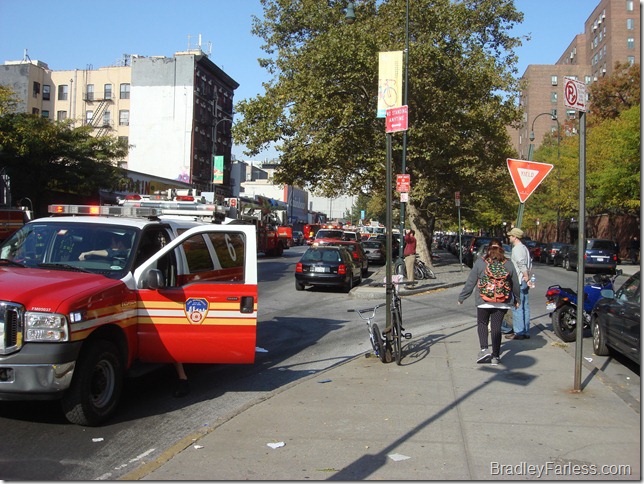 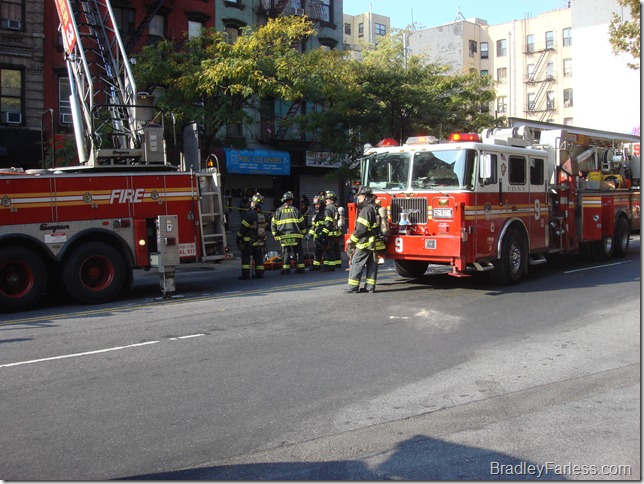 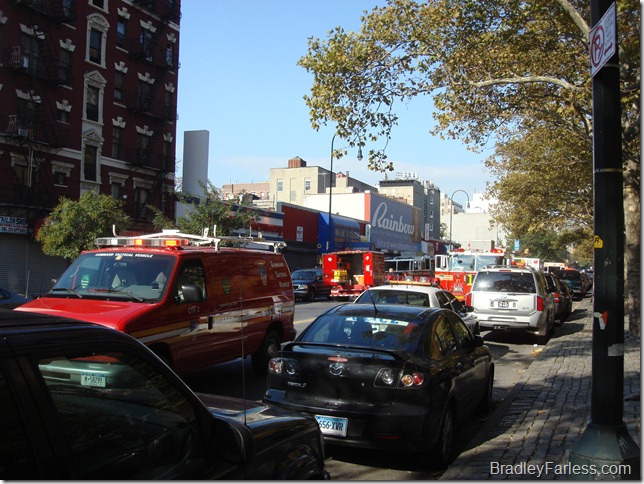 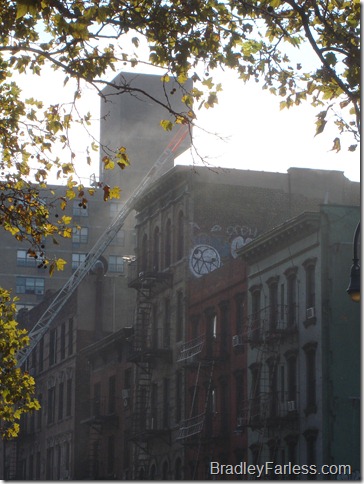 When we first walked by, we couldn’t even tell that the building was burning.  By the time we got to the Avenue A intersection, there was some light smoke rising from the building.

I didn’t see anything about this on the news this evening, but there was a guy recording with a professional camera.  I can’t help but wonder what was going on in that building that required so large a response from emergency services.  Was it overkill, or were they just making sure they brought enough firepower to put down anything they encountered?  I have no idea how things work here in NYC in regards to emergency response since the September 11th, 2001 attack on the World Trade Center, but even my mom seemed surprised and she’s been living here for a long time.

Regardless, it made for an interesting start to the morning, got my blood pumping and helped me from falling asleep in the warm, cozy Times Square Church annex during the sermon, which was actually pretty good.

Oh, and after the service… I enjoyed an unexpectedly 8 dollar kebab wrapped in pita bread.  I think I’d have been better off waiting til I got back downtown to the famous stand on 6th avenue.  I can’t remember the name of it, but I’ll blog about it later.  Lesson learned.  Food prices at the Times Square street fair are steep! 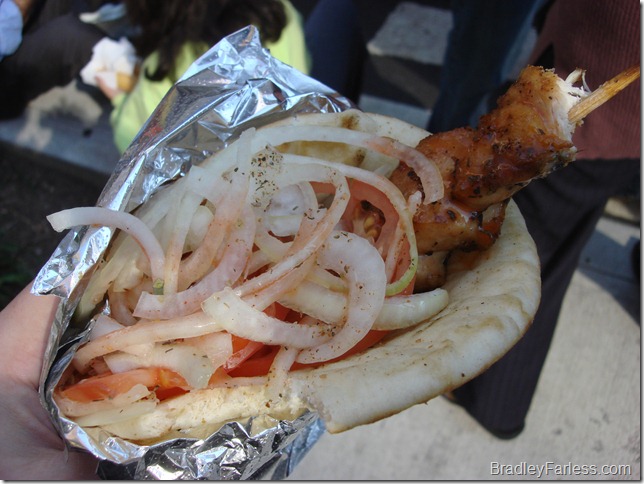 The trash pick-up here is only once a week, but with the amount of crap I’m hauling out, in addition to regular daily household wastes, I had to get creative.  That’s why burning it is the best option.  It also prevents animals and scraggly children from tearing open the bags to see what’s inside and leaving a pile of trash in front of your house that has to be bagged up again.

The lot next door is unoccupied, so it’s front ‘lawn’ makes a great place to build a fire.  Here’s the fire pit as it stands now: 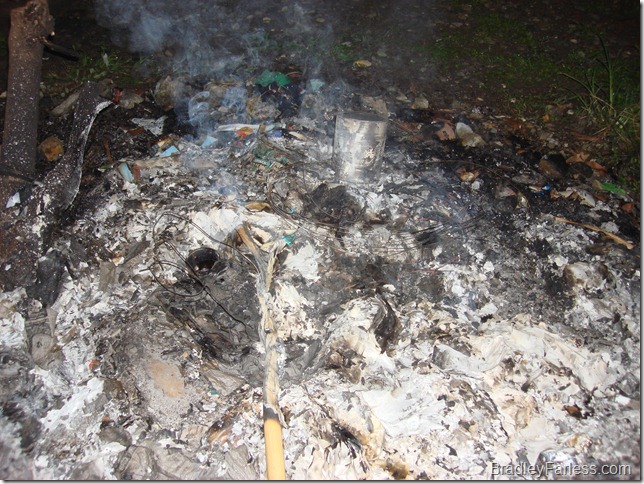 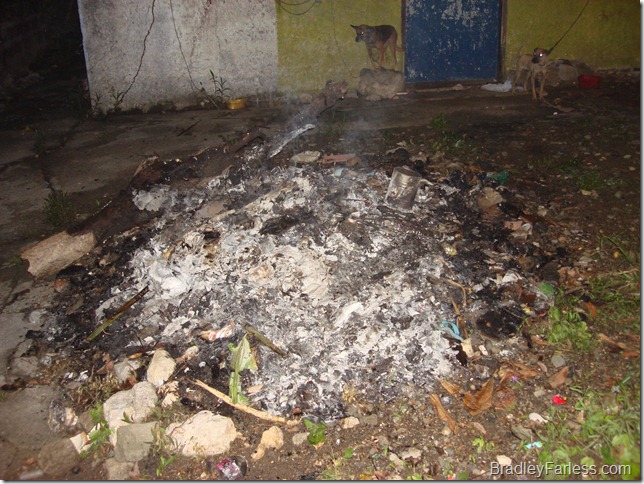 It’s a bit messy.  I have to get out there with a rake and a shovel to dispose of the remains but I haven’t had time to yet.

It feels great to get rid of all of that crap.  The house is gradually getting cleaner and livable.  It’s a big place and it’s a waste if it stays the way it is, not to mention it’s unhealthy for everyone that lives here, so I’m staying motivated to get the job done.

Tomorrow I think I’ll finally finish cleaning out the back of the house.  We bought a washing machine 11 days ago but haven’t been able to install it because there was too much scrap wood and metal in the way.  It’s a good thing too, because I’m almost out of clean underwear.