Yesterday, I was coming back into the city from New Jersey on the PATH train and got off at 14th street.  My plan was to hop on the bus and then go back into the subway at Union Square to head uptown to the Metropolitan Museum of Art.  I wound up having to get back off the bus and walk, though, because punks don’t know how to behave in public.  One kid jumped another kid and the result was a big traffic disaster on 14th street between 6th and 5th avenues. 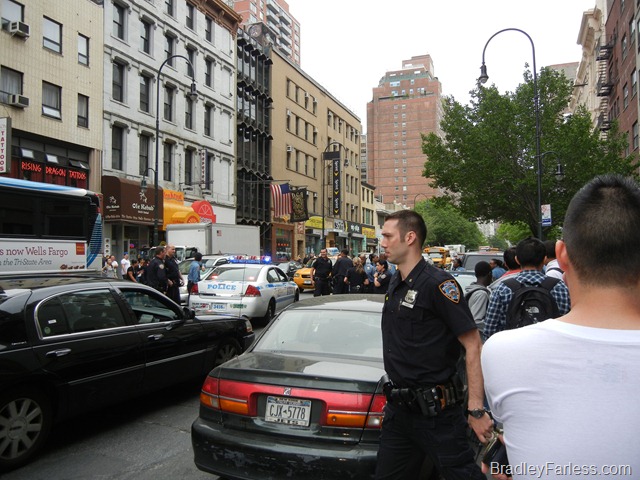 As soon as I got seated on the bus I started seeing flashing lights and the bus just sat there, so I took a look out the window and saw that the street was jammed with police cars.  There was a tour bus going the opposite way, but stopped in the road with all the tourists on the open upper deck leaning over the rail and gawking.  I saw a black guy being led away in cuffs.  I waited a while and then got off the bus to take a few pictures and then walk to Union Square. 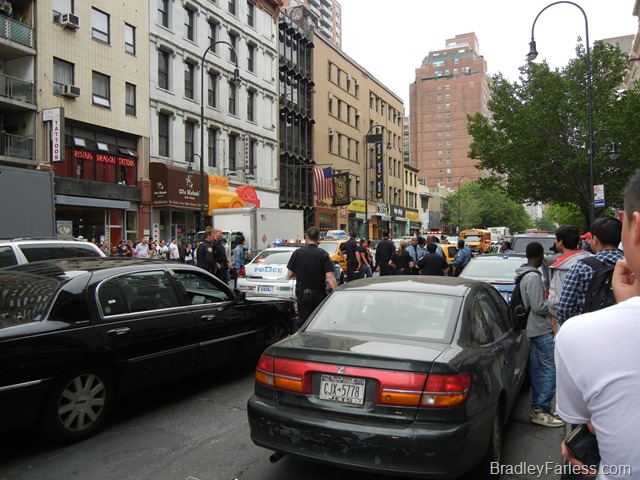 While I was standing there taking photos, I heard what happened from a woman that had been handing out sales fliers.  Apparently, a bunch of kids from a nearby school had just left class and one kid jumped on another kid and busted the side of his face up.  The kid that got attacked took off into the subway station I had just left. The guy I saw being handcuffed was the one that did the attacking.  While she was telling me this, the police were yelling at the crowd of kids, which I assume were classmates of the kids that were fighting, telling them to go home or at least leave the area. 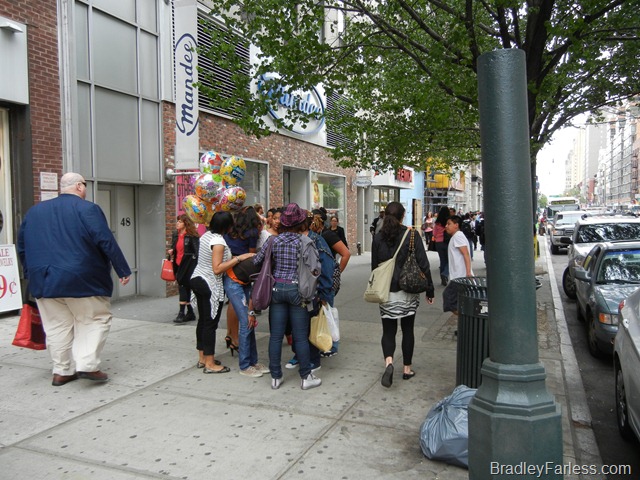 When I was walking away, a girl (brown coat in the above picture, surrounded by friends) started crying, saying it was “[her] man’s birthday.”  I can only assume that the guy that got arrested is, or was, her “man”, and they weren’t going to be doing much partying that night.  He must not have wanted to celebrate his birthday anyway or he wouldn’t have done something illegal in the middle of a crowded street.  People just don’t think anymore, do they? 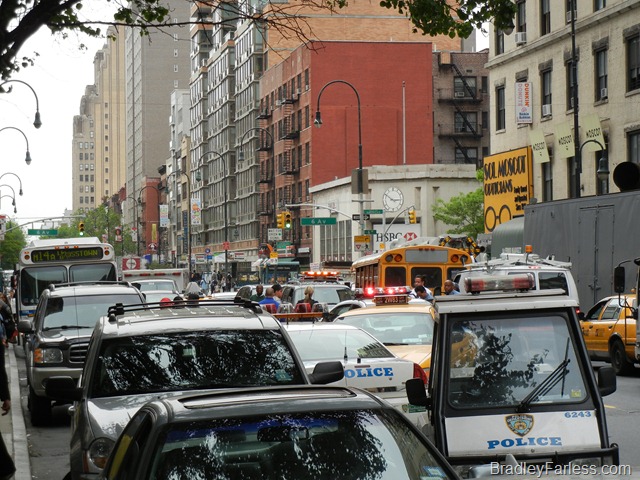 On the left, you can see the M14A Crosstown I got on, then got off, stuck on the side of the road because of all the police vehicles. 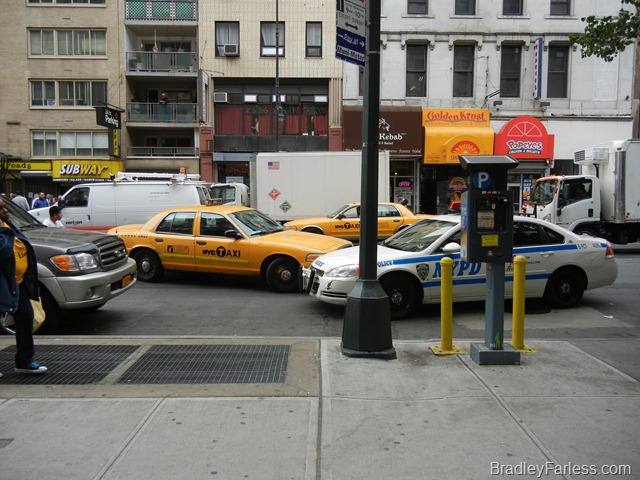 The only redeeming factor in this whole fiasco, besides giving me something to blog about, is that I got to see an undercover NYC police car that looks like a taxi cab.  In the photo above, the foremost taxi (facing right, just behind the cop car) is an undercover vehicle.  You can see the red strobe light in the center of the dashboard.

My wife and I were in Downtown East tonight when we noticed this trail of blood leading past the entrance to Sakura.  At first, I thought that perhaps some poor girl was having an unfortunate night, but then I realized it was way too much blood for that.  The trail led to the door going out of the mall.  In the other direction, it headed down the stairs into the lower level of the mall.

As I started taking pictures, three police officers walked by, following the blood trail out the door.  I went the other way, following it further into the mall.

This is the handrail on the steps that go down from the entrance of Sakura into the mall.  You can see blood splashed on the wall and on the metal railing.

This is the post on the wall by the ATMs, just past the Indian restaurant towards the sliding glass door where the long escalators are that go to the 2nd level of E-Hub.

These are pictures of the stairs that lead up to the 2nd floor of E-Hub, between the escalators.

At this point I ran into a guy that was wearing a mall uniform who was taking pictures of the blood trail. I asked him what had happened.  He said there was an incident outside the mall.  He also kept saying “8 plus” “8 plus”.  I couldn’t quite understand him, but what I’m thinking is that 8 kids attacked a 9th kid, who fled into the mall for safety after sustaining heavy wounds.  The photos only tell a bit of the story.  There was a LOT of blood on the ground and walls the whole way along.  I wonder, can this much blood come from a broken nose, or is it a knife wound?

These three photos are from the landing at the top of the escalators, where you enter the E-Hub mall.

This is inside, in the “alley” area where the walkway skirts the children’s playground.

This is right in front of the virtual reality arcade game that sits under the escalator that goes to the movie house and arcade on the third floor.

This was the last bit of blood we saw.  I wonder if this was another incident of gang violence, like the gang fight masked as a lion dance reported in the news, or if it was “schoolyard” bullying taken to an extreme.