Seriously.  I feel like I’m trying to enter another country when I’m riding the new, supposedly improved SBS service.  If you’re not familiar with these SBS service buses, they’re supposedly a great new way to get around town that will be faster than a normal limited bus.  They also supposedly save the city money.  I’ve said it before, but I’ll say it again, that’s just bullshit.

These buses use their own, special bus stops.  In addition to these new bus stops needing to be built, new machines had to be installed outside, adjacent to these bus stops.  You see, even though these new buses are equipped with MetroCard readers, they want you to buy a ‘ticket’ before getting on the bus.  That means the city spent extra money on these ‘ticket’ machines as well.  It’s not really a ticket.  You just get a receipt showing your MetroCard has been debited for the fare required to ride the bus.  By the way, that’s more dead trees.  Was that really necessary?  How is it saving money to have to supply all of these ‘ticket’ machines with paper?  Shouldn’t we be moving towards being a paperless society, rather than finding new ways to deforest and kill our planet?  Not that I’m an eco-nut, but this just seems like a blatant waste of resources and money, which doesn’t make sense when everyone is screaming about budget cuts.  I wonder how many people’s jobs got cut so MTA could afford to print thousands, or tens of thousands, of paper tickets every day?

Now, in addition to the complete waste of resources these ticket machines cause, and the fact that instead of lining up to get on the bus you instead line up to get a ticket, there’s an additional problem.  This system creates another opportunity for you to be hassled by the man.  Today, I rode one of these SBS buses from 14th street up to 116th street and the bus was stopped twice and left idling while cops searched everyone on the bus for ‘tickets’.  Idling.  Isn’t that what the new system was supposed to prevent?

Why do they have to do this?  Well, the answer is easy.  They’re relying on a trust system, that people will pay before boarding, but … seriously?  Do they really think this is going to work?  What world are they living in?  Even on a bus system where people only board at the front, there are people who slip on and try to ride for free, and often pull it off.  If you set things up so that people can board at any door and you’re just supposed to trust that they have a ticket, there will always be people trying to sneak on.  People were pulled off and ticketed both times our bus was searched, and unless teams of police are set up to stop these buses and search them randomly, all day every day, it will continue.  These searches slow down the bus and they’re really not any faster than the regular limited buses they replaced in the first place.

You know what?  There’s an easier system than this, and it’s one I learned in Singapore.  For a first world country, we sure are doing things real stupid over here in the US.  We need to model our transit system off of Singapore’s.  Instead of having these flimsy, crap cards we use for our buses and trains, they have cards with chips in them that can be read like the Visa PayWave cards.  You don’t even have to take them out of your wallet or purse.  You just slide them over a scanner as you enter and exit the bus or train station.  That would save time.  Not having paper tickets would save time.  Not requiring the bus to be stopped and all the passengers to be checked like Nazis searching for Jews would be faster.

And, if you’re going to have cops constantly searching people on the bus, do it smart, not stupid.  I mean, really, you want to stop the whole bus and have us sitting there while everyone is checked for tickets?  Here’s a better idea.  Have cops get on the bus, have the doors close and the bus continue on its route while the cops check tickets.  Have the cops get off at the next stop and either get on the following bus, or cross the street and go back the way they came on the next bus.  That would allow them to continue writing tickets and providing the city government with this new revenue stream (because that’s what this is all about), and it wouldn’t increase people’s commute times.  And hey, since I mentioned Singapore’s system earlier, here’s another spot where it could come in handy.  They have people that randomly get on and ride with the bus.  These people carry handheld card readers that can read your card and show when you last scanned it.  Oh, and they don’t stop the whole bus while they do it.  That’s pretty easy, and it’s smart.  I wonder why they didn’t think of it?

This whole thing with the tickets was done to supposedly save money on the fuel the buses use while idling at bus stops, and to make things faster and more convenient for riders.  The MTA/SBS built a bunch of new bus stops, built new ‘ticket’ machines, are printing paper tickets that aren’t free to produce, and then have the buses idle for police checks, but somehow this is cheaper and faster than just running a normal limited bus.  I totally see the logic here. 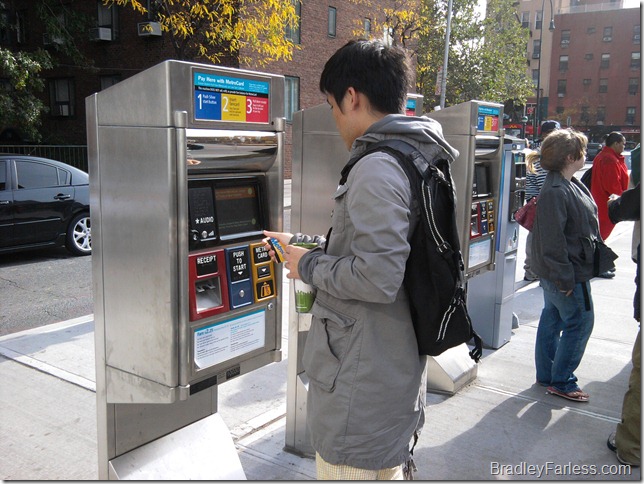 The M15 limited bus is one of the new SBS buses in New York City.  It uses a new system where you buy a ticket from one of the machines pictured above before you board the bus and then you can enter the bus from any of the doors, rather than just the front door where the driver is.  It’s also supposed to have a dedicated bus lane and, though I have no clue how this works, priority at traffic lights.

The problem I see with this is that it doesn’t really save time at all and it wasn’t advertised enough.  I’ve only been back in the city for a little while, so it’s really no surprise that I hadn’t heard of this before having to figure it out firsthand, but other commuters seemed just as confused by the thing as I did, including my mother, who was born here and, after some time away, moved back 17 years ago.  She watches the news regularly but had never heard of this change and it wound up causing an incident on the bus we took this afternoon, the M15 at 1st Avenue and 14th Street.

You see, we showed up at the bus stop and boarded the bus just like any other bus.  The driver sat there and watched us come in through the front door.  He watched my mom dip her MetroCard into the machine and saw that it deducted the transit fare.  Then as she started to walk away, he called her back and told her she needed a ticket from one of the machines outside.  After she had already paid.  To get a ticket from the machine she would have to pay again.  We wound up having to get off the bus.

My question is this: why did the driver watch my mother dip her card and deduct a fare when he knew that wasn’t the appropriate method for boarding the bus?  Why is the card reader even on the bus in the first place if it’s not used for these limited buses?  And what recourse does my mother have now to recover the money taken from her?  None.

The driver gave my mom one of those paper transfer cards and told her to try that in the ticket machine, but it didn’t work, and of course he drove off right away rather than having to continue dealing with the problem.  Not that he could wait around forever of course, with a bus full of passengers, but it still feels like he was trying to evade the problem.

So, in the end, my mom got shorted one fare today.  One fare may not sound like much to some people, but every dollar counts and it’s not just the amount, it’s the principle.  The NYC MTA stole money from my mother today.  That’s bullshit.

Getting back to what I was saying about the process not being any faster, like SBS claims, I believe that it’s all a trick to make things seem faster.  The only faster part about it is getting on the bus.  It still takes just as long for people to get off the bus.  It also takes quite a while to get a ticket.  I haven’t been there during the morning rush hour but we spoke to one lady who said that in the morning there are long lines of people waiting to use the machine to get a ticket, and while you’re standing there in line waiting, you’re missing buses that go by.  So, how is it really making it faster for passengers to start at point A and reach point B?  I also don’t recall the bus using any special lane on 1st avenue, or having some sort of special privilege at the traffic lights.

This whole system just makes things more confusing than they have to be, and it feels like a step backward rather than a step forward.  Seriously MTA, paper tickets?  You know that’s what they do in third world countries, right?  Everyone else in the world is moving towards a permanent prepaid card that you use indefinitely.  You don’t even scan, slide or dip it.  You simply tap it on a panel that reads the chip in the card to do the fare deduction.  You don’t even have to take it out of your wallet.  That’s easy and faster.  Imagine getting on the bus and dragging your purse over a pad to make your payment, or bumping your wallet against a pad before tucking it back into your pocket.  No more fumbling with getting a card in and out of your purse/wallet/pocket.  And you know how the secret inspectors verify that you’ve paid?  They have a handheld device that reads passengers’ cards to show when they last used them and for what bus.  They don’t walk around asking for paper tickets.

One last thing I’d like to mention is the extra costs involved in this venture.  The SBS signs on the buses point out how they use less energy because the buses are at the stops for a shorter amount of time.  That’s all well and good, but what about the cost of all of the ticket machines?  And how is it greener to print paper tickets for every single person for every single ride!!!!!!????  One of the simplest concepts in ‘going green’ is to reduce the use of paper to save forests, not increase it unnecessarily.

The money that’s been wasted on this project should have been used to replace buses with newer, more fuel efficient models, or to upgrade the system to permanent, prepaid tap cards.  As far as this goes, though, it’s a step towards the third world in a city that’s supposed to be the best.