I haven’t talked much about my personal life on this blog, but just for the sake of making this more understandable, I recently moved to the Philippines and am staying at my in-law’s house until my wife and I find work in Manila.  At some time or another, most of the members of her family have lived in this house, so there are of course leftovers.  I don’t mean food leftovers.  I mean the things that get left behind, things that they say they’ll come back for later, but sort of never do.  We’ve been sorting through things and temporarily appropriating what’s usable.  One of the things we were able to find was a curtain which happened to have a big Doraemon scene on it. 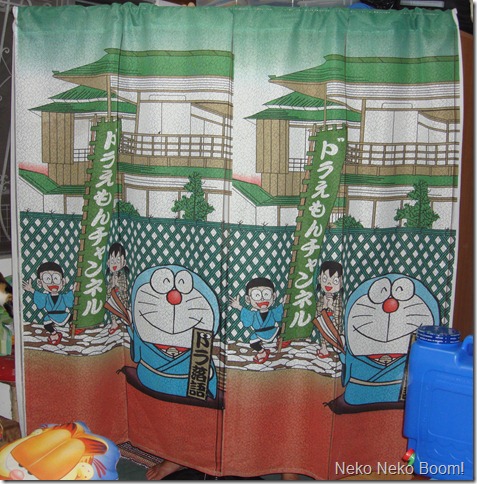 I’m not a Doraemon fan.  I’ve never even seen the show.  I’m pretty sure this curtain belong’s to my brother-in-law who has two small kids, but it does sort of suit my interests.  I figured, why not hang it on our bedroom window so that when I see it I’ll be inspired to study Japanese?

Also, on a side note, my wife is interested in anime almost as much as I am.  Right now she’s hooked on watching Jigoku Shoujo with me.  Cool, right?  So, she was more excited than I was to put it on the curtain rod and “liven up” the room a bit.