The office building I work in is at Bowling Green. According to the New York City Parks website, “Bowling Green is New York City’s oldest park. According to tradition, this spot served as the council ground for Native American tribes and was the site of the legendary sale of Manhattan to Peter Minuit in 1626.” So, the area is a popular tourist attraction. The Smithsonian’s Native American museum also faces this park.

The most popular attraction in the park seems to be the Charging Bull rather than the museum. Every day there are people crowding around this bronze statue to have their pictures taken with both its face and its balls. The balls seem to be more popular. I suppose that’s not surprising. The bull is supposed to represent the power and unpredictability of market forces and represents Wall Street and the Financial District.

This week I spotted a new arrival: a Christmas themed Winnie the Pooh and accompanying muscle, presumably to strong-arm tourists into giving up money after taking a photo with the costumed person. This is a pretty common thing in the Times Square area and became a point of public conversation during the debate over topless women posing for photos in Times Square in exchange for cash. I’d never seen them in the Bowling Green area, though, and after that one time I never saw them again. I wonder if they were driven out by the police, by crowds of tourists telling them to get out of the way so they could take photos with the Bull, or by the police, or some combination of those three?

Regardless, I’m glad to see those two assholes gone. The crowds of tourists around the office building can be aggravating, because they obviously aren’t in a hurry during my lunch break and they sometimes block the sidewalk, but it’s understandable and I can’t be mad at them for coming to this city and having a good time. These people that dress in costumes and strong-arm people into taking photos with them and giving them cash afterwards, though? They’re parasites and they’re disgusting. It’s better than outright robbery, but not by much. I hope they stay gone. 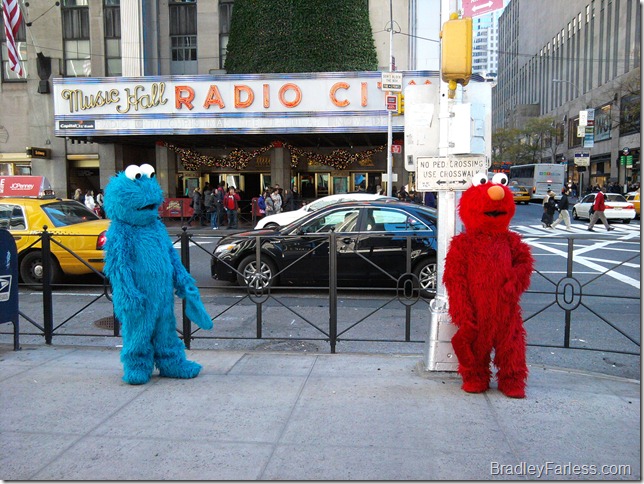 I don’t remember ever liking Sesame Street when I was growing up.  Maybe I did and I just don’t remember anymore.  Regardless, Elmo and Cookie Monster are still in hot demand, despite Sesame Street being 41 years old.  That’s right!  It originally debuted on November 10th, 1969.  So, some of these cute fuzzy guys are older than a lot of people’s parents are now.  That’s something interesting to consider while watching the show.

Sesame Street is popular all over the world.  My wife told me that when she was growing up, Sesame Street was how she first started to learn English.  So, I guess I have to say thanks to Sesame Street for that, at least.  When I showed the above picture to her, she showed me a photo she took in Singapore a few years ago, with Cookie Monster and Elmo hanging out at an N.Y.D.C. Café & Restaurant: 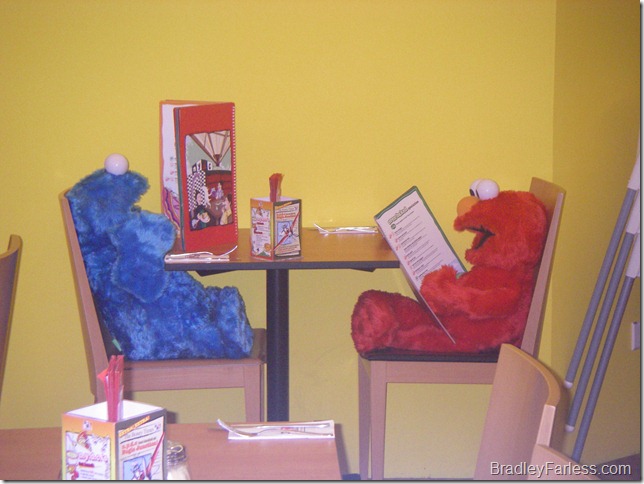 And it seems that Elmo has a special friend in the Philippines as well: 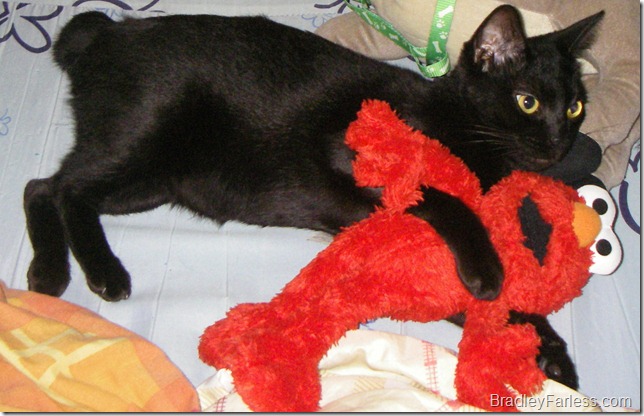 That photo wasn’t staged.  Thumper likes to hug Elmo while she lounges on the bed and sleeps next to him sometimes.

They sure do get around don’t they? 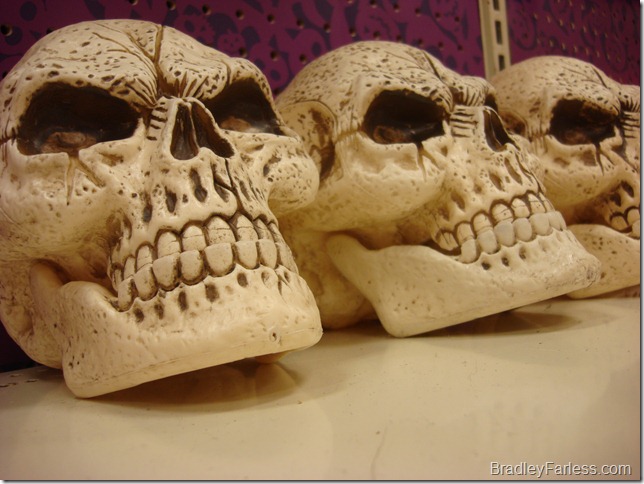 I hope everyone had a Happy Halloween!  I spent my evening out on 6th avenue watching the annual Halloween Parade, which is said to be the largest Halloween event in the country.  I’ve gone to see it once before, in 2007 when I was here in the city on leave from Kuwait to visit family. 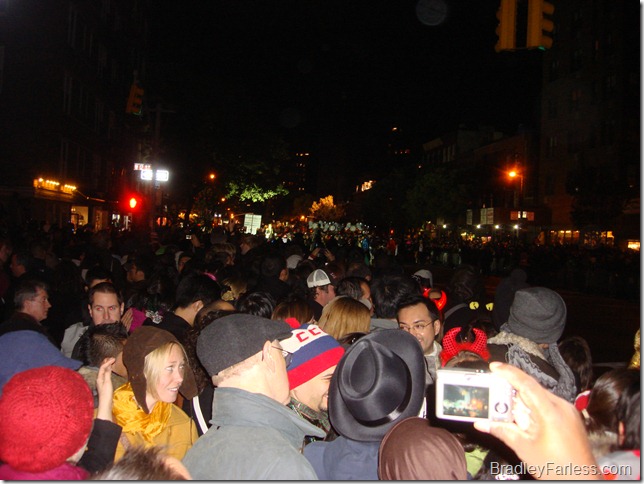 It was pretty chilly out there, really crowded and it smelled funny.  Maybe it was just the area I was standing in, but I heard a few other people complaining about the smell as well.  There wasn’t much I could do about it.  I showed up an hour early and still was standing behind 3 rows of people.  I figured if I moved I might not get a spot as good as that anywhere else, so I just put up with it.  I didn’t hang around for the whole thing.  After the better groups of parade participants walked by, I figured I’d beat the rush of the crowd.  Getting jammed around by a crowd of mostly drunk people isn’t my idea of a good time.

I was hoping I’d get some better pictures this year, but most of them still turned out poorly.  I’ll share the better ones though: 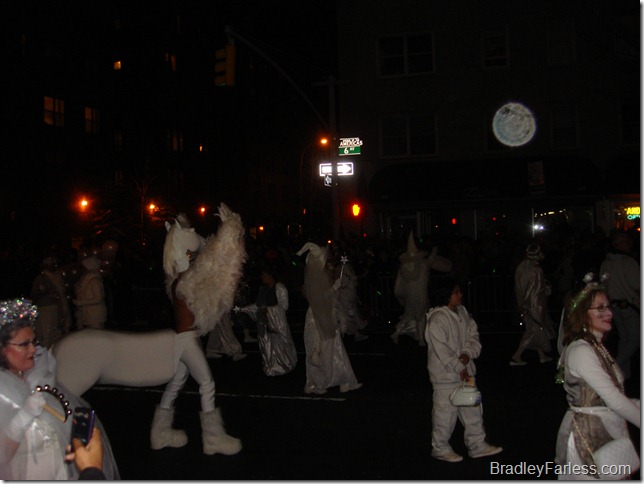 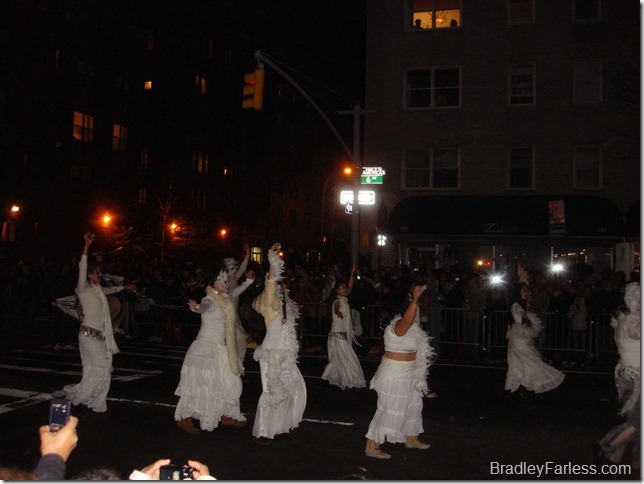 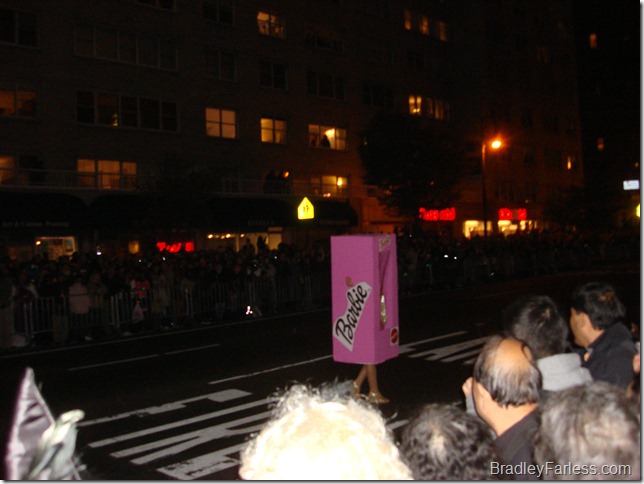 Barbie thought she was special so she was walking by herself. 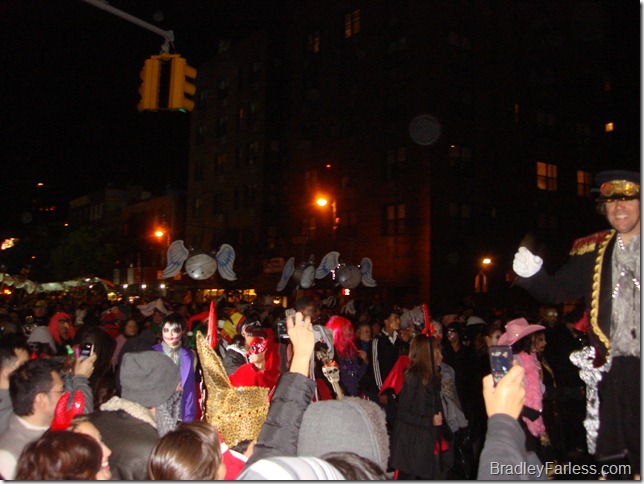 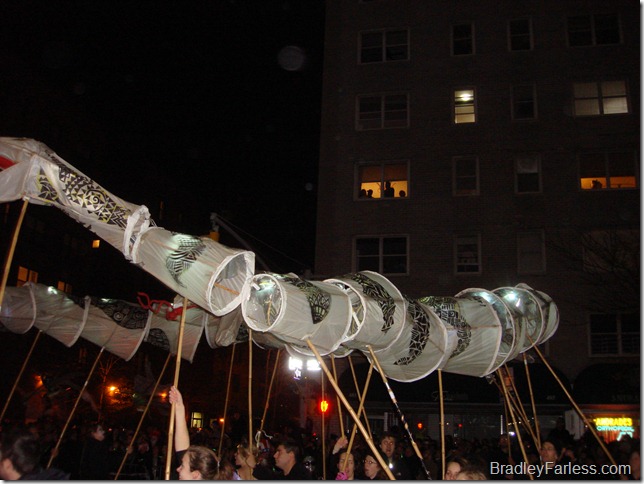 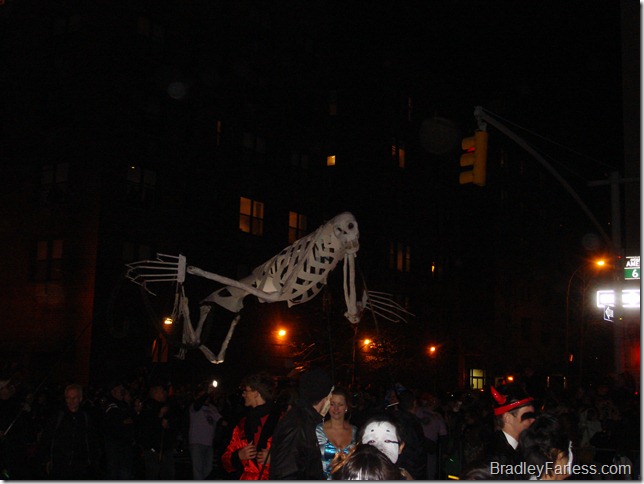 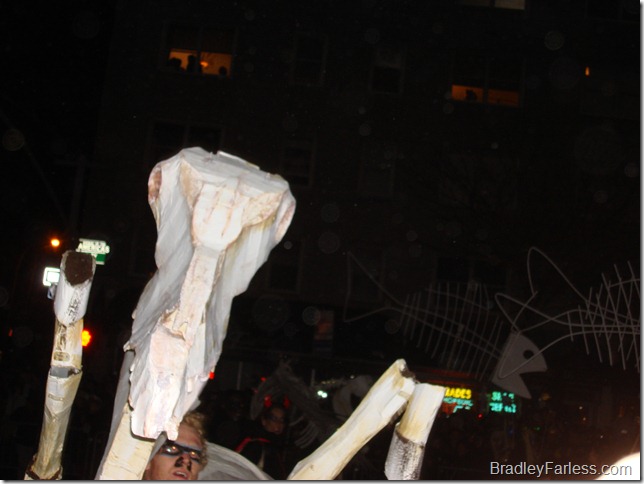 This is the head of a skeleton horse, and it’s front hooves, if you’re wondering, plus some dead fish swimming around in the background. 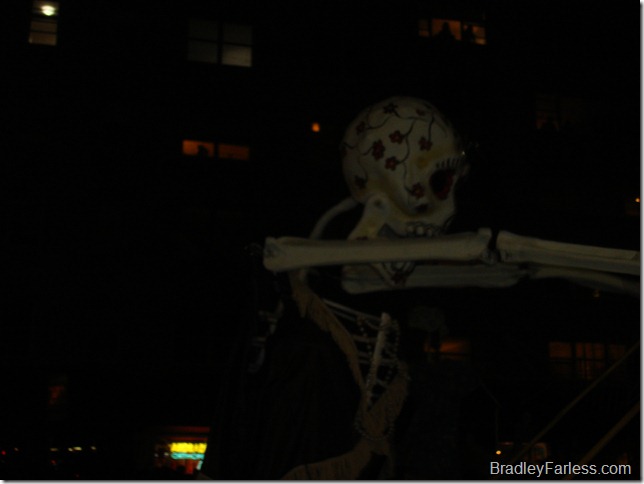 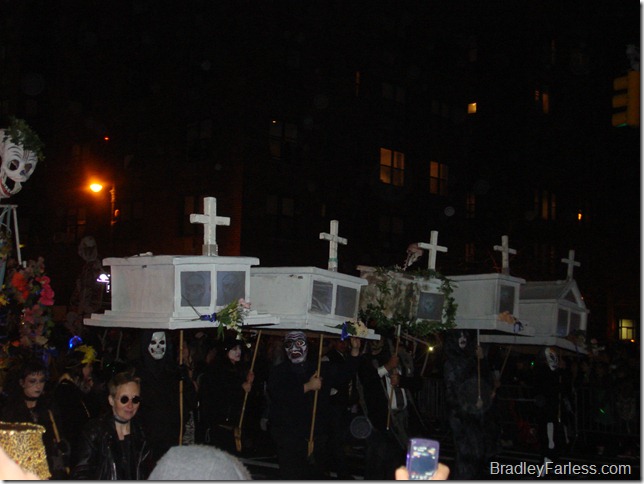 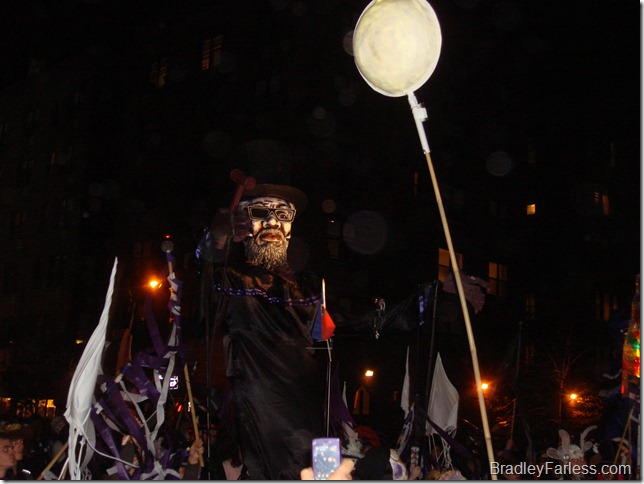 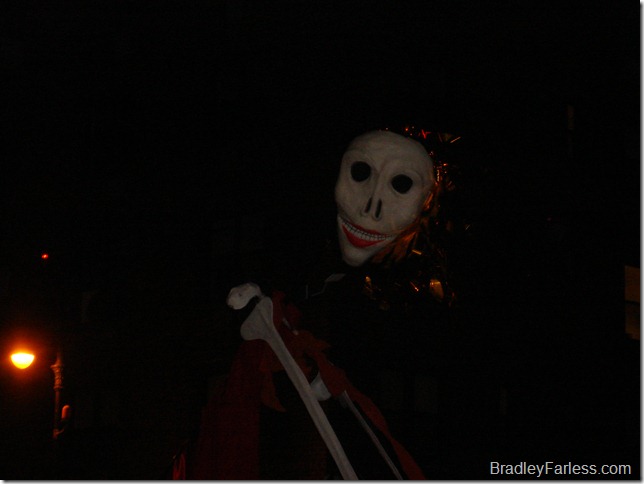 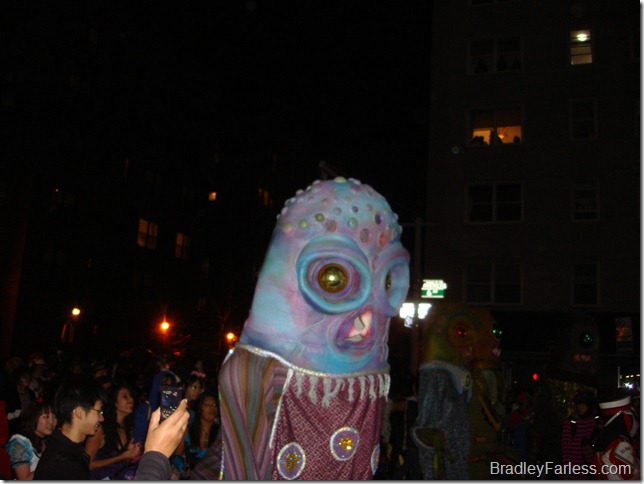 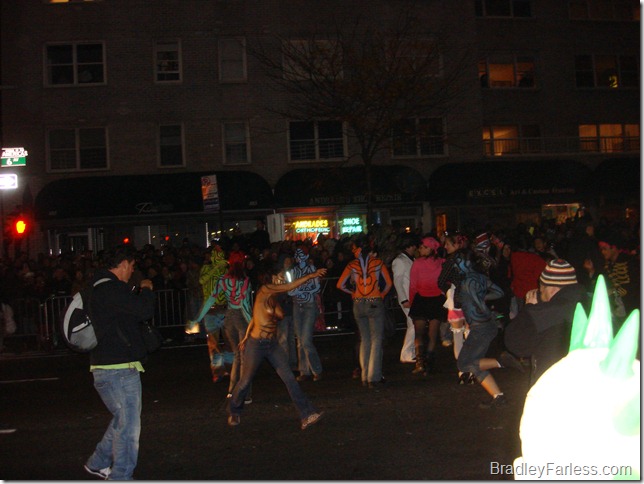 Yes, they are naked and covered in body paint while dancing to the beat of a tribal drum. 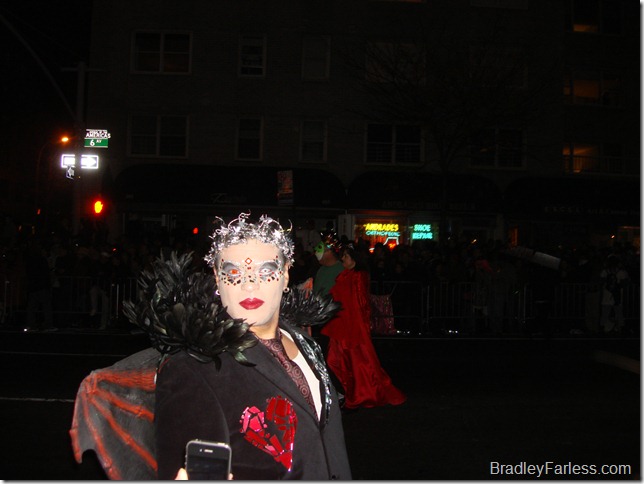 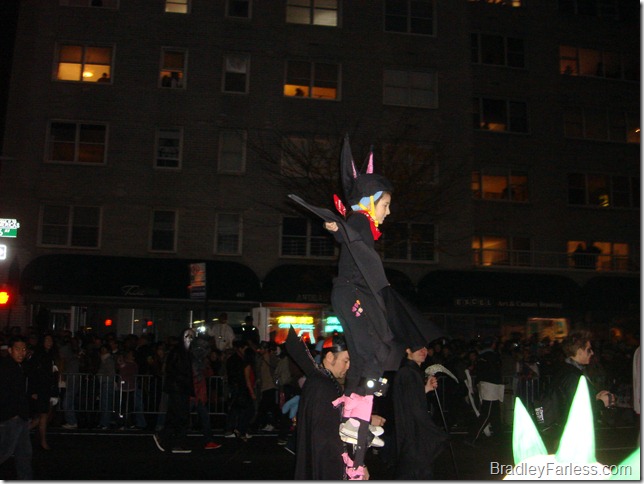 This little girl was walking on stilts all the way down the parade route from Spring Street to 16th Street. 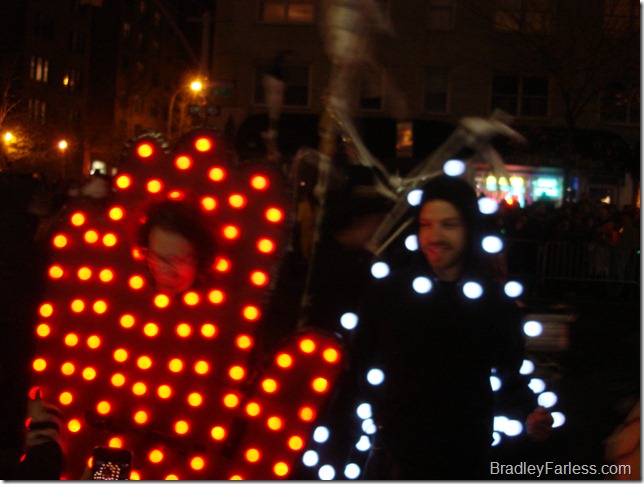 These two guys were dressed as the stop and go signals for pedestrian crossings.

And that’s about it.  By this point I was starting to really feel the cold and my legs were starting to get tired, so I decided to head back home.  I hope you enjoyed the photos, and hopefully I can get some better ones next year!