One of the biggest problems to overcome when you’re in the US and have family and friends in the Philippines is finding a cheap way to stay in touch.  There are a lot of options out there for cheap communication to the Philippines, which I’m still sorting through, but to keep things cheap for the person in the Philippines, there’s an easy option.

When I came back to the US, I brought my prepaid Globe phone with me and set it to International Roaming through their website.  This allows people in the Philippines to send messages and calls to my phone at local rates.  It also allows me to receive those messages at the same local rates, which in Globe’s case is free.  They have no incoming fees.  So, that’s 1 way communication at a cheap rate.

The problem comes in when you reply back and use up your credit, or when the credit expires.  Credit added to Globe prepaid phones is only valid for a certain number of days before it expires.  Either way, you eventually need to add credit to your prepaid number.  As far as I know, there’s no way to do this through Globe’s website.  I’ve read a few board threads here and there where people suggest buying Globe reload cards through eBay.  It’s also possible to send money to your relative back home and have them get credit added to your phone there.  The first way is a hassle for you, and the other way is a hassle for your relative.  There is one other way, though. 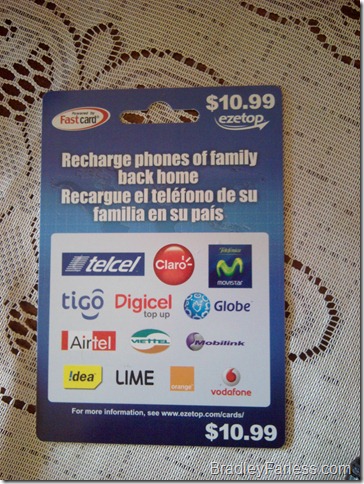 You can buy a 10.99 ezetop reload card, which is powered by Fastcard.  They’re the same people that do most of the online game reload cards and the local US prepaid cards.  I picked up this one in a Rite Aid in New York City.  You scratch off the silver stuff to reveal the PIN, call the 1-800 number, enter your PIN, the phone number you want to load, confirm the mobile operator and that’s it.  Your load hits your phone as an AutoLoadMAX reload.

There’s a catch though.  I went back and read the fine print after receiving confirmation of my credit being added to my phone because I was a little surprised at the actual amount I was credited with.  Let’s do some math.  As of today, 10.99 USD is 473.34 PHP.  How much of that was actually credited to my phone?  300 PHP.  That means I lost 173.34 PHP, or about 4 USD, in the transaction for miscellaneous fees.  That doesn’t sound like much, but when you think about it, that’s almost 1/3 of the cost of the card.

So, what I’ve learned here is that if I’m really hurting for a reload on my Globe phone, I do have an option here in the US.  However, if I’m not in a rush, the hassle I might put my relative in the Philippines through putting credit on my phone is worth it considering the fees involved with this method.

If you’re wondering, these cards work for the Globe, SMART, and Touch Philippines mobile operators.