Something I noticed on my first visit to the Philippines two years ago was that people seem to live anywhere there’s room enough to set up shelter.  I thought that there must be no sort of zoning regulations or building codes, both of which would prevent this sort of thing in the US.  I still don’t know if there are building codes and zoning regulations in the Philippines, but I know why there are houses everywhere.  People just do what they want to do and because so many of them do it, it’s too costly for the government to try to stop it; they just ignore it instead.  This has led to a class of people who are locally called ‘squatters’, at least in English.

Squatters are people who don’t own the land they’re living on.  They have no legal agreement, tenancy or title, or anything of the sort.  They just see an area that looks like a good spot for a house (or in some cases just a ramshackle shelter) and they start building with whatever they have the means to afford or acquire.

What you wind up with, at least in Manila itself, is something that looks like this: 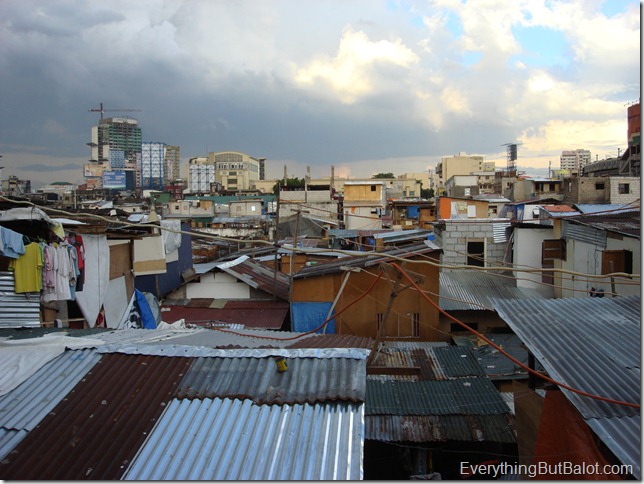 I don’t remember the name of the area where I took this photo.  It’s where two major train lines intersect and you pass between them using a covered walkway.  One of the protective grills was missing so it gave me the perfect spot to take a photo.  The squatters homes are made of pretty much anything they can find and put to use.

The most bizarre thing about squatters is that they have electricity.  Some of them even have air conditioners and they usually have running water too.  In the interests of earning money, the utility companies in Manila have done installations to provide them with their basic needs, further legitimizing their claims to their homes, and the land they sit on.  Imagine being a politician and trying to shut down all of the areas like this in Manila.  Imagine the public outcry over the ‘inhumanity’ of it.  So, despite the fact that these people don’t own the land, it’s not likely they’ll be removed any time soon.