I went up to Target today with my mom to give her a hand with her bags.  On the way back, we got to 14th street just in time to see a bus pull off, so we walked from 2nd Avenue to 1st Avenue, and right as we got there a bus pulled into the stop.  My mom was tired, so we got on the bus and used our transfers.

About halfway between Avenue A and Avenue B, I pressed the strip to light up the ‘Stop Requested’ sign at the front of the bus.  Instead of slowing, the bus driver accelerated.  People yelled at him to stop, but he kept going anyway, right on past the bus stop.  I guess he just didn’t feel like stopping there tonight.

After everyone shouted at the driver to stop, and he ignored us, he got on the bus intercom and told everyone to hold still, because he was going to take our picture. Why was he taking our picture to start with? And why are buses equipped to take still photos of passengers in the first place? Isn’t video enough?  Does a bus driver have the authority to arbitrarily take photos of passengers?  And what systems are in place to prevent abuse?

The next stop was in a dark part of 14th street and would have left us having to cut through a back alley in the projects to get back to where we wanted to be, so we had to stay on the bus until it turned down Avenue D and stopped at 12th street.  That still left us having to cut through the projects, but at least the area was more lighted.  People have been shot and killed in that area fairly regularly over the last few years.

The driver wasn’t done being a jackass, either.  When he pulled into the stop at 12th street, he positioned the rear door so that a pole and a pile of snow were right in front of it.  Besides the fact that I was hauling a heavy cart out of the bus (which caused me to slip and almost fall on that snow, by the way), my mother has bad knees, so it created a very dangerous situation for her.  A guy in the bus was nice enough to hold the doors for my mom while I was struggling with the cart, since the bus driver tried to shut them on her while she was getting out.

We pay good money to ride these buses.  They’re constantly jacking the fare up.  Wouldn’t it be nice if they’d raised the level of courtesy and customer service they offer riders as well?  Or at least stop at designated bus stops when the ‘Stop Requested’ light is lit. 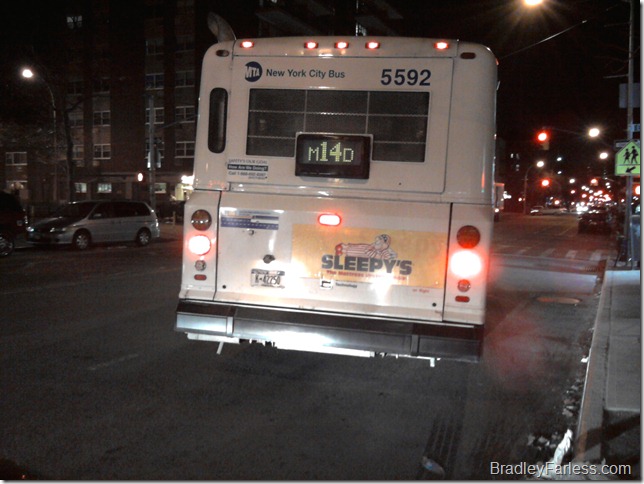 Luckily, there was a red light, so after getting out of the bus and onto the sidewalk, I took a photo of the back of the bus and then used the plate number and bus number to file a complaint with the MTA.  I wonder if I’ll even hear anything back on this?

Oh, and the kick in the ass of it all is that we wound up having to walk further than if we hadn’t gotten on the bus in the first place.