Everything has to be done in small steps, in increments.  When I got here to the Philippines I was throwing myself into the house renovations while trying to buy furniture, stock groceries and household items, find a job and figure out my visa all at once.  It’s great to be motivated, but it’s burning us out too.  We haven’t taken any time for ourselves recently, unless you count laying on the bed, exhausted, with our laptops in front of us.  Hopefully we can work in some time for that, because we’re about to put the brakes on this headlong rush, hopefully by the end of this week.

The housework is coming along nicely.  We’re getting the place cleaned up, we’re selling the scrap metal and we’re taking out the useless junk to my burn pit, which is actually more of a burn mound now.  I need to find time to scoop all of that up and put it on the curb.  It’s becoming very unsightly.  There’s a lot of things I’d like to get done around here, but I’ve moderated my plans to fit time and budget constraints, for now.  Gotta be realistic about this.

The biggest issues now are my visa and finding work.  Thankfully, we just found a lucky break while downtown at the Bureau of Immigration.  There’s an old law that says that I’m entitled to a one year free stay in the country by virtue of returning to the Philippines with my wife, who is a citizen.  That will give me plenty of time to apply for the resident visa, which takes a load of stress off our shoulders.  I’ll have to post about that process later, if it works out the way it should.  Finding work shouldn’t be difficult.  The laws here on hiring foreigners are nowhere near as strict as in Singapore, and with that one year pass and later a resident visa, the whole thing about my being a foreigner should become a non-issue.

Here are a few things that have been keeping me occupied for the last week or so. 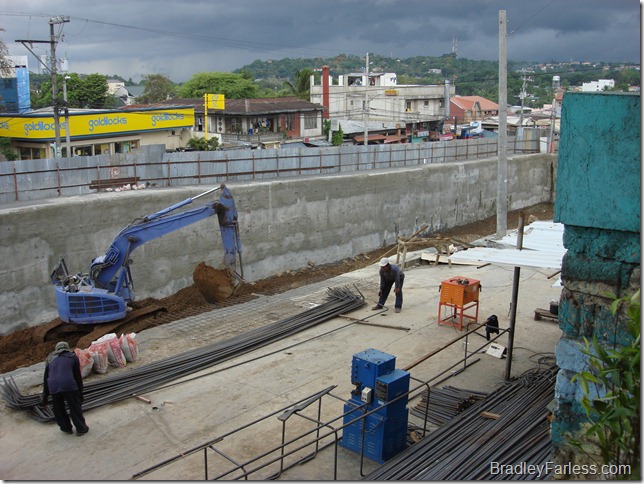 We stopped to check out this huge hole in the ground.  The construction is congesting traffic and giving the local shopkeepers a headache since some of them had to close down to make way for the work.  Eventually this is going to be a multilevel car park that should free up a lot of road space in Antipolo’s town area. 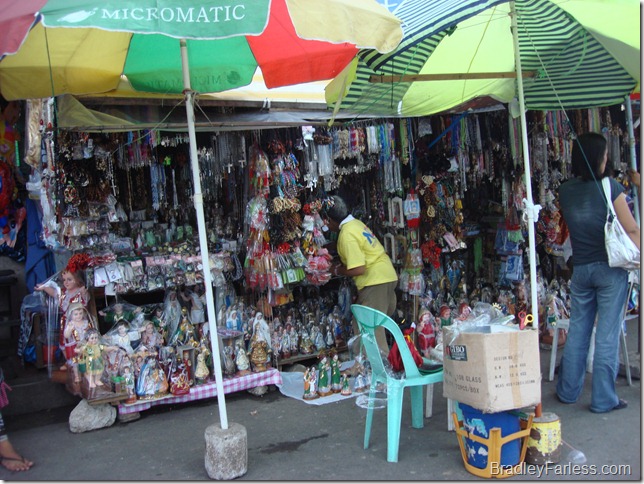 When possible, we’ve been browsing the markets.  You can find a lot of interesting (and weird) stuff in them.  Occasionally you even come across a great deal on something that you’d pay double or triple for elsewhere.  The stall in the picture above sells mostly religious stuff like creepy dolls and statues and tons of rosaries.  Ya.  Creepy.  I know they’re supposed to be religious and inspirational, but most of them look like something that would scare the crap out of me if I caught sight of them in a darkened room. 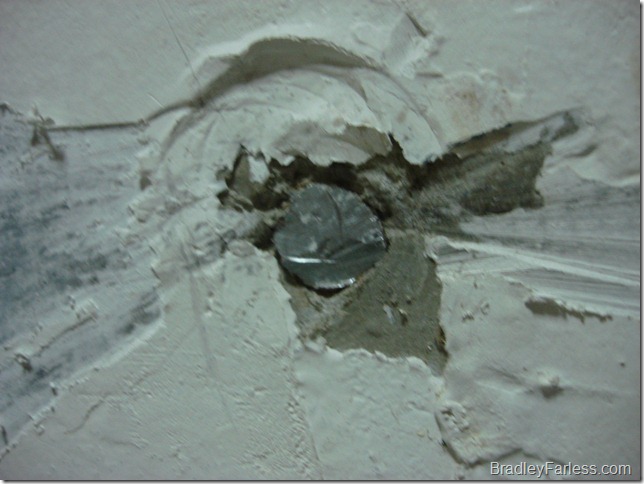 Don’t ask me why, but there was a random steel bolt sticking out of the wall in our bedroom.  I got a hacksaw and put in a lot of work to cut that thing short.  Later, I’ll cover it over and then repaint the wall.

We also spent some time in the hospital with my father in law, who is now thankfully doing a lot better than he was when we rushed him up there.  That was a stressful experience and I’m glad he’s home again.

One of the things that I like about living out here in Antipolo is the look and feel of the neighborhood we’re living in.  It’s full of people all day long.  I don’t know how, because you’d think everyone would go to work, but at any time of the day you can look outside and see kids and adults walking around or sitting down and talking.  At night it’s so quiet you can hear the second-hand on a wall-clock ticking.  That makes for some good sleep.

Here are some photos: 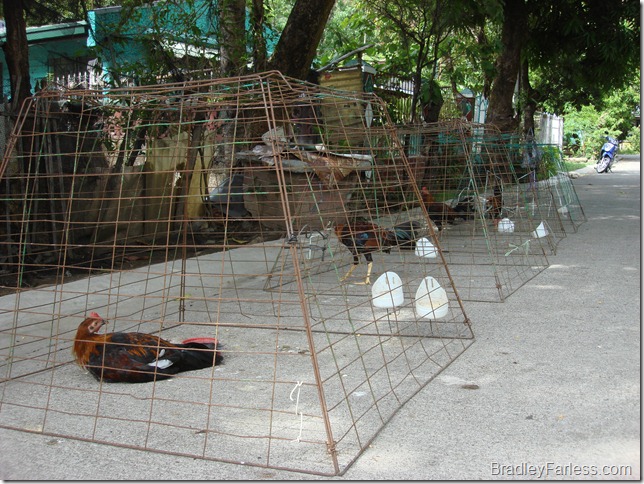 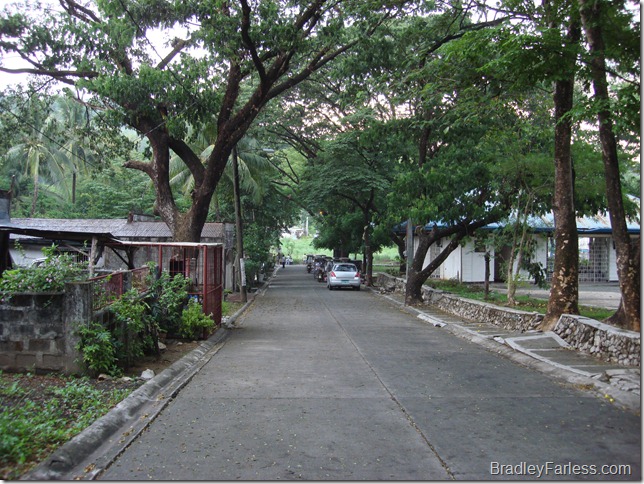 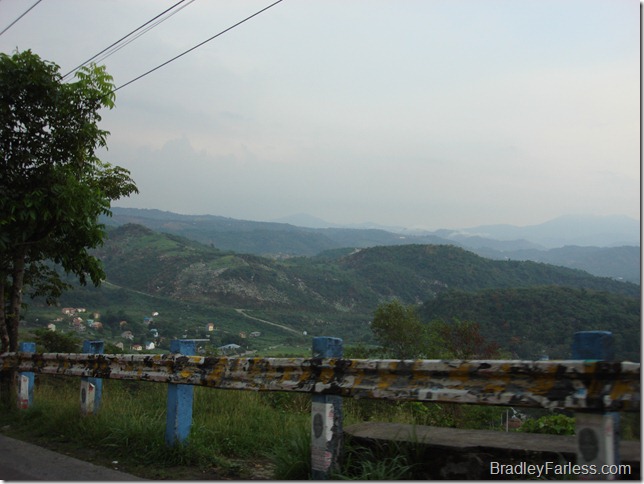 The neighborhood is down in a valley.  The view as you’re going in or out is pretty nice.

Anyhow, day after tomorrow we’ll be heading to downtown Manila to Intramuros, the old Spanish administrative area from the colonial era.  The main Bureau of Immigration office is there and we need to pay them a visit.  Afterwards we’ll hopefully get to see the Manila Cathedral and some other landmarks in the vicinity.

Also, I don’t know if I’ve mentioned this here before, but I’m posting other, less personal, stuff about the Philippines on EverythingButBalot.com. Check it out if you have time.

Rowena, I swear that at the end of every day we feel like we've run a marathon. This is one of those situations where everything has fallen into a severe state of neglect and no matter how much you do, there's always something else. Walking through the house to the kitchen usually winds up as a trip to find a trash bag, a trip to the burn pit, stopping to organize a shelf, a stop to get a cup of water, and then on to the fridge to do what I originally got up for. I know that after just… Read more »

Glad to hear things shaping up little by little…just reading about it, argh! But I can understand why you'd want to just get everything done and squared away. My dad mentioned that he's still keen on taking my to Thailand (don't wanna now even if DFA says it's safe to go) and Manila (not sure on this because I would rather visit Japan). If it should turn out that he talks me into Manila, I will definitely let you know. I don't know why it is, but I simply have no interest whatsoever in my ancestral roots. Maybe I'll change… Read more »