There are many areas in the house that require our attention, and this was one of the most serious.  When we finally got to cleaning up the turtle aquarium, I couldn’t help but feel bad for not doing it sooner.  This turtle was in a tank on the second floor.  I’m not sure who was supposed to be taking care of it, but it was sitting there in its filth, starving, with a glass full of turtle food on a nearby shelf that no one was giving him.  So, we started feeding him and kept putting off the inevitable, probably because of just how disgusting an event it would be.  We even hoped to find a cheap new tank for him so we could literally toss the old one over the balcony railing into the empty lot next to us.  That didn’t happen, so we had to take action.  We couldn’t bear to see the turtle suffering anymore.

Today while we were at the market we had to stop by the pet store to buy a few kilos of cat and dog food, so we got some new gravel, a water treatment liquid that will help keep the water clean and some turtle food, since we’d run out.  I wanted to get a filtration system for the water but they’re a bit expensive and we’re closely monitoring our budget until we get our first paychecks.  Instead, that liquid we bought will have to be enough.  That and some wire mesh screen we’re going to put over the top to keep the mosquitoes and other bugs from laying eggs in the now fresh water.

There’s only so much I can say with words, so here are some pictures and a video to help you get an idea of the disaster that was sitting in that aquarium. 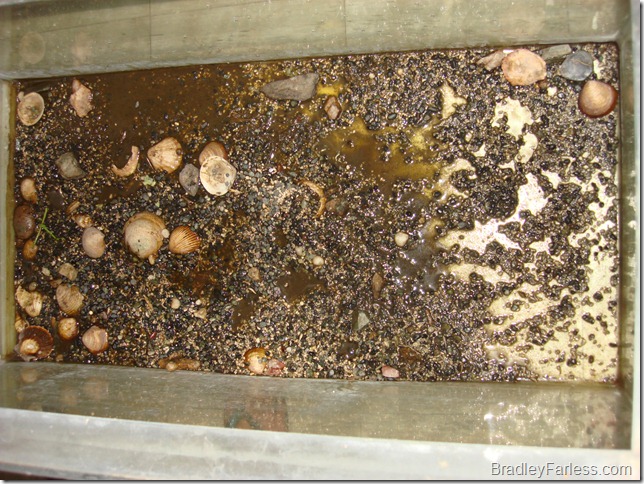 This is the tank before we got started.  It was mostly empty, without enough water, and it was packed with crawling insects, larva, and weird flying bugs that were clinging to the sides.  There was even a spider in a web.  The smell was HORRIBLE. 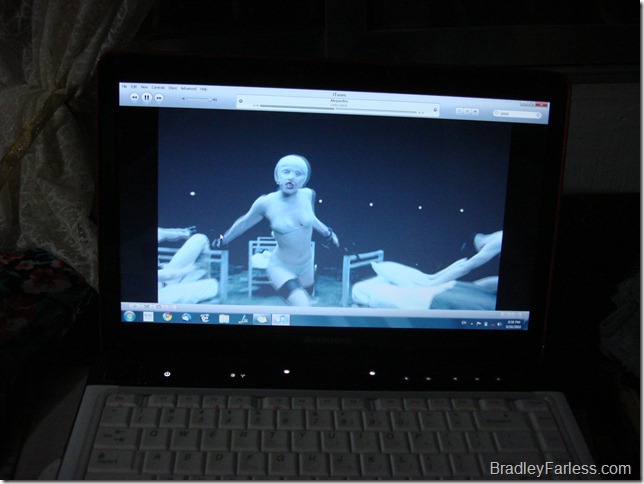 We had my laptop out for some music to keep our mind off what we were doing.  That’s Lady Gaga’s new video, Alejandro, playing. 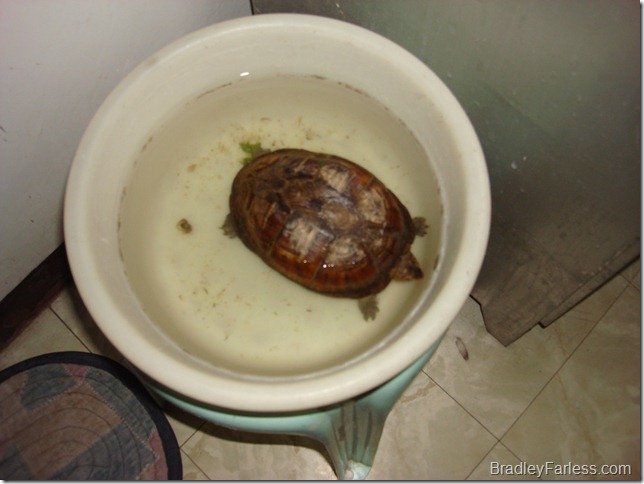 The turtle was hanging out in a small bucket while we were cleaning out his aquarium.  He was pretty impatient about the whole thing and kept trying to climb over the edge.

Here’s a video of us cleaning the turtle’s tank.  You can see some of the larva crawling around in the bottom of the tank before we washed it out.  The whole thing was filled with a heavy goo that couldn’t have been anything other than waste. 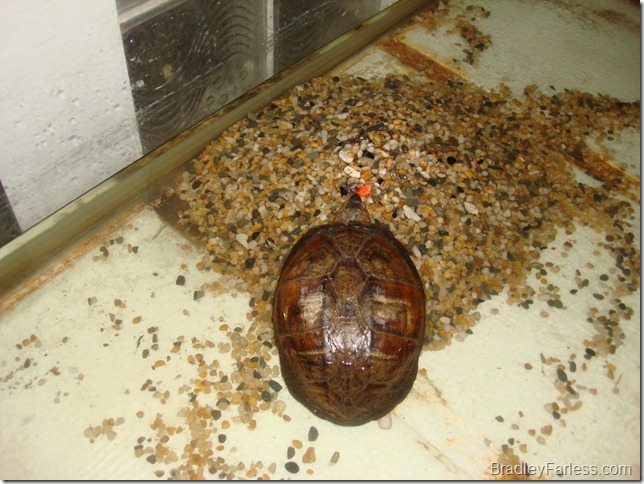 Here’s the turtle in his tank after it was cleaned.  You can see that we didn’t buy quite enough gravel to meet our needs.  We’ll have to fix that later.  It’s so damn clean you can’t even see the water in the photo.  Fantastic!

We feel a lot better about things now.  There’s no more guilt.  We weren’t responsible for the turtle’s condition, but we were becoming responsible slowly by ignoring the situation.  In the US, this type of thing would be considered a severe case of animal abuse, punishable by a fine at the least I’m sure.  Now, the turtle will live on happily with us ensuring that it’s well fed and taken care of.  If you’re wondering about the kanji symbol in the title, that’s the turtle’s new name, 亀.  It’s Japanese and it means ‘turtle’.  Spoken, it’s pronounced ‘kah may’.  Kind of lame, sure, but it’s relevant to my interests as I’ll be taking up Japanese courses sometime in the near future, if everything goes according to plan.

Oh I see what you mean now…

Ya, he recognizes the hand that feeds him. Ha!

I think so too. He wasn't looking too good when we got started but his color is coming back and he's a lot more active.

Ya. It's a great way to remember that word in Japanese if I use it every day. ^_^

wow, i think you saved that little guys life. I like his new name.

Now that he's well fed he's a very demanding thing. I didn't realize turtles were so active! He runs to the edge of the tank and stands up when we come by to beg for more food.

It was hard cleaning all that crap up but very satisfying too!

Anyway, its nice to see the turtle in the clean environment. You guys did a great job. I'm pretty sure he's very contented now 🙂

the turtle actually recognizes you!

Seems like every time I post a kanji, someone comments that it means the same thing in Chinese, but with a different pronunciation. I'm thinking that the Japanese maintained the original meanings of the kanji they borrowed, but just fitted it to their spoken language. It's really interesting. I wonder if it would be easier to learn Chinese after learning Japanese?

I'm not sure. I'll have to look at it's shell and then try to figure it out by researching it online.

Does it mean the same thing in Chinese? Or something different?

Cool, what breed of turtle is that?

In chinese, that kranji is called “gui”

Thanks man. That turtle's pretty cool. When he sees me he rushes to the edge of the tank and he'll follow my finger around. Giving him plenty to eat so he can get well again.