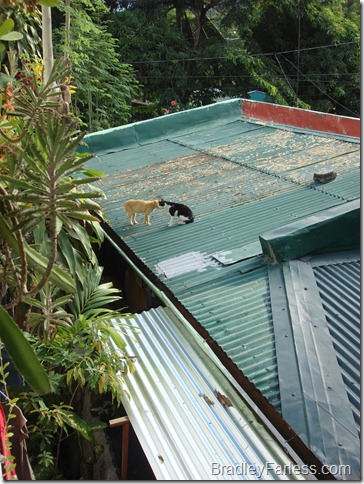 Not quite what you were expecting, is it?

I don’t know the name of those cats, but we call the black and white one Rapist #1 and the orange one Rapist #2.  It was actually my sister-in-law that came up with those names.

There are a few female cats in the house here.  Common knowledge about spaying to control breeding isn’t quite as common here as it is in other parts of the world, so none of them have been ‘fixed’.  Also, the way the houses are constructed here often leaves openings where gates have been installed rather than doors, so it’s pretty easy for male cats to make their way into a house.

The first time I saw them I wasn’t sure why they were there.  I had to ask if my in-laws had picked up new cats, but that’s when they told me that they’re the rapists that are always getting the house cats pregnant.

So, I’ve been trying to take measures to keep them out.  I put mesh over the gates by the kitchen and I try to keep the doors closed, but since there’s a big wall in the backyard, people often leave the back gate open anyway.  So, I’m constantly shooing them out.  Or throwing slippers at them to get them to run.

Making things even more complicated is the fact that there’s an old female cat living here.  Rapist #2 looks just like her, except for the balls.  I’ve gotten to where I can tell them apart on first glance, but at first I had to double check to see if it was the rapist or Glory, the orange cat that lives here.

Eventually, I want to get the cats in this house spayed.  There are even free ‘spay days’, or so I’ve heard.  That’ll have to wait though.  First off, I want to get a steady income before worrying about transporting these cats into the city for spaying.  Second, two of them are taking care of kittens and one of them might be pregnant again.

Getting kittens adopted out is hard work…

We've actually made a few jokes about that. The Siamese, Pepper, is always missing at night so we think she's out whoring around. She's a bad mother too, because she leaves her kittens behind for the other female cat to take care of.

the female cats are in on it, too. Probably, text message the suitors.