Today was one of those big bursts of cleaning activity that I mentioned in the last post.  We just looked around and decided that we couldn’t stand it anymore, changed into work clothes and then got cracking on taking out the trash and cleaning up the dining room, kitchen, the side and back of the house.

I did the side and back of the house because it required quite a bit of lifting of heavy stuff.  There was a huge amount of half rotten wood laying around, most of which looked like broken bits of carpentry and cabinetry.  I did find one piece of wood that looked like a gnarled tree branch stripped of bark.  I have no idea what that was doing back there.  I also found a basket full of torn and shredded clothing that I took out.  Everything else was scrap metal, paper boxes, Styrofoam lids, broken broom handles, bottles half full of God only knows what sort of liquids and little plastic bits from broken toys.

So, what to do with all this crap?  Well, in this rural neighborhood burning shit is completely legal, so I unleashed my inner pyromaniac and built a massive bonfire out of all of this rubbish, with the exception of the scrap metal which I intend to sell and reinvest into renovations.  I heaped on the regular household trash as well as random sticks and yard debris that was in the area.  I even through a half-rotten wooden bench into the pile.

I lit it off with burning newspaper and the end result was a big ball of flame that reached at least 8 feet into the air and kept me about 5 feet away from the fire until it burned down quite a bit.  Who knew plastic burned so well?  The wood burned down into a nice bed of coals that left me with a great place to toss other rubbish as we found it for the remainder of the afternoon.

It turned into quite a spectacle and after about an hour, half of the neighbors on the street were out to watch, including kids who decided to add whatever they could find to the blaze.  It was inspirational.  Other people decided it was a good time to burn their yard waste as well.

Unfortunately, the idea of taking pictures slipped my mind during the excitement, so I’ll just have to post a picture of the aftermath tomorrow.

I did get a picture of a giant toad I found though.  It was hiding under some half-rotten wood on the side of the house.  Kinda scared the crap out of me too.  I didn’t know what I was looking at for the first few seconds.  The toad is about the size of my outstretched hand and would sit comfortably on your average dinner plate.  The second photo has my thumb in it for a bit of comparison, but I kept my hand a good distance away.  I didn’t know if it would try to bite me or spray poison or something.  There are a lot of weird animals out here.  I had already dodged two giant brown cane spiders while clearing the back of the house previous to this find. 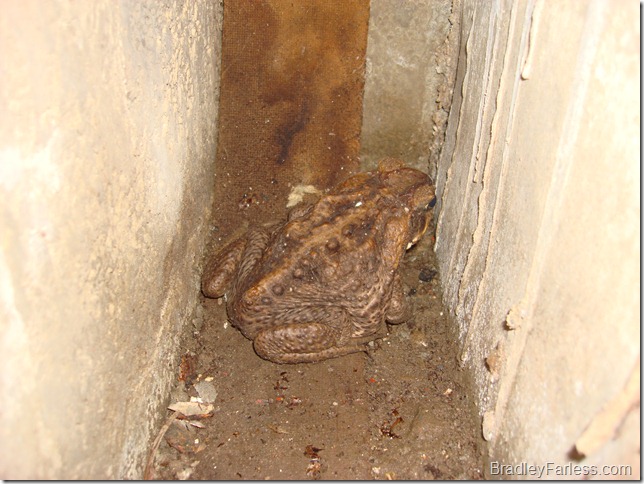 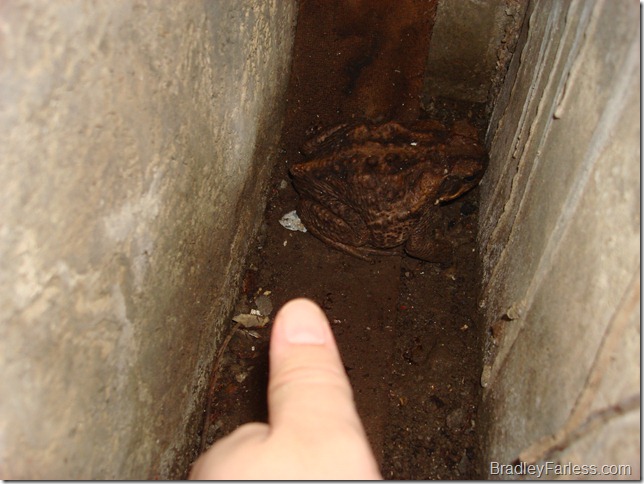 I also took a picture of the huge box full of scrap metal I collected.  That’s not all of it. 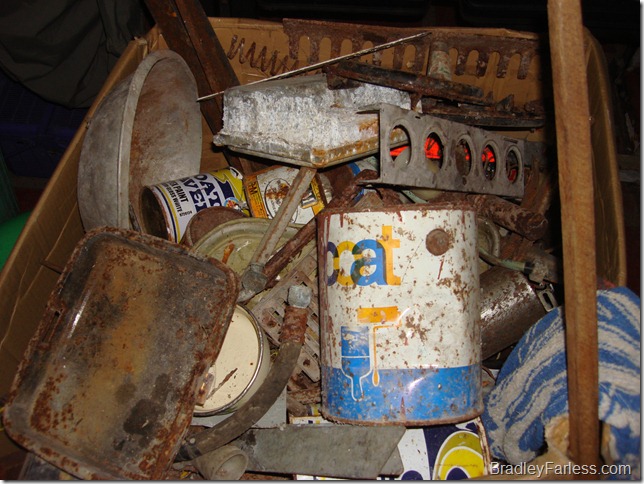 The box in the above picture is the same box from yesterday’s post, just so you have some basis for judging it’s size.

By the end of the day I was covered in dirt, ash and grime, but I was feeling pretty good about the progress we made.  I wasn’t quite as happy about the black boogers I was blowing out of my nose though.

Those spiders definitely get a bigger response from me than the roaches do. I hate those things! I walked through that area and the huge toad is still there. I'm kind of surprised because there's an army of about 13 cats in and around the house. You'd think one of them would kill it, or at least scare it off.

That pancit entry makes me want to stuff my face…

There's a lot of bufos (the toad) and a lot of giant cane spiders where I grew up, so reading this made me laugh. The toads we always prodded with sticks and the spiders….well there's nothing more creepy than to have someone suddenly say “Watch out! There's a cane spider on the wall above your head!” Ditto for the humongous centipedes and cockaroaches. Yuk.

About your comment on the pancit…I aim to try as many as possible! http://en.wikipedia.org/wiki/Pancit