For any of you that have been following my blog for a while you’ll know that I have cats and that they’re very much a part of the family.  We had cats the entire time we lived in Singapore and while some of them passed away due to illness or accident, we love them and didn’t want to leave them behind when we moved to the Philippines.  Getting our 3 ‘babies’ here from Singapore was a real pain in he ass, and a costly one too, but it’s been rewarding and it’s great to see that they’ve adjusted well to their new environment.

Things didn’t go quite as planned.  We’re staying at my in-law’s place temporarily and there are other cats here.  They haven’t had shots, they’re aggressive and they’re dirty.  We don’t want our relatively pampered cats to mix with them because we don’t want them getting sick or injured.  The area of the house we’re staying in is sort of a mini-suite.  It has its own bathroom and mini-kitchen along with a bedroom, so it’s spacious enough I suppose.  We’re keeping our cats isolated from the others in our area.  They don’t seem to mind too much, though I think they wish they had more room to play.  Eventually, we’ll be moving to a place in Manila where they’ll be able to roam the whole house, once we get window screens installed. 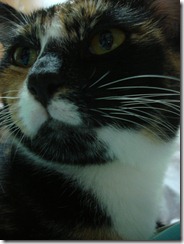 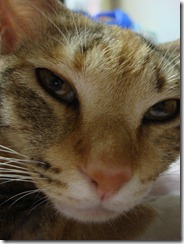 Thumper, the black cat, seems the least concerned with her change of location.  Even though she’s got sort of a weird, gimpy way of walking due to a birth defect she always seems to be the most confident, even after moving to another country.  She also seems to be the least concerned with the other cats in the house.  Marble, the one in the middle, is busy being fat.  When we first adopted her she was pretty skinny but now she spends most of her time laying around doing nothing and when it’s feeding time she tries to push the other cats out of the way to eat their food before eating hers.  That’s a problem because she’s gaining weight rapidly and the other two cats are going hungry.  I’m thinking about putting her in a cat carrier during feeding time to make sure everyone gets their fair share.  Dapper is still the big sissy she always was, but as long as she has a blanket to hide under at night she’s ok.

One of the weirdest things these cats do now is that they like to chase and eat bugs.  In Singapore, even though there were no window screens, we rarely found a bug or flying insect indoors.  There was one incident with a gecko in the room, but that’s about it.  Here, there are always moths and beetles flying around and all three cats find them incredibly fascinating.  They chase them around and when they manage to catch one, they gobble it up like it’s candy.  Kinda gross, but it doesn’t seem to be making them sick, so I’ll let them do what they want.

They also compete for the platform at the top of their scratch post / gym, because it gives a view out the window.  Things outside are a lot more lively here than in Singapore and they want to be able to watch.  They can sometimes see and hear chickens, other cats, dogs, children playing and people hanging out in the street.

I’m glad to see how well they’ve adjusted and that they’re having a good time.  I hope they’ll be just as quick to adapt the next time we make an international move.  Hm.  That reminds me, it’s almost time for them to get more shots!

For more information on importing cats to the Philippines from Singapore, click here.

Eh. My wife is scared to death of roaches but I think I prefer them to mice. Mice have been the causes of most of the great plagues in history, and it's only a matter of time before the black death resurfaces.

They are pretty dirty… That and they misbehave too. I'd try to take better care of them, but they're not my cats to start with and we can't afford to try to save them all you know.

Eh. My wife is scared to death of roaches but I think I prefer them to mice. Mice have been the causes of most of the great plagues in history, and it's only a matter of time before the black death resurfaces.

They are pretty dirty… That and they misbehave too. I'd try to take better care of them, but they're not my cats to start with and we can't afford to try to save them all you know.

I'm kinda lucky then because I'd much rather deal with a mouse than a roach! I like the way you call them the 'dirty' cats LOOL!

It seems really weird, but most black cats all seem to look just about the same and even behave the same. One of the 'dirty' cats in the house is a black cat and I keep confusing it for my cat, thinking she got out of the room somehow. There's also a black cat that lives in a neighbor's house and one time we picked it up and brought it in the house because we thought it was the 'dirty' cat… but he was already in the living room. ^_^ So, your cat likes to bring in mice? I heard… Read more »

Cool! our black cats do look similar!! although I think your ones eyes are greener! Glad to see they're settling in, also your lucky your cats are ridding you of your pest problem mine is just creating one constantly bringing in mice!!