That’s the best way I could think of to describe this particular practice in the Philippines. 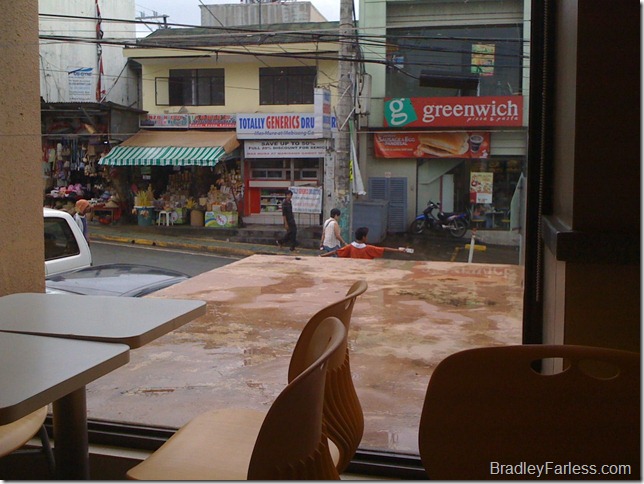 The guy in red is trying to direct cars on how and where to park at the McDonald’s I was in when I took the photo.

Depending on where you go, there might be a parking lot available for your car.  Most places you just have to park along the street, but the franchise establishments usually have at least a few parking spots, like Max’s Chicken and McDonald’s, where the above photo was taken.

These restaurants don’t hire people to stand out in the parking lot and direct people about where to park.  This opportunity, however, has been coopted by people looking to make a buck doing whatever they can.  So, it’s not uncommon to see randomly dressed people standing in or near the road trying to direct people as to where they can park.  Then, they try to use hand gestures to tell you how to park and later, when you’re leaving, when it’s safe to back out into the road.

For this service, they expect a tip.  Is their service necessary?  Probably not except in the most bizarre of parking arrangements.  What they’ve done, however, is position themselves so that you feel like a complete jackass if you ignore them and drive off.

So, as an addition to the other costs of owning an automobile in the Philippines, you can expect to feel obligated to dish out a few pesos here and there to people who have become self-appointed parking attendants.

Well, in a perfect world people would just help each other, but it's possible that people doing that were usually transportation drivers that had to find a way to keep their income coming in so they and their families wouldn't starve. They couldn't drive their FXs and Jeepney's in Manila since it was flooded. I know what you mean though.

its kind of embarrassing to admit it but there are a lot of opportunistic filipinos here. During the ondoy tragedy, I heard that some people came up with makeshift “vehicles” made of planks of wood to transport people from one area to another. Of course it involved a fee. Not hefty but till during a tragic thing like that, people should be helping their countrymen instead of seeing it as a way to rip em off of their last few pesos.

What? This is so bizarre. I've spent quite a bit of time in NYC, in that area too. My mom's place is on 13th St. down towards the projects. I used to hang around Union Square, especially the Barnes & Nobles there. Sad that they're shutting down by the way. Anyhow, I didn't expect to hear that this happens in the US too. I wonder if the guy was an immigrant? Or maybe this is just something that people try to do in big cities?

Common in NY also.I was in the East Village and spotted a parking space on Ludlow street around 1am on Friday night.Out of no where, comes a (possibly) homeless man to steer me in with both hands like an airport director.He ran across the street, nearly being hit by my car.(I had it already) He then runs behind my car to stop oncoming traffic to allow for ample backing up space during parallel park. (that was actually pretty cool). I gave him a few bucks because parking in that area is crazy, then again… I did it all by myself.Pretty… Read more »

Wow. It really must be a 3rd world cultural thing then, because you could've been describing the Philippines just as easily. There are people that do that here too, but mostly to pedestrians. They walk up and down the street with boxes or trays of various things like tissue and cigarettes trying to sell to anyone who wanders too close to them. They also wait at traffic lights in high traffic areas to peddle to drivers. Their greeting? “Hey boss!” “Hi boss!” I suppose the term “boss” has a different, more flattering connotation when used in the Philippines, and wherever… Read more »

It's possible that since the freelance attendants here are usually african immigrants, it would be ridiculous of them to insist that italian nationals should pay. Already immigrants are lucky if they have legal permit to stay and work here, but not to extort chump change from those who host them. This brings up another scenario where immigrants, often africans, situate themselves at parking lots for large department/grocery stores. They carry around a box of stuff to sell – tissues, trinkets, etc – and they'll approach you as you park the car. They are very friendly, greeting you with a “Ciao… Read more »

Wow. That really doesn't make sense in that situation, if you already have to pay for the parking. Here, they make sure they're in a spot where you can't get around them without them 'helping' you to park. I suppose you could ignore them anyway, but the next time you come they might block you from parking and create a scene. People seem to be like that here. They're very friendly until you do something that they feel is cheating them of income they should be getting from you. I'm reminded of the incident with the driver that threatened to… Read more »

We've got that here in Italy too (big cities like Milan, Lecco, etc) but we either look for our own spot and wave them off or simply just don't give them anything. The parking spots already require a ticket that you have to buy from a nearby ticket machine to put on your dashboard, so “freelance parking attendants” will essentially end up working for…..free.