The news this morning made me look at the video I posted previously in a whole new light.

Was this done intentionally, as part of the plan to botch the cleanup as a protest?

A lot of people were saying that the cleanup after this recent blizzard was botched.  It was slow, ineffective, and lots of people suffered for it, and now we know why:

Miles of roads stretching from as north as Whitestone, Queens, to the south shore of Staten Island still remained treacherously unplowed last night because of the shameless job action, several sources and a city lawmaker said, which was over a raft of demotions, attrition and budget cuts.

“They sent a message to the rest of the city that these particular labor issues are more important,” said City Councilman Dan Halloran (R-Queens)…

Their labor issues are more important than what?  The lives and safety of New Yorkers?  I read quite a few stories where people were seriously injured, or where deaths occurred because emergency services couldn’t reach people in need.  One that stands out in my mind was a woman who gave birth in the lobby of a building.  Her baby died before EMS could reach her.

Her baby died to protest budget cuts.  Good job, sanitation department.  You’re real fucking heroes today.  Someone should be made liable to criminal charges for the deaths caused by the unplowed roads, since they’re direct results of a plan to botch the cleanup. 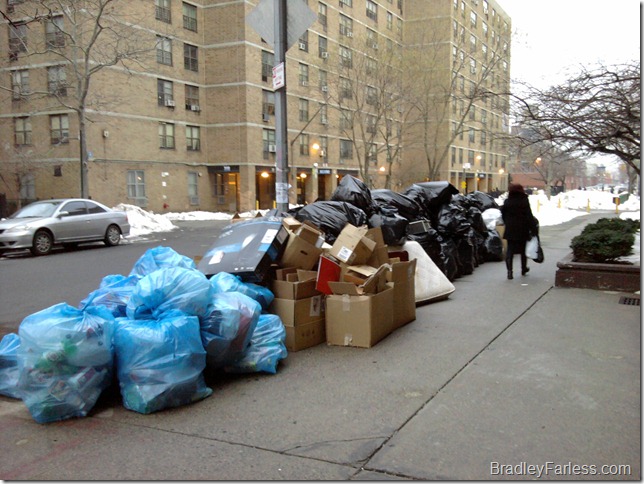 Want to hear another problem this is causing?  Well, since the sanitation department was intentionally slow with cleaning up the snow, they took longer to get back around to their main purpose: picking up the trash.  Now, I don’t imagine we’re going to see any outbreaks of diseases just because the trash wasn’t picked up for a day, but the trash is really piling up, and it’s everywhere.  Additionally, with the sanitation workers still dicking around with the snow, or what’s left of it now, the regular cleanup of streets and the city trash cans on the corners is behind as well.  It’s disgusting.  Most of 14th street looks like one big garbage can. 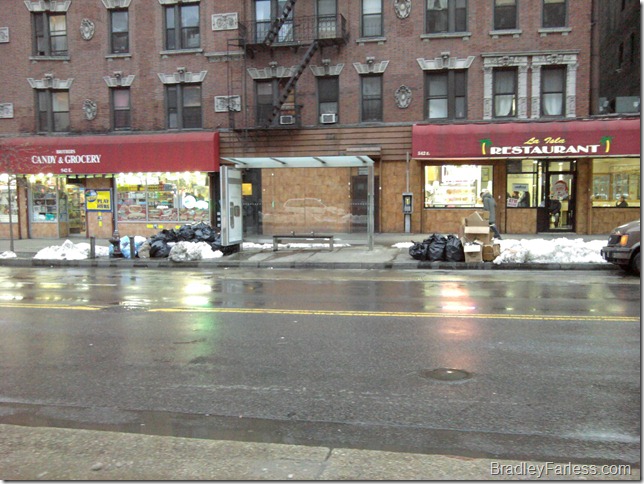 This whole problem seems indicative of a massive lack of common sense to me.  Whoever planned to have this cleanup botched should at the least lose their job.  Seriously.  And whoever took part should receive demotions and pay cuts, exactly what they were protesting against.  I’m all for protesting, but not when it endangers peoples’ lives.

I remember hearing about trash pick-up being delayed again and I just can't understand it either. The roads aren't blocked, so what's the problem right?

Feb. 4th 2011 and again in SI, NY still no garbage pickup over 2 weeks. What are they doing? It hasn't snowed that many days for not to have a garbage pickup. No place to put the Garbage. Hit the cans trying to get into the driveway. Anyone know if there was a cutback in the sanitation dept. I am wondering what they are doing today because again tomorrow snow coming. If i leave my cans out I will niot be able to put the snow up on the pile of snow, the cans will be in the way. Have… Read more »

pretty sure they beat that baby to death. just sayin