This is a topic I could make many, many posts about, so I’ll just label them all “New York city Graffiti” with a different part number.  Unlike some other places I’ve lived, including other places here in the US, graffiti and murals are prolific here in the city.  In fact, you could almost say it’s encouraged as a method of self-expression.  Some people become so good at painting them that they make a name for themselves.  I can’t think of any offhand, since I just moved back after being gone for quite a long time, but my mom sometimes sees artist ‘tags’ (their signatures on the graffiti) and recognizes them.

Here are two examples of graffiti: 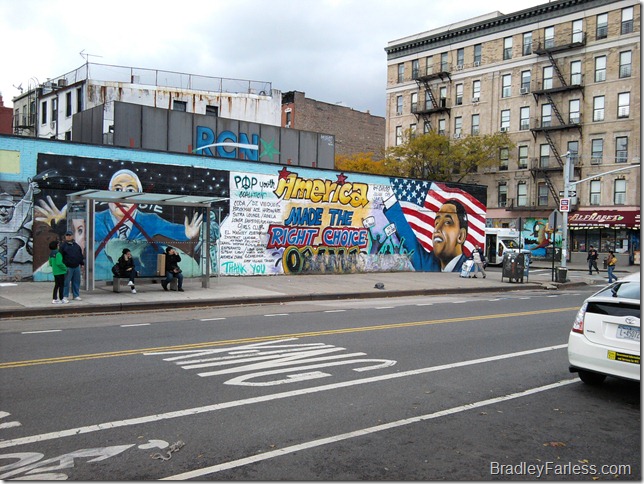 This one is obviously political in nature and is on Avenue C around 5th or 6th Street.  I should have taken another photo of the long message to the left of the main slogan.  Maybe next time.  Click the image to see a larger version where you might be able to make it out. 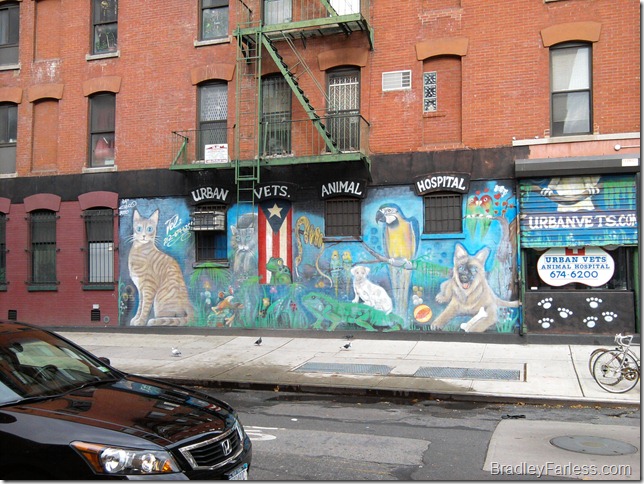 This one is a mural for a business: Urban Vets Animal Hospital.  It’s really nice looking and it’s the cat to the left that caught my eye.  I thought my wife would appreciate seeing this.  Unfortunately, the veterinary hospital itself has something of a bad reputation so I’ll probably never go in.

I'm sure you can. You're good already.

i miss KL. neat post. those graffiti are nice. i wish i can do something like that in my room. =)

Ya, I suppose that's a very fine line. My guess is it all depends on what popular opinion considers tasteful at the time. This stuff isn't too common in the tourist areas, but it's all over the Lower East Side, and probably the outer boroughs too, though I don't go out there much. I'm looking forward to discovering more. The mural in my header is on one of the walls of a drainage canal in Kuala Lumpur, Malaysia. I think I took the photo while standing on the Pasar Seni LRT platform, waiting on the train. From what I remember,… Read more »

wow, very cool. i always wonder though, when it comes to graffiti, what is the line between art and vandalism. btw, where is the wall mural in your header from?