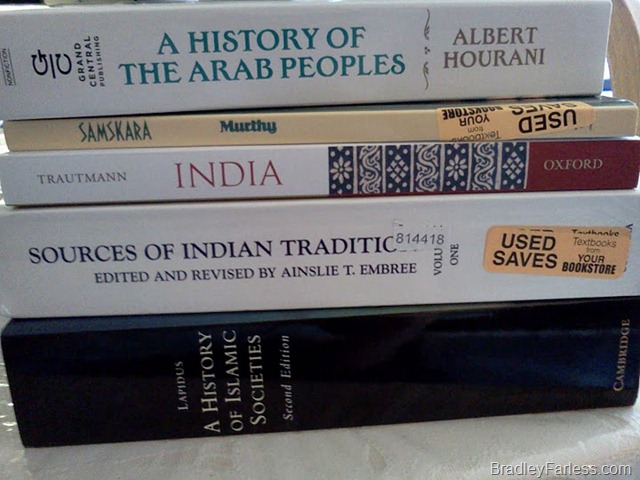 Fall Semester started yesterday.  I didn’t have much of a break, since I took courses over the Summer, but two and a half weeks off seemed long enough to me.  I spent most of that time rotting my brain with video games.  I haven’t sat around playing video games for hours on end in years and it was great!  Besides a game called Vindictus (by Nexon) that I’ve been playing casually since around March, I started using ‘Steam’ (My Profile) and played Team Fortress 2, Left For Dead 2, and Borderlands, among others.  Hopefully I’ll still have a little time to hack up zombies and make bandits’ heads explode with a shotgun, but considering how thick some of the books are, I’m glad I have one of those nifty book lights that clips on, because I foresee a lot of late night reading.

Some good news is, I finally decided what I want to do and declared my major as History.  I still have to figure out what particular area of history I want to focus on, though I’m leaning towards Islamic or Medieval History.  I’m also considering doing a double major since a history major only requires 11 courses (33 credit hours) out of the total of 120 credit hours required to get a BA.

This semester I’m going to be taking two history courses that will count towards my major:  Middle East Under Islam and Traditional Civilizations of India.  The books in the picture above are for those two courses.

I’m also taking a 6 credit course involving English and Writing.  It’s called ‘Our City’ and focuses on literary perspectives on New York City.  I live here, so why not?  It might help me discover some of the history behind New York City.  Also, it fills a requirement.  I’d rather have taken a course that covers dystopian literature, but it wasn’t available and I want to get that requirement out of the way.

I also wanted to mention that Hurricane Irene is affecting the school systems here in NYC, obviously.  I got an SMS, an email and three phone calls from the CUNY alert system letting me know that CCNY will be closed today, tomorrow, and possibly Monday.  I don’t really care that the school is closed today or tomorrow.  In fact, it might not even be bad if it’s closed on Monday, since the first day of a class is usually a ‘get to know each other’ kind of thing.

Hurricane Irene has New Yorkers panicking.  By now, all mass transit will have shut down, including the airports and Amtrak.  There are mandatory evacuation zones and they may even cut power to prevent the power grid from being annihilated by salt water inundation.  I also looked at a map and discovered that the block my apartment building is on is just inside an evacuation zone.  The evacuation zone area cuts inland only for my block.  I don’t know how to feel about that, but if the block south of me and the one north of me aren’t in an evacuation zone, then WTF?  I can see them from the window and could hit them if I threw a stone.  They’re also on the same level as this building, altitude-wise.  I think I’ll stay put.