Well, it happened yesterday so this isn’t so much a post about looking forward to observing it as it is about, “Oh look. Llamas and donkeys. Why are those in Campos Plaza?” 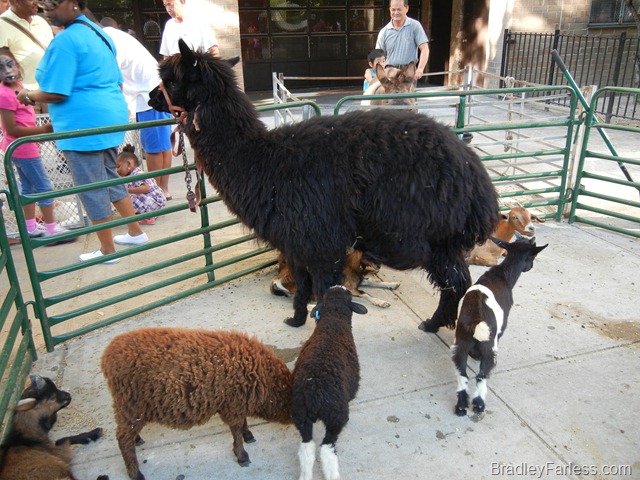 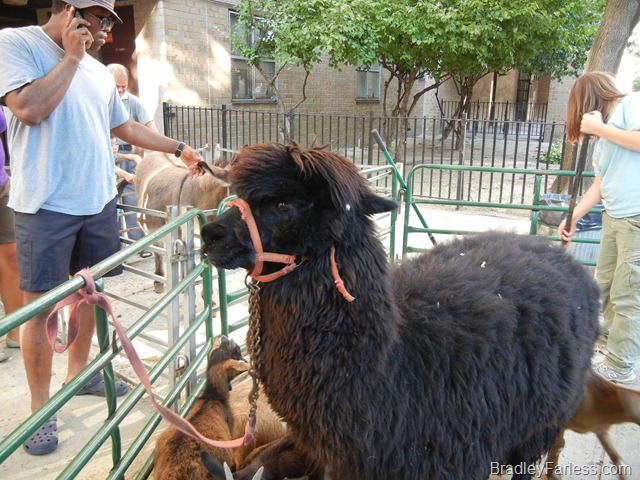 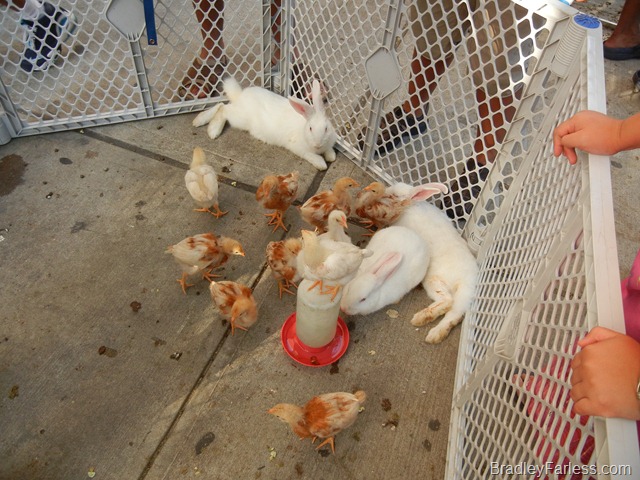 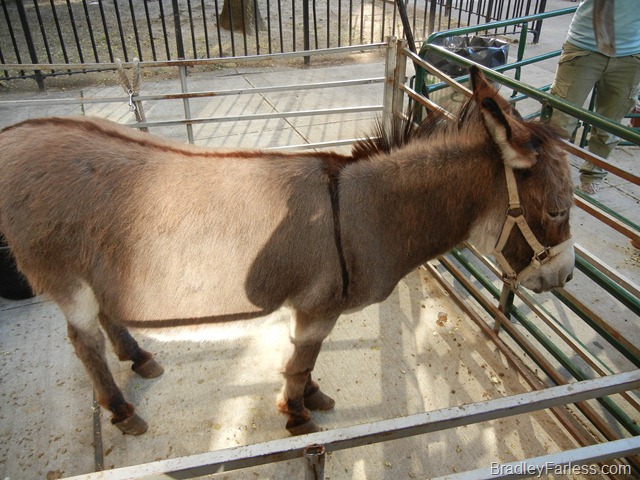 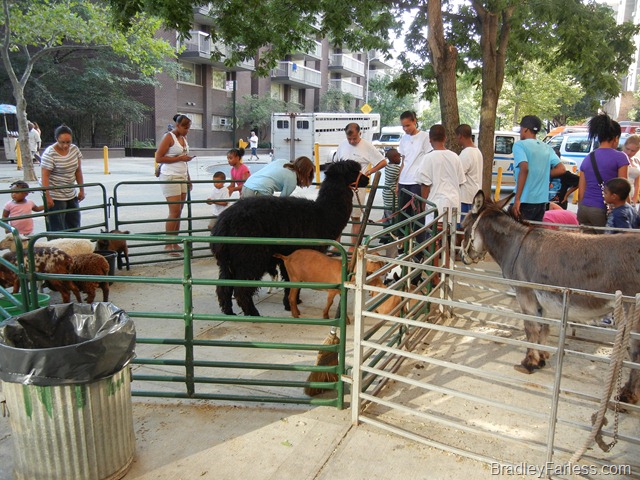 This immediately reminded me of a joke I heard about Singaporeans.  A teacher (in Singapore, with Singaporean students) asks her young students (think, 8 years old) to draw pictures of farm animals.  So, the students happily sit around drawing for awhile and then present their work to the teacher.  One boy walks up and proudly shows her his drawing of a chicken, and it looks really good, except the chicken he draws has no feathers on it.  She asks him why he drew the chicken without feathers, and he asks, “Chickens have feathers?”

This is funny, but I completely understand the reality behind the joke.  In a place like Singapore, which is highly metropolitan, it would be very rare for kids to see any chickens other than the plucked and cooked ones hanging on hooks at the hawker centers.  Even when I lived in Georgia, I would get excited at seeing horses or cows or other farm animals. 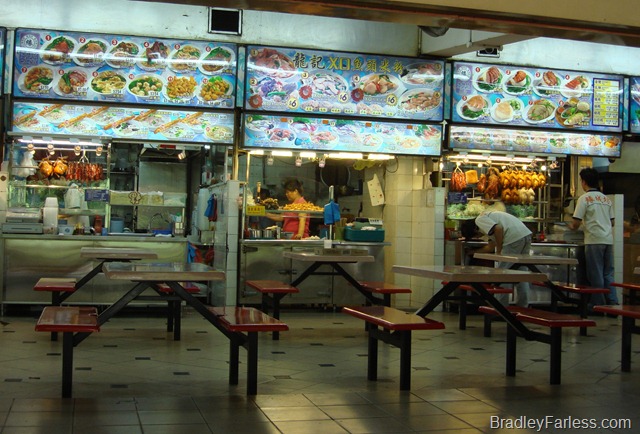 Anyway, when I was heading home yesterday, I smelled animals and I saw a lot of people in the square between a set of buildings so I went to investigate and these guys in the photos above were the first thing that pulled my attention.  It was fun! 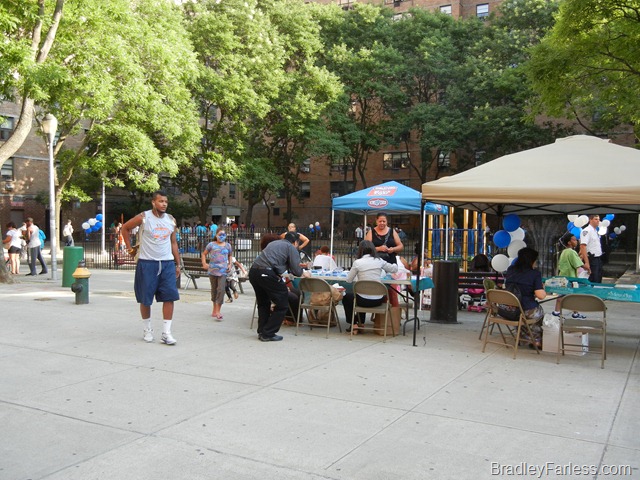 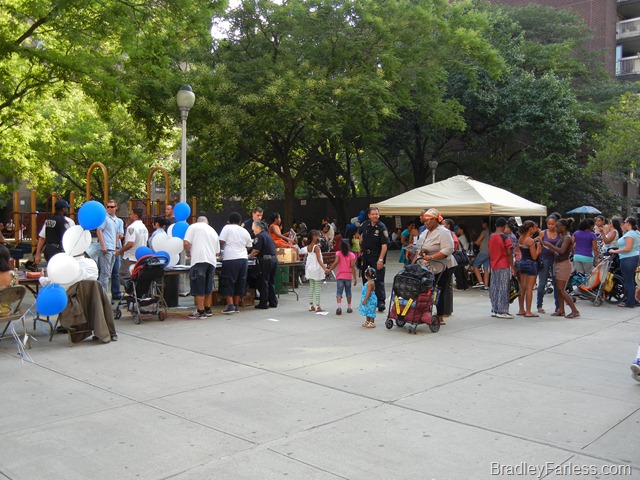 I didn’t investigate all of the booths, but the one to the right in the second picture above had face painting, which is why the line was so long.  I imagine the table on the left in the above picture had something to do with distributing literature regarding crime prevention, since it was manned by NYPD officers. 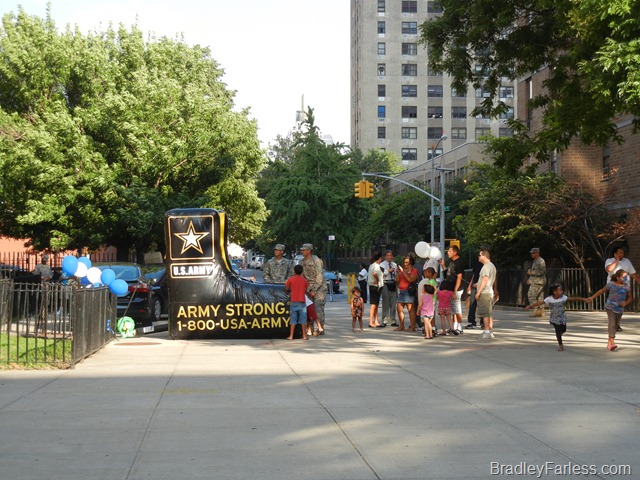 I was, of course, drawn to the set up in the photo above.  I was curious to see what the recruiters were up to, having been in the Army myself.  I wound up spending about half an hour chatting with Sergeant First Class Chen.  He’s a pretty nice guy.  We traded a few stories.  I told him about my time in service and he talked mostly about the benefits and stability of joining the Army Reserves after leaving Active Duty, but that’s his job after all.  We did talk a bit about some of the things that make you say, ‘WTF?’ while you’re in service.  It was nice to reminisce for a while, about the time I spent in the military.  It wasn’t all good, but it definitely wasn’t all bad either.

It was a pretty nice event overall, and it was good to see something positive taking place in the square for a change.  The area is known for violence and drug related shootings.  Ironically, the ‘Night Out Against Crime’ booths started shutting down and wrapping up as the sun set.

I'm glad you enjoyed the post. I miss Singapore sometimes too. =)

oh i see a drama llama! lolz. great post. i miss singapore and how much fun we had over there.