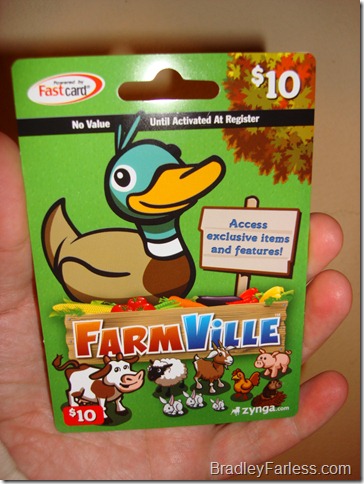 You see, I’m in Georgia right now visiting relatives and I’m staying at my aunt’s house.  My mother, aunt and aunt’s mother are all FarmVille addicts.  After a few nights of laying around just surfing the net as usual, I got caught up in their constant chatter about the game.  I used to play FarmVille, over a year ago, but gave up on it as too boring.

There have apparently been some big changes since then, including bakeries, wineries and spas, as well as cooperative crop growing with benefits, all of which have done nothing but make the game far more social, and in a way, more obligatory.  It locks people in and makes them feel like they’re required to keep playing for their friends’ sakes.  It makes good sense, from a business perspective.  It snagged my attention because I used to really enjoy crafting (weird, but I did) in MMOs like UO, DAoC, FFXI and WoW.  Before I knew it I was loading up the game to see what they were talking about.

While I was overseas I heard a lot about how FarmVille was taking off, and how people were dropping real cash on FarmVille items via these cards.  I laughed it off, but now here I am with FarmVille running in full swing and 110 Farm Cash (about 20 real dollars) worth the virtual currency loaded into the thing.  Granted, I haven’t put any of my own money into it…yet.  My mom and aunt seem to think of it as an investment towards their further enjoyment of the game, but I’m probably going to be hard pressed not to grab one of these off a shelf myself sometime in the near future, after checking to make sure no one is looking first of course.

It’s oddly addictive, and yet pleasantly casual with no massive demands on my time.  Well, not too much anyway.  And what’s even more odd is that more real cash has gone into my game during the last week than I ever put out for any mainstream MMO monthly subscription.  Zynga really does have a cash cow on its hands here.

Now, whether I continue to keep up with FarmVille after I get back to NYC and start working again is up for debate, but for now… I have to go check on my grapes.

I fell prey to the dark side.

I played Cafe World for a bit too, but got bored with it.

I suppose it is pretty damn addicting. I guess I'll use it to kill time until my wife gets here.

I didn't realize they ever charged for a Second Life subscription. I thought it was always free.

So far I think the one of the few things that I paid online was a Secondlife subscription, and then some months later they made it free.

heheh, i did also played farmville a year ago, i stopped, even cafe word, right now im playing car town on the side. but never i did shell out real money into the game unless it's an mmo subscription. =D

but hey are sure addictive alright..