Once again, I seem to have found something in Filipino culture related to menstruation.  First it was washing your face with menstrual blood, and now it’s a food product.  The bread in the picture below is commonly known as pan de regla, or pan de mens(truation), because it resembles a used sanitary napkin, chock full of red gobby goodness. 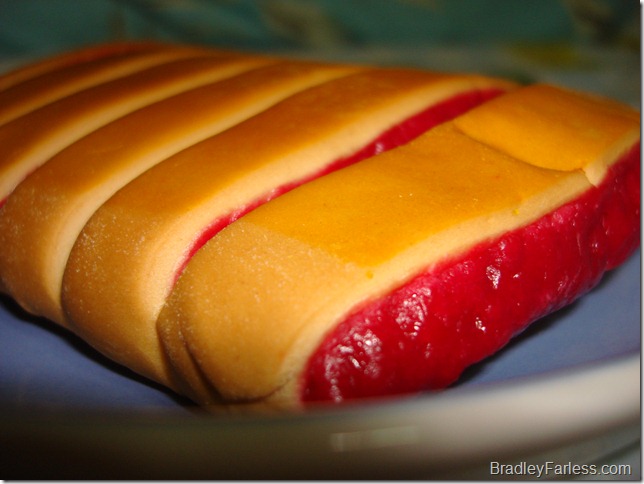 This type of bread can be found in nearly any bakery in the country.  It’s a poor man’s bread that can be purchased for very cheap prices due to the way it’s made.  In the Filipino spirit of not letting anything go to waste, bakeries recycle unsold products into a sort of pudding, which is then sweetened and used as a bread filling.  The filling gets its bright red hue from food coloring and while you can sometimes find it in other colors, red is the most common.

The taste is ok.  I’m not exactly amazed by it, but I suppose you can’t expect much from what amounts to days old bread smeared in between layers of fresh bread.

That's why they say it's more “pan” (fun) in the Philippines!

I think it's interesting that in such an overbearingly Catholic country, breads like pan de regla or monay even exist as commercial products. The puritanical assholes in charge over here like to ban anything that could, might, or has a potential to cause any mental, emotional, or physical harm to any segment of the population, which is why life can get very boring and sterile here.

hi brad, monay bread is ubiquitous in supermarkets and bakeries… it's delish like a bready ensaymada….

oh, you won't believe the fun we had (talking about it) when the movie American pie was shown…

Thanks, Mr. Retovado. The way you described it didn't sound too appetizing, but after looking it up, I wonder how it tastes. I found some interesting stories about it, which I think I'll share as a blog post later.

I think the 'pan de regla' name is used mostly in the Manila area. I read that it's also referred to as burikat or alembong, depending on where you go.

I remember liking this when I was really young but I didn't know that this was called pan de regla. It's always called kalihim (secretary) because of the secret filling in the middle, in our province.

Custom dictates that the neighbor invite the owner over for dinner. Otherwise it's considered bad manners.

My wife had told me about that. She said that someone in the neighborhood ate one of her family's dogs. I don't remember the reason why they didn't call the police. Maybe that was before it was made illegal here.

So, when you planning on trying out this delicious Filipino delicacy? =)

fyi, the Filipino's in the islands eat dog. Last year, two of them were convicted for stealing (relinquishing) a family dog that a golfer had tied up at the club house while he was out on the golf course.

your PG-rating has been revoked