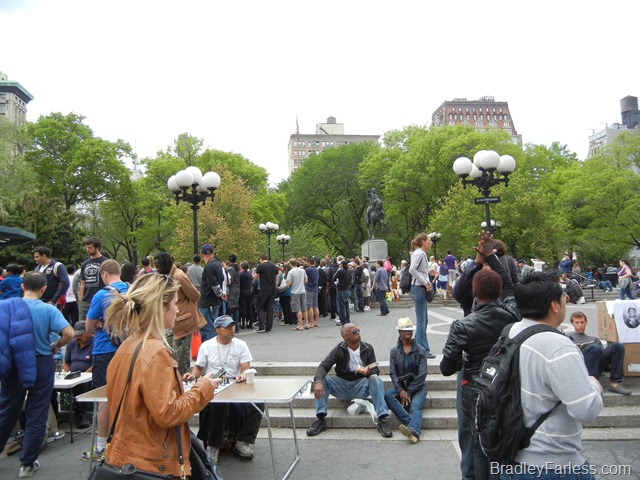 I went up to the Metropolitan Museum of Art again today.  I’ll blog about that later.  For now, I want to show you what was going on at Union Square that cost me some of my museum time.  Like I keep saying, there’s always something going on there and when I was passing through, I saw a huge crowd gathered by the entrance to the subway, so I stopped to check it out. 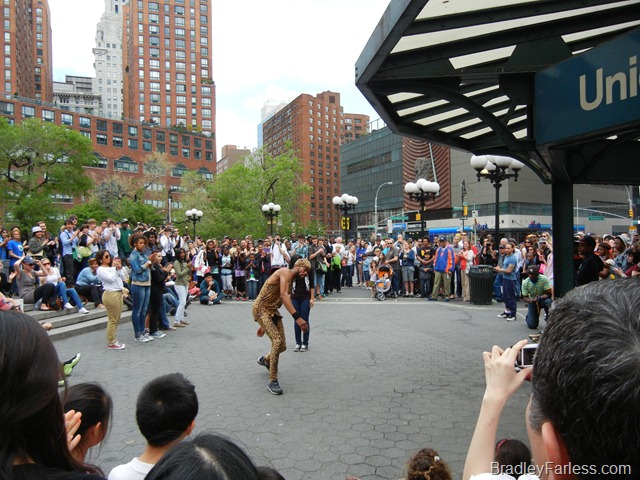 This colorfully dressed guy had just jumped over the girl that’s standing behind him there, in the center of the open area.  I took this photo right as he was landing, though I meant for it to be him in the air over her.  This wasn’t impressive enough, so he decided to give us an even bigger show, which I recorded:

I was impressed.  I half expected him to land on the last girl, turning this otherwise exciting performance into a tragedy.  There are very few places in New York City that you can go without seeing some sort of live performance by a regular person looking to make some extra cash.  Some are bad, but some, like this one, are pretty damn good and worth the time to watch.  I try to keep some change in my pocket for when I see stuff like this, or when someone is playing music (on an instrument, not from a boombox) in the subway and it sounds good.

Well, some people would argue that entertaining the public is a useful skill, and it looked to me like he made pretty good money doing a few tricks. When they passed around the bags to collect donations, I saw 5s and 10s going into the bag.

u have to wonder if he could have used his time to practice something more useful.