When I entered the Philippines on June 1st I entered with a tourist visa stamp with the intention of filing for a resident visa and possibly extensions to hold me over until it was approved.  When we went to the Bureau of Immigration satellite office in Makati, however, we were told that filing for a resident visa can take up to 3 months.  Extensions might not cut it and it would be costly, so we asked for advice.  The lady at the office asked us if we were married and if we’d entered the country together along with a copy of our marriage contract.  We said we had, so she asked us why we hadn’t availed of the ‘balikbayan’ privelege.

We had no clue what a balikbayan visa was.  We hadn’t seen anything about it on the Bureau of Immigration site while researching visas.  It might be there, but since it’s so unusual a phrase, I might have overlooked it.  She told us that since my wife had been out of the country for over a year and was an OFW (Overseas Foreign Worker), I, as her spouse, qualified for a 1 year balikbayan visa.  She said that we should have approached the immigration counter at NAIA together when we first arrived and I would have received the visa with no problem.  Oh, and I’m not sure how this works but the balikbayan visa isn’t actually a visa.  I don’t know what you would call it.  Also, the best part is that it’s completely free.

Here are the exact requirements to qualify:

Since we didn’t get the visa at the airport, we had to take a few extra steps.  We wound up having to make a trip to the main office of the Bureau of Immigration in Intramuros, an area of Manila that used to be home to the Spaniards during the colonial period.  Once there we approached the information desk and stated our case.  The clerk at the desk told us to proceed to the Immigration Regulation division on the 3rd floor where we again stated our case to the Immigration Officer who helped us.

Since we didn’t follow the steps appropriately, it was within the discretion of the Immigration Officer to tell us to leave the country and then return to get the balikbayan visa, but we were polite and had our documents ready so she was more than happy to help us out.  She had us fill out a form requesting the change and then made a notation on my passport visa page, amending the tourist 21 day visa stamp to a balikbayan visa. 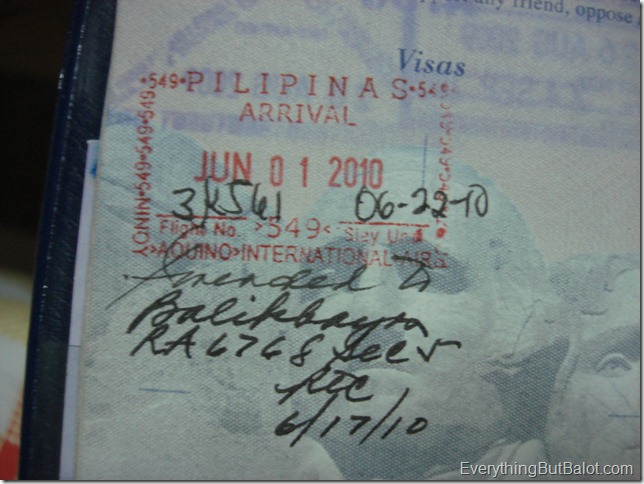 So, now I can stay in the Philippines for up to 1 year at no charge, which gives me more than ample time to apply for the resident visa at my convenience.  Living in the Philippines comes with a cascading torrent of fees, but for once the system worked in our favor without costing us a few thousand pesos.

If you’re planning on coming to the Philippines and you qualify for this, save yourself some time and get it done right at the airport.  Just remember that you have to arrive together, approach the desk together, have your passports (obviously) and your valid marriage contract.  If however, you’re already here and didn’t know about this, hopefully this post will give you an idea of how to get it amended.