The process of cleaning this house and doing repairs is going to take longer than expected.  The biggest time killer has been going into town and finding the best deals on materials like paints, cement, brushes, and other necessary items.  My in-law’s house is in a rural neighborhood in a valley between two mountains, outside of Antipolo.  It takes about 30 minutes to get into the town by tricycle and then walking around from small shop to small shop can eat up a whole day before you know it.  Next thing you know you’re dizzy from the heat, haven’t found a damn thing and the sun is going down.  Then you have to get something to eat and get back to the house before the crazies start coming out.

There hasn’t been a whole lot of progress to report since the door was put in.  Nothing major anyway.  The cement is done on the door and it needs to be painted.  Also, I rearranged the second floor landing (which is as big as a bedroom) but I’m holding off on photos until I finish putting everything back in place.  Just getting the furniture moved was a lot of hassle because everything was covered in boxes of junk that I had to either carry up to the attic or down to the curb, depending on its potential usefulness.

What I’m planning on doing with the 2nd floor landing is turning it into a small library.  This house may be packed with useless crap, but it’s also packed with TONS of books, most of which are still worth reading or have a lot of practical value, like history books, encyclopedias and stuff like that.  There are also manila envelopes full of college notes, papers and projects that belong to my wife and her brothers.  I want to arrange it all by category and make the area useable.  There’s even a couch, but you can’t get to it now because it’s buried under photo albums, Reader’s Digests, and Cosmo magazines.

The first floor is gradually improving since we’ve stocked up on cleaning supplies.  We can’t take all the credit for that though.  A cleaning woman came by and she broke her back getting the floor and counters cleaned.  We’ll just have to maintain and improve on that.

After the initial rush of effort we burned out.  I even got sick.  Hell, the handyman that put in the door for us and did a few other odd jobs got sick too.  I blame it on a combination of the heat and bacteria laden dust that was all over the place.  I’ve never burned through a bottle of Lysol so fast in my life as I have here.

I’m recovering now.  We’ve been putting in a lot more ‘do-nothing’ time this week.  We spent some time in Manila too, soaking up the sights and the air conditioning.  It feels good to just relax for a while after putting in so much effort cleaning and organizing a house.

After arranging all of the books in the ‘library’, I’m thinking my next project will be painting.  I’m going to start off with a fresh coat of white just to get everything looking clean and attractive.  Then, for our bedroom, we’re going to get creative.  These are our walls, so why not?  Maybe a house there, a tree over there… a field with a river.  I may even get a guy to come in and do some anime graffiti on two walls if he doesn’t charge too much.

Anyway, I’ll be heading back to Singapore for about a week starting on Sunday.  I have some more stuff there that I have to collect up and have shipped over.  It should be fun to just hang out there for a while.  Living in Singapore made the place feel like an onerous burden, but when you’re just going somewhere temporarily, you savor the experience more.  I’m looking forward to having more chicken rice and jogging at Bedok Reservoir and Pasir Ris Park.

Oh, and here are some photos of cats, to liven this post up a bit: 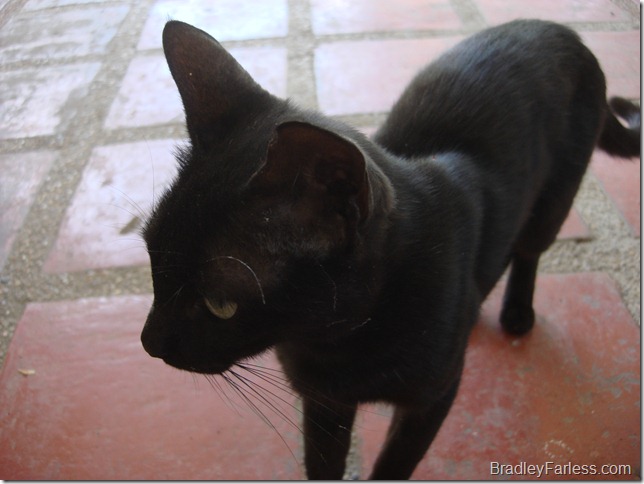 This is Gibor, a cat that lives at my wife’s house in Antipolo.  He’s the male version of Thumper and you could almost confuse the two, except Gibor doesn’t walk funny and he has a huge pair of balls that we need to get whacked off. 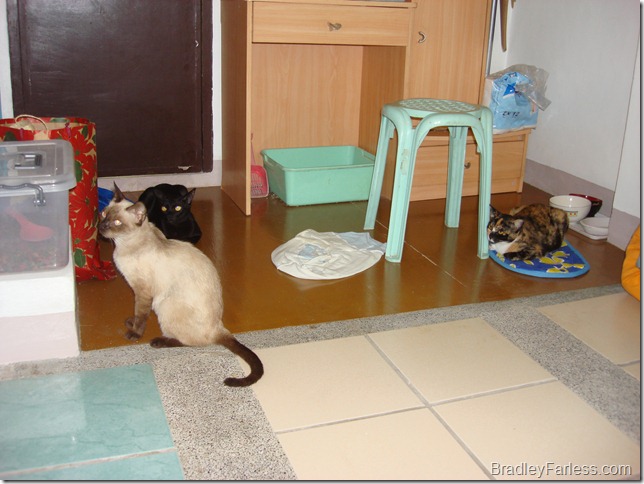 The Siamese in this photo is named Pepper. She snuck into our bedroom to see if she could beg for an extra serving of cat food.  Notice the bootleg litter box under the desk.  Thankfully we got that replaced with a real litter box and now that we have a real door installed it’s in the bathroom. 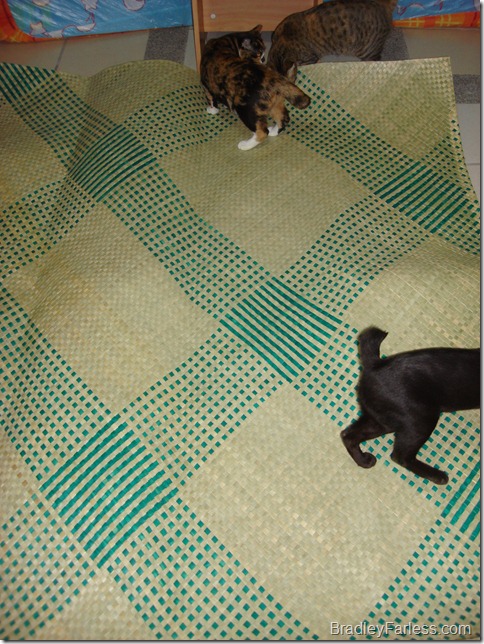 p align=”center”>Dapper, Thumper and Marble are investigating a rush mat I bought.  It’s a local woven mat called a ‘banig’ that you roll out on the floor to sit or lay on when you want to relax, but haven’t showered yet.

Ya? Pepper hasn't been around much lately. She goes off to get laid and then has kittens somewhere. Plus, I think another cat in the house named Pretty is scaring her off. They fight over food all the time because they weren't being fed enough.

I have 3 cats of my own that we brought with us from Singapore. They'll be accompanying us to the US as well. They're good girls, each with their own weird personalities.

Well, we're doing the best we can as fast as we can given the circumstances. As for trees and a river, we're talking about painting more than the real thing.

You got quite a lot done. Glad to hear it's going much better now. Be careful with the…heat….your health..food…thieves…etc. Just some Motherly advice haha! Love you guys. Oh yes, some trees & a river would be nice for my room thank you, hehe!