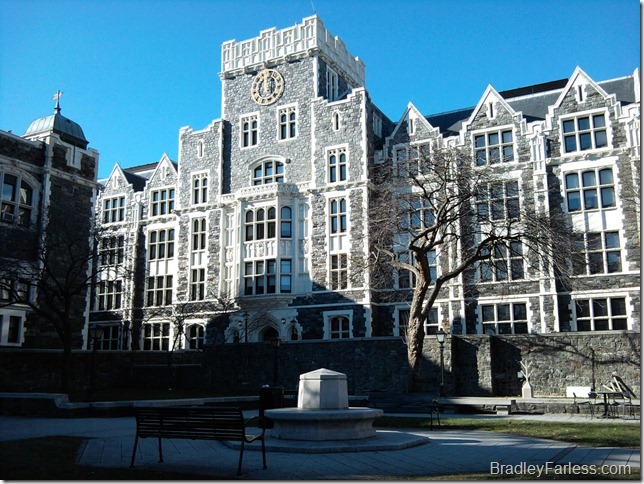 My educational record is a little crazy, I suppose.  I took classes part time from both Park University and UMUC while I was in the Army.  Between those classes, the CLEP tests I took, and the college credit value of my military training, I have about 50 or 51 credit hours.  I also have a 3.7 GPA.

I recently heard about the Post 9/11 GI Bill, which is a VA benefit that will allow me to go to school full time, have the tuition and books paid for, and even receive a living allowance (BAH (ignore the warning, the site is legit) at the rate of E-5 with dependents).  I realized that’s a pretty good deal, getting paid to go to school, and I wanted to jump on it as soon as possible.  It’s time to finish my degree!

So, what to do?  Well, I applied for CUNY to start with.  I figure I’ll start out with them and then perhaps at some point in the future I’ll move to another school.  I don’t know.  I suppose it depends on how I like the place.  CUNY is the City University of New York, and is a university that encompasses a large number of colleges scattered around the greater New York City area.

CUNY is also a public college.  It’s not a private school.  I didn’t think I’d have any bumps in the road getting admitted.  So far, though, it’s been nothing but a pain in the ass.  First off, I applied for admission past the deadline.  I wasn’t even back in the US when the deadline passed, actually.  So, my initial application for Hunter College was rejected.  Hunter was already filled and closed to new registrations.  So, I chose CCNY, City College of New York, from the list of schools in the CUNY system that still had openings.  I went to the school and did a direct admission.

This is where things got complicated.  I understood that the other school was full, but when I yet again received a rejection letter from CCNY, stating this time that it was based on my “academic record”, I was more than a little agitated.  Besides the fact that I was running out of time for enrolling, my academic record was more than good enough.  I thought about it, but I just couldn’t figure out what the problem could be.  The only thing I could guess at was that it had something to do with my CLEP tests.  That couldn’t be right though, because CCNY accepted up to 90 credit hours for transfer students.

I decided to go up to the school to figure out what the problem was.  When I got there, I described the issue to the girl at the counter and she went and brought out the person that had sent me the rejection email to better explain what the problem was.  Turns out, it has nothing to do with my academics, per se, so much as the lack of evidence for my math ability.

Eleven years ago, I knew for sure that I was going to join the military and I knew for sure that I was just going to go ahead and do twenty years and retire from it.  I knew I should take the SAT and ACT, so I did, but I didn’t put any effort into them, so the results were crap.  I didn’t really care back then.  Now, something I did eleven years ago has come back around to bite me in the ass.

Since I haven’t taken any college level math courses, my SAT and ACT scores were crap, and I went to high school out of state, meaning they can’t check the regional math score, I was up shit creek in regards to admission as a matriculated CCNY student, 3.7 GPA or not.

The next thing was to discuss options.  There are almost always options and ways to work around things like this, and this situation was no exception.  The VA counselor knew just what to do, and less than 40 minutes later he had me out the door, still on track to start school at the end of January.

This was really the best solution, because it keeps me from wasting time doing a dead end job between now and Fall, it gets me started on my education, and it’ll still allow me to collect on my VA benefit payout.

Hopefully this is the last bump in the road.  I’ll be receiving an email in about two weeks, hopefully, letting me know what to do next in regards to starting classes at the end of the month.  I wish it were sooner, so I could register for classes, get text books and get a head start on studying.

Ya. I've always had issues with math too, which is why I was avoiding taking a math class while I was working full time. I don't think I'd have been able to figure it out and I'd have ruined my GPA. Now I have more time to just sit and study. What did you major in anyway? DM me on Twitter if you don't want to broadcast it.

Good to hear things worked out, if not entirely the way you had originally planned. =) Good luck with the online math course too. Math was my worst subject bar none. =