When my wife and I moved to the Philippines we were fully expecting to not have Internet, except for at Internet cafes, until we moved to Manila.  My in-law’s house is way up in a mountain valley.  There aren’t even phone lines here.  So, we were thrilled to find out that we did in fact have options for Internet service, though the only carrier with coverage in our area is Globe Telecom.  Globe offers two types of service here, Globe Tattoo USB broadband and Globe WiMax.

We’ve used both.  We’ve also spent quite a bit of time talking to Globe Customer Service reps about quality issues, and while I’m still happy we have Internet service out here in the boonies, I figured I’d write this blog post to let people know what they can expect and what they might be getting themselves into when they sign up with Globe. 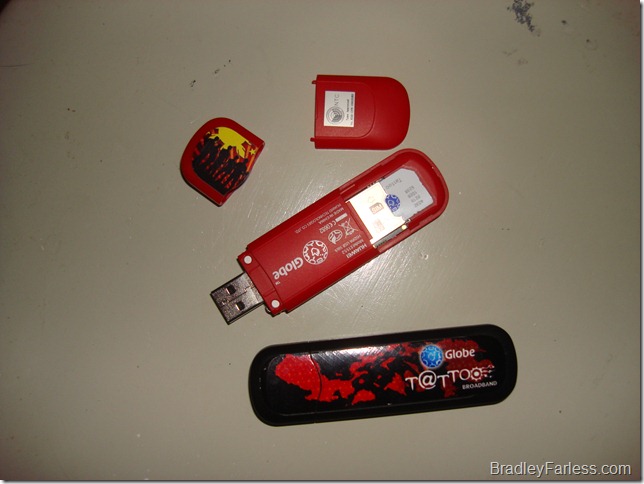 When we first arrived, this was the option that was recommended to us.  We weren’t even aware of the WiMax option until much later and we were both using one of these USB sticks for our Internet access.  These things are convenient and portable.  You can take them with you and plug them into your laptop for access anywhere Globe has coverage.  They work ‘out of the box’ with both Windows and Mac OSX and with a little extra work you can even get them working on Ubuntu Linux, though with less features.  When you first plug the stick in, you’ll be prompted to install a software package that will allow you to connect to the network, monitor your usage and even send and receive SMS from your laptop (at standard rates).

The Internet service rate is really affordable, at 5 PHP (0.11 USD) for 15 minutes.  That’s great if you only want to use the Internet for an hour or so a day.  You could wind up saving by using it, rather than having a subscription plan.  You can also get deals like 24 hours of service for 50 PHP (1.10 USD) or 5 days of service for 220 PHP (4.85 USD), which is a discount on the regular rate.

The problem with the Globe Tattoo USD Internet service is the network itself.  From what I read there are very few areas where it works well, and more often than not you won’t be reaching the 2 MB/s advertised speed.  There are times when the service doesn’t work at all.  It will let you connect, and debit 5 PHP from your account, but it won’t actually connect to the Internet.  There was one instance where I signed up for the 24 hour access service, but was only able to effectively use the Internet for an hour and a half.  The fallback to that is that you can call Globe’s help line and if you complain enough, get the amount refunded to your account.  It’s a lot of hassle though. 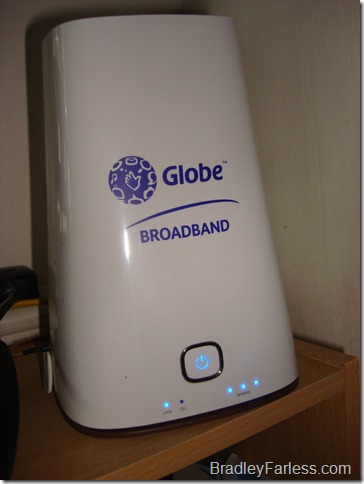 Globe WiMax is broadband Internet access, but without wires.  It works pretty much the same way any broadband Internet service does.  The set-up is just a bit different.  It typically comes in two parts, a white modem that looks like a lamp shade or blender and an external antenna that’s mounted to the outside of your house.  You can get the modem to work with a wireless router so more than one laptop can share the connection.  When my wife and I found out about the WiMax service we immediately switched to it.  Both of us like to surf the Internet, so it made sense for us to just use WiMax.  More often than not we were both signing up for 24 hour access on the Tattoo USB sticks, so we were paying more than what the WiMax costs.

Where Globe WiMax fails is in the network, again.  Since it doesn’t use wires and relies on a broadcasted signal, any time the weather gets a little rough, your signal quality will suffer.  Sometimes storms will knock the service out entirely for more than a day.  Other times it just goes down for no discernible reason.  Right now we’re having a problem with the service speed and I’ve been working on getting that fixed for about 5 days.  The problem is with the servicing tower in our area.  My speed started capping at 300 kb/s this past Sunday and I can’t get better than that since, even though I was reaching 1 MB/s or more regularly before that.

When we first decided we wanted to get WiMax we went to the Globe office at SM Taytay, or maybe it’s in the mall that’s connected by a closed bridge.  We were told that the company would check to see if service was available in our area and they would call us back.  They never called back, even though we waited for about two weeks.  We wound up running into a contracted employee of Globe, a licensed distributor, that hooked us up.

We arranged to have our service installed two days after our application was approved.  The day before our installation date we went to Manila.  While we were in Manila thinking about what to have for a late lunch, Globe installers called us and asked us why we weren’t home.  We had to argue with them about what an appointment means and wound up leaving Manila (and not eating til much later) to make sure we got our service and they didn’t just leave and not ever come back.

Our service was installed at about 4 PM. That night the service went down at 11 PM.  I called the next morning to complain at about 6 AM and, luckily, repairmen were going to be in the area that day so they stopped by.  Right when they came in the door the service came back up.  The problem was with the tower and another crew had repaired it.

The next day another group of Globe employees showed up to install our service.

Two days later another group of Globe employees showed up to repair our service.

A few days after that I got tired of the bad signal quality and unreliable nature of the connection and called to have it checked out.  When the repairmen showed up, they said the antenna should be mounted on the roof so it can get better signal, not on the side of the house under the eaves where the original installers put it.

I discovered that if you don’t have a certain amount of prepaid credits on your phone, you can’t call Globe’s free help hotline.

Last Sunday my service suddenly dropped down to 300 kb/s max download speed, instead of the usual 1 MB/s.  Because my phone was low and I was too lazy to go get it topped up, I tried out contacting Globe via their Twitter account.  After dragging the conversation on for a few days, the Globe employee finally told me: “Btw the 300 kbps result of the speed test that you have submitted is an acceptable speed for wimax, … We hope you understand. Thanks.”  My problem with this is that I have the 1 MB/s plan, not the 512 kb/s plan. If I had the 512 kb/s plan I wouldn’t care, because that IS fairly acceptable.  However, my minimum speed should at least be higher than the speed of the lower tier, or what the hell am I paying more for?  And common sense should tell you that the speed wouldn’t just suddenly drop off and cap at 300 kb/s like that for no reason.  There had to be a problem.  So, I contacted Globe via the 211 help hotline and gave the rep some information from the modem admin panel.  He said that one of the figures wasn’t within acceptable limits and sent technicians, which in turn said the problem is with the tower, which is what I told the Globe guy on Twitter to start with.  I’m still waiting for them to fix whatever the problem is.

Like I said initially, I’m glad we have service at all way out here, but if a company is going to offer service, could they at least do it correctly?  Can they meet their own service standard by doing installations properly and properly diagnose problems and then fix them?  Can they not send multiple crews to do the same job? Can they train the person running their Twitter account properly?  And why do I have to have more than 1 PHP in prepaid load to call their free hotline?  It’s free!

yeah!same w/my problem now.2 weeks no internet connection in my home and still can”t find some one to come and fix it.I kept on dailling that service center # 211 but cannot be reach..
I”m about to cancelled my contract w/this network.Grrrrrr!!!!