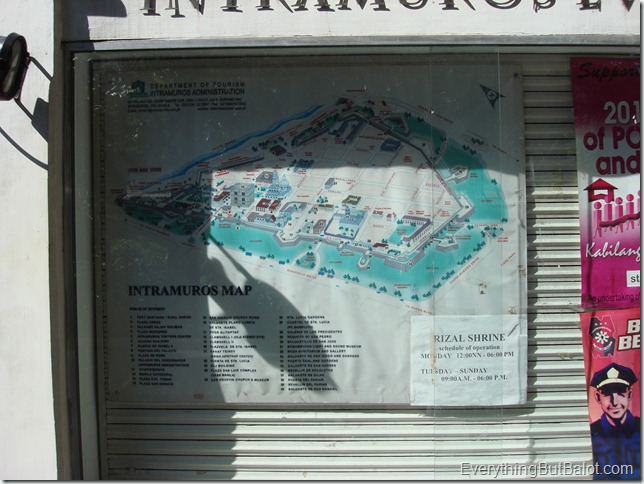 The Intramuros area of Manila is actually pretty big.  There are still sections of the original wall wall running through the city, complete with rusty cannons and stone guardhouses, which people can still walk on.  These areas aren’t maintained well, though they’re kept relatively clean.  The inner area of the wall seems to have been converted into mostly tertiary schools, souvenir shops, restaurants and a few businesses.  We didn’t wander the walls or the greater Intramuros area during this trip; we went straight to Fort Santiago. 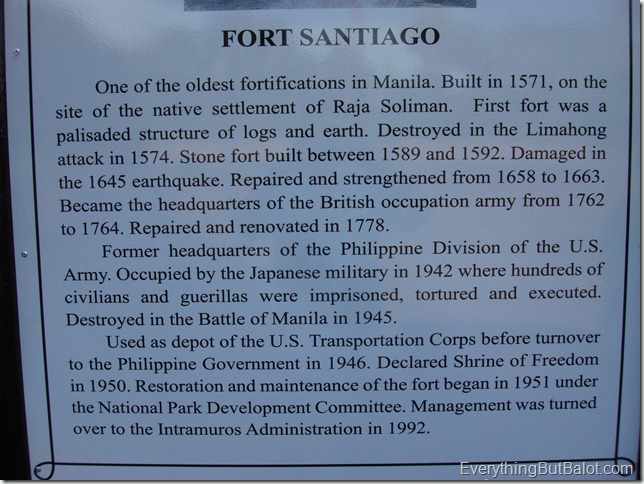 Fort Santiago is the site of the oldest military compound in the Philippines and has been attacked, destroyed, rebuilt and used by the Spaniards, Filipinos, British, Americans and the Japanese during various wars and occupations.  It’s purpose has been both noble and terrible as a site for national defense and the scene of a major massacre.  Currently, the area is in varying states of repair, with some areas looking well manicured and others crumbling with every gust of wind.  You can see where some structures have been shored up with improved technology over the centuries, like a few steel braces and beams we saw on the original red brick Spanish military barracks which was originally built in 1593. 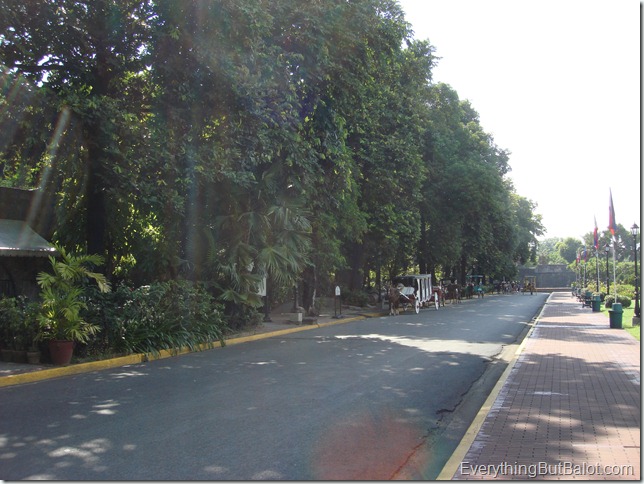 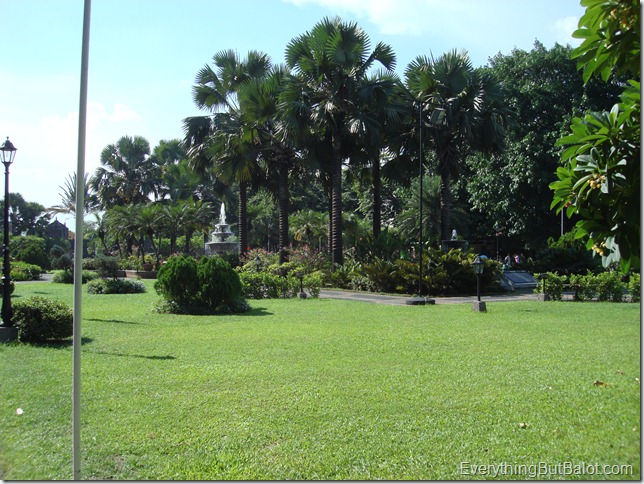 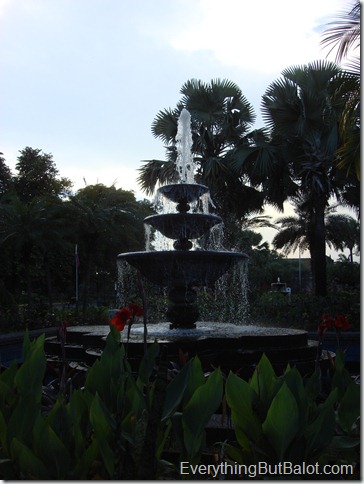 Before entering Fort Santiago proper, there is a well manicured area that must have been rebuilt to give you a sense of what the area looked like in its prime, under Spanish control.  It’s really quite nice.  There are also a few cafes and gift shops in this area, as well as a partially restored warehouse that was used for storing goods brought in off ships. 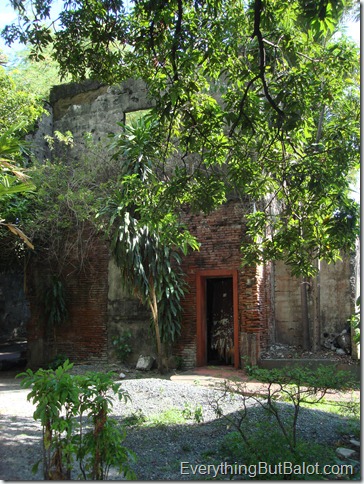 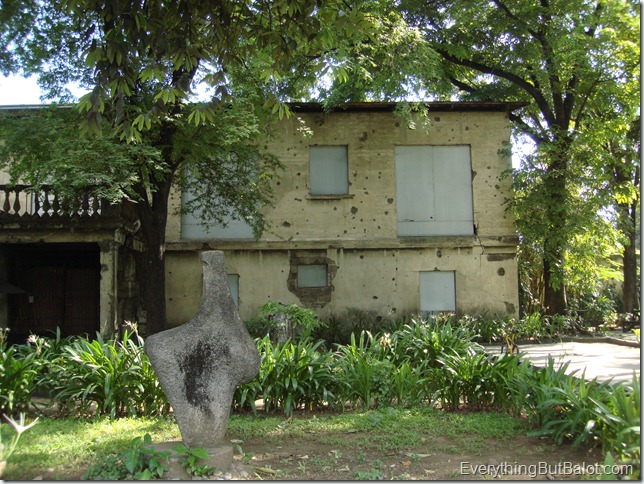 There are still a few ugly ducklings around that need some attention and restoration, but I saw plenty of construction material positioned alongside and in front of them, so at some point these should be fixed up nicely.  I’m especially curious as to what the second building was for.  It looks like a residence.  A rough guess is that it belonged to the owner of the shipping warehouse across the plaza.  Some of the chips on the walls look like they were caused by bullets though, so perhaps at some point a group of soldiers tried to use it for a makeshift defense. 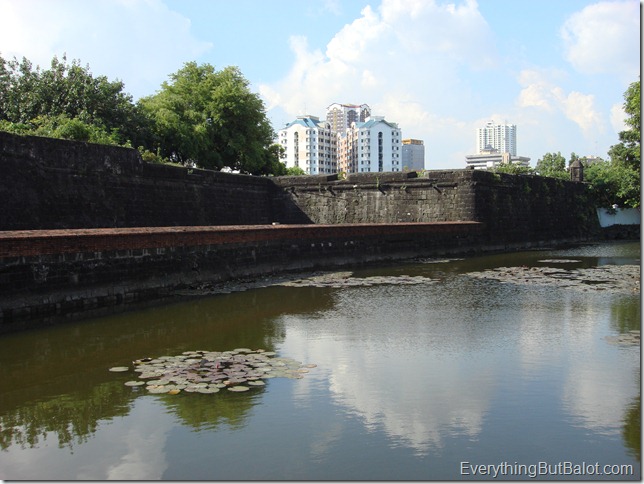 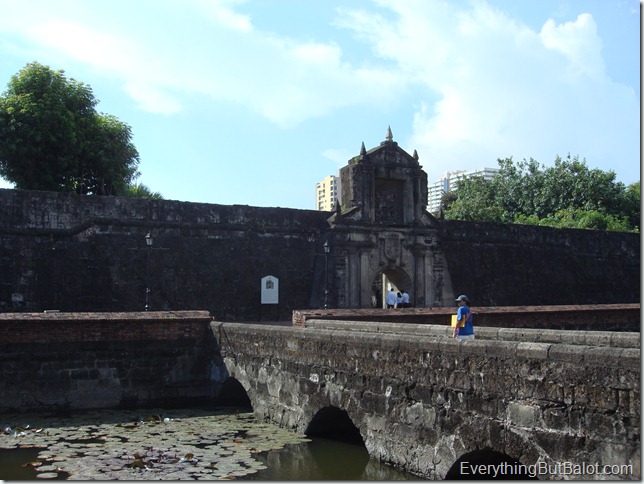 To enter Fort Santiago proper, you have to cross a moat using the original bridge. 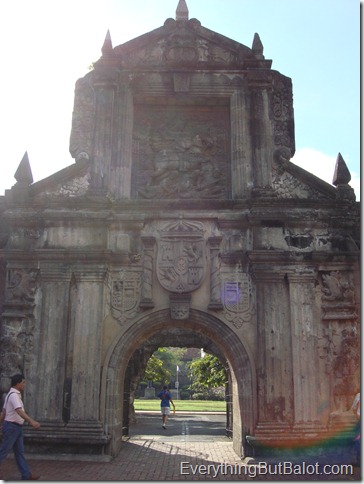 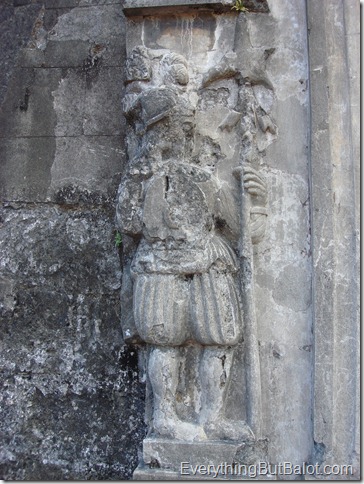 Flanking both sides of the gate are relief carvings of what look like Spanish soldiers.  They’ve both been heavily damaged, perhaps through intentional defacing by angry Filipinos who resented Spanish rule. 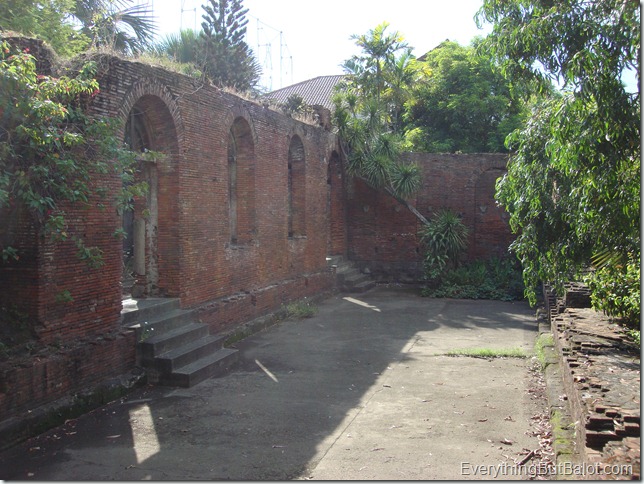 These red brick ruins are all that’s left of the barracks built by the original Spanish soldiers in 1593.  During the American period they were used by military officers and their families.  The building was destroyed during World War II. 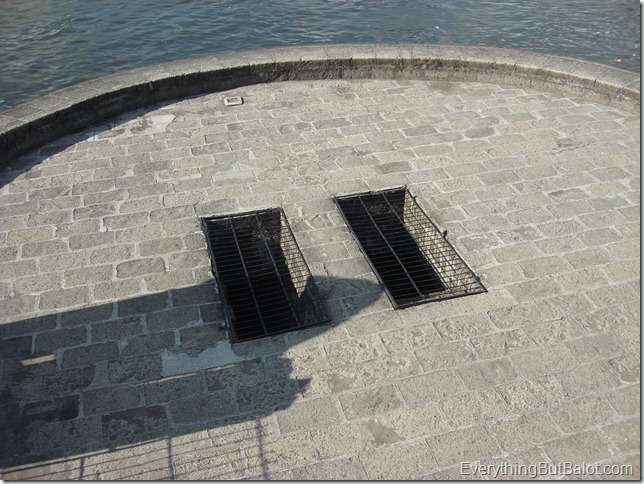 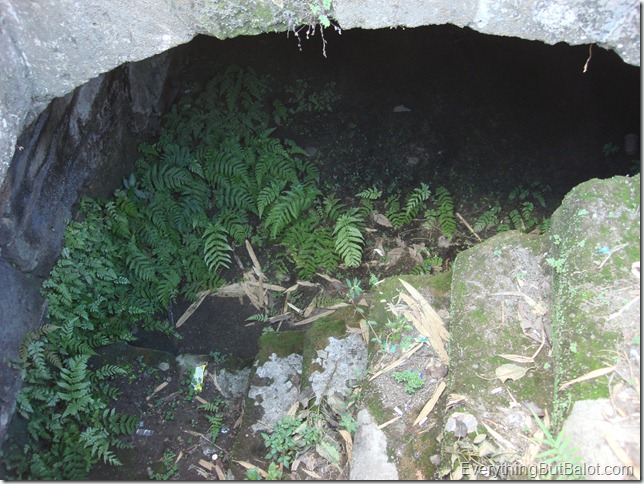 The two holes in the first image, and a few others like it, were placed along the waterfront area of the fort, by the Pasig River.  When we first saw them my wife said they looked like places for holding prisoners.  I looked down in one and saw that it had a tunnel that led back into the fort so I guessed that it was a powder and munitions storage area.  Turns out we were both right. 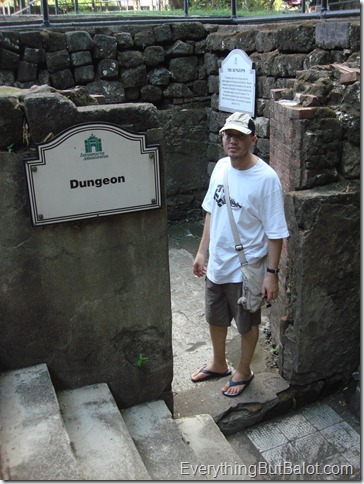 The Spaniards originally used the area as storage vaults for munitions and powder, but it was too damp to suit their needs.  They built a new storage area further away from the river and turned it into a dungeon for prisoners.  This area would later be used by the Japanese to imprison and torture Filipino and American guerrillas, civilians and POWs.

Just past that sign I’m standing in front of in that picture there’s an opening that leads down into the lower level.  It was locked up.  I’m guessing it was damaged during the Ondoy disaster last year and hasn’t been reopened to the public yet, which is a shame because it would have been very cool to get a first-hand look at something with so much historical significance.  I’ll have to find out who to annoy into reopening the area.

Since I couldn’t go in, I stuck my arm down through the opening and took a few pictures with my camera.  When I got home later and transferred the images to my laptop, this is what I saw: 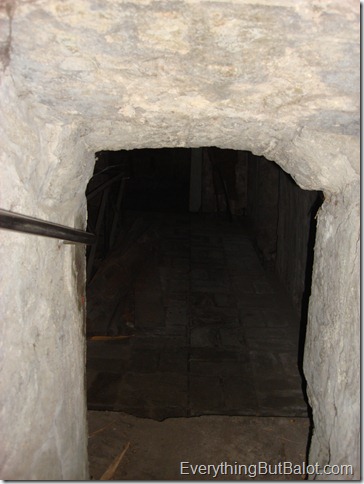 Notice anything odd about that image?  Here are two more that I took from different angles: 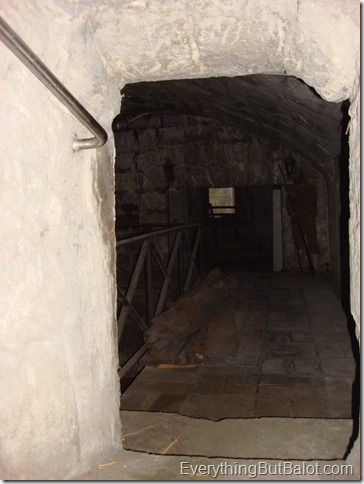 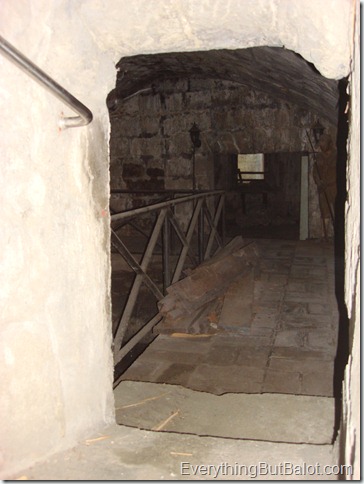 That’s just a tad bit creepy right?  I think it must be a statue, because later I saw bronze statues through an opening in another closed off area, but those were all one solid color.  This one has different colored clothing on and a more natural looking skin tone.  The area is creepy anyway, because the Japanese massacred 600 people in there at the end of the war: 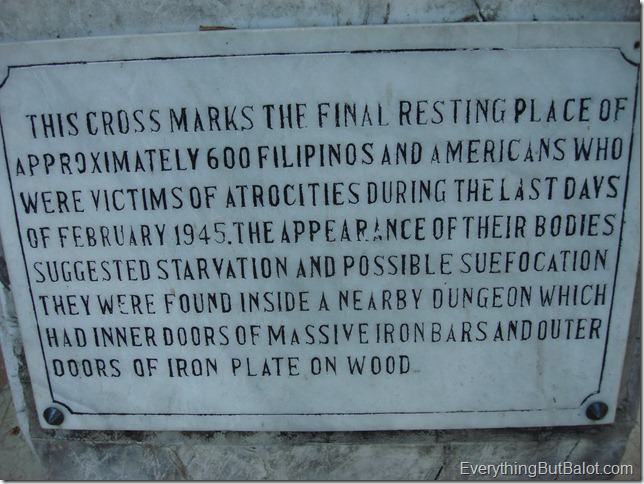 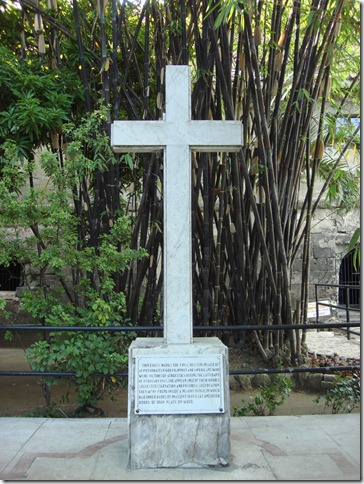 The whole Fort has a pretty heavy atmosphere.  A lot of lives were lost in that small area and during the majority of its existence it has been used as a stronghold for a foreign military on Filipino soil.  As we walked through I couldn’t help but imagine the way things must have been in the past, what the soldiers must have done, both good and bad, or how the Filipinos felt when they saw the walls.  I spent some time in the US military so I wasn’t imagining ‘glorious battle’.  I was just wondering at the daily routines.  What did they eat?  Where did they eat?  I wondered how they’d adjusted to the heat and if they ever flicked cigarette butts over the wall into the river.  I wondered where they used the toilet.  The simple stuff that often gets overlooked in action movies.

Fort Santiago is well worth a visit and I’m looking forward to going again when more areas are open to the public.  Besides the dungeons, the actual building Jose Rizal (the Philippines national hero) was imprisoned in as well as a walkway down by the river were blocked to the public.  I still think it must be due to last year’s Ondoy storm damage so I’ll keep my fingers crossed for a reopening sometime in the next few years.

Note: In this post I deliberately avoided talking about Jose Rizal, though his presence in the fort does play a large part in the nation’s history.  The reasons for that are that I don’t know enough about him to discuss him yet and I focused on the areas that interested me or had significance to me as an American.  The fort has a very nice Jose Rizal museum which you can take a look at if you have an interest in that aspect of Filipino history.  I’ll be posting about Jose Rizal in the future when I’ve heard about and read up on him more.