So, in the last post I was talking about finally making some progress and that progress was seeing the first load of refuse being hauled away.  Both my mother-in-law and father-in-law have been collecting things, mostly junk for lack of a better word, for quite a few decades.  I’m talking rusty, broken knives, bits of wiring, broken figurines, worn out brooms, and other things that no longer work that they didn’t want to get rid of because some day they might figure out a use for it again.  The result is that the house was so packed with crap that there wasn’t even enough room to actually live in it.

My wife and I are making our best effort to solve that problem.  I wound up getting a lot of exercise, a lot irritated and I also got in a lot of yelling before the garbage went on its merry way.

Anyhow, with that stuff gone I can start putting things that are worth keeping in the attic, or clean them up and leave them on display, rearrange the furniture, get the electrical wiring installed correctly, fix the plumbing and the roof and then do some repainting.  The place is in a state of disrepair that’s ridiculous, and I can’t see letting them continue on living this way, even though we’ll only be living here temporarily.  In a few months we’ll be moving again to Manila proper for work and school and we’ll be renting an apartment.  I want to improve their standard of living before that happens and then maintain it by visiting weekly.

Besides the accumulated junk, the problems I see in this house really blow my mind because they’re things that I took for granted in the US (and to some extent in Singapore) without even realizing it.  Among other things, there’s a water shortage.  We have to get up at 5 AM to fill drums of water to use throughout the day because by 6 AM the taps run dry.  It’s an interesting experience, and I suppose it’s not very depressing for me because it’s just temporary, but I can’t imagine facing the realization that life would be that way every day, forever. 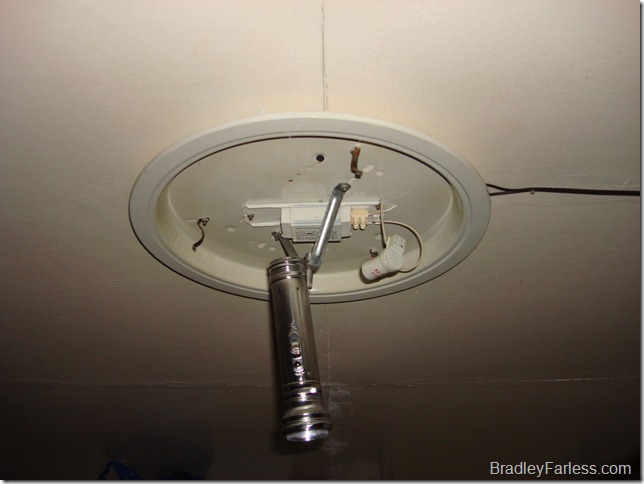 As for our own sleeping arrangements, we walked into a bare bedroom.  It didn’t even have a bulb in the light fixture and for the first 7 days we couldn’t find one to fit it.  We were using a lamp but our cats knocked it over and broke the bulb so we spent the last few nights with an LED flashlight hanging from the fixture.  We finally found a hardware store with the bulb today while shopping for concrete and when we plugged it in, I was excited, because it was like crawling back out of the stone age into modernity again. 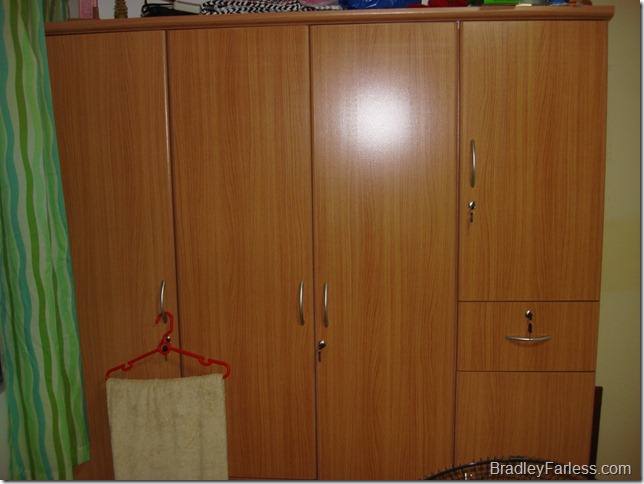 We also had to get a dresser for all of our things.  We found one we liked and had it delivered.  I was afraid of the amount of time I’d have to put into assembling it but the delivery guy set it up himself.  He did it in about an hour… without a manual.  That’s impressive to me.  See the pictures below to get an idea of how many parts the thing has. 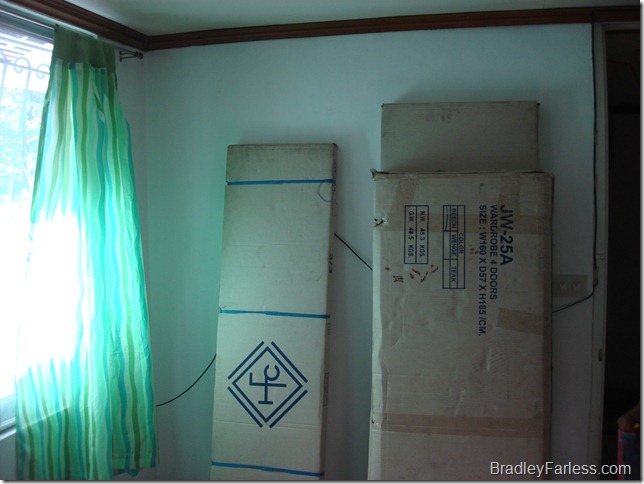 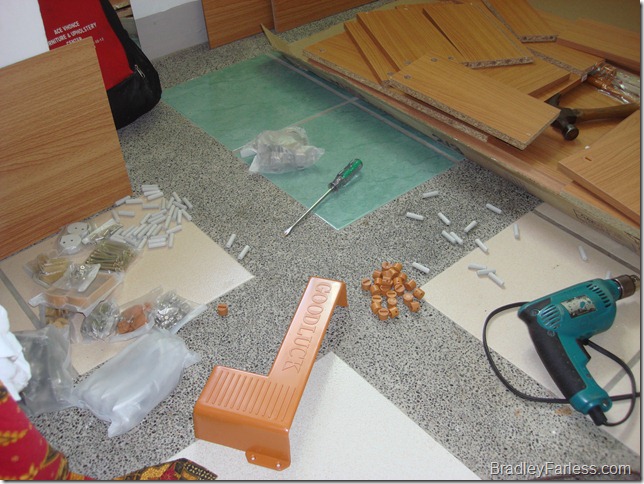 The latest thing going on for us is having a real door set up to partition my wife’s bedroom, hallway, and bathroom off from the rest of the house.  There are various reasons for this, but mostly it boils down to privacy and security.  You can see in the photos of the dresser that we got one with locks on it.  The windows also have bars on them.  In these small villages crime is rare because everyone knows each other, but that doesn’t mean it doesn’t exist and it’s more prevalent if you make your house inviting to potential robbers. 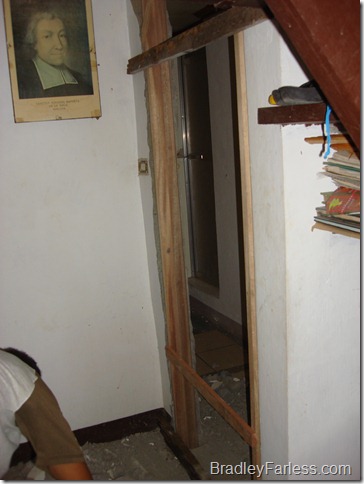 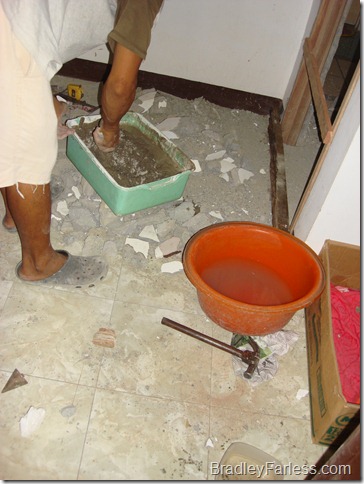 Anyway, the guy is about halfway done with the door installation.  He was redoing the concrete around the door frame right before he quit for the night.  This should finally get done tomorrow and then we’ll stop renovations until June, when we want to redo the electrical and repaint.

Other than that we’ve been trying to get familiar with the layout of the town again.  We’ve been spending time finding cleaning supplies, buying some pots and pans and other necessary items for daily living.  We’ve also been meeting up with family and eating out in Antipolo to try to relax a bit.  Like enjoying this big halo-halo at Chow King for instance: 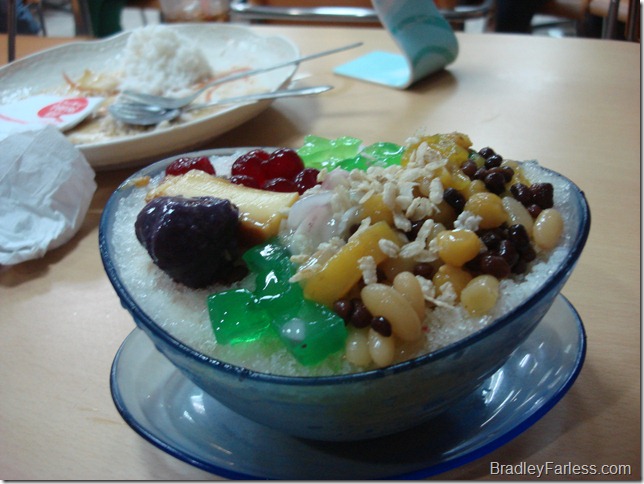 I have a feeling that the next few weeks are going to be filled with quite a bit of work, but in the end I’m sure it’ll all be worth it when the house is clean, orderly, and comfortable for living in again.

the light fixture is quite clever of you. Btw, what's the voltage in Philippines?

Yes. You're absolutely right. It reminds me of a saying in the Army: “Don't get complacent.” It's almost a mantra. There's been a guy in the house working every day since we've been here on various projects. Luckily his fee is only 250 PHP a day, which is roughly 5 USD. We have to provide materials of course.

the light fixture is quite clever of you. Btw, what's the voltage in Philippines?

Good luck.
Seems like you have a lot of work but are at least being proactive.
Good to leave the in-laws with a better place when you re-locate.
Sometimes, people need to have a little fire put under them and to realize what they were missing.

Yes. You're absolutely right. It reminds me of a saying in the Army: “Don't get complacent.” It's almost a mantra. There's been a guy in the house working every day since we've been here on various projects. Luckily his fee is only 250 PHP a day, which is roughly 5 USD. We have to provide materials of course.

Good luck.
Seems like you have a lot of work but are at least being proactive.
Good to leave the in-laws with a better place when you re-locate.
Sometimes, people need to have a little fire put under them and to realize what they were missing.