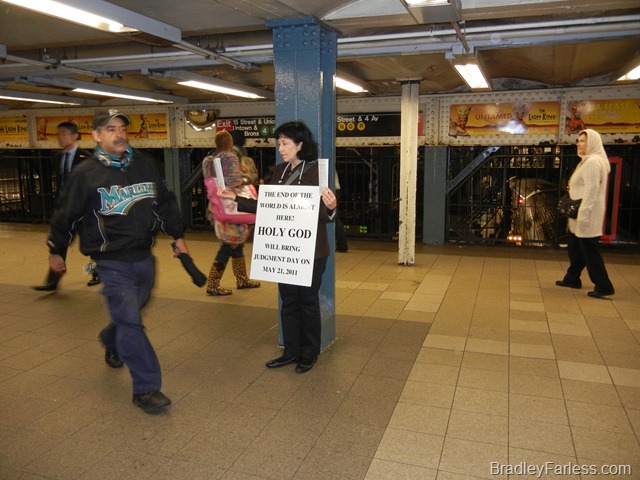 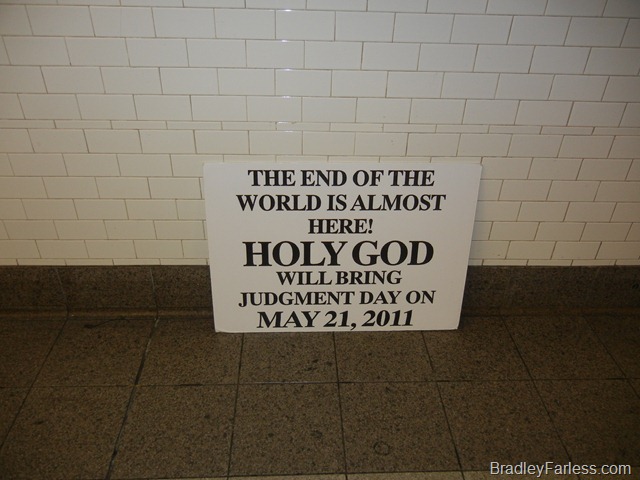 They're really playing it up in the news here too. I suppose we'll have plenty of warning here on the East Coast of the US, since it'll be 6 PM on your side of the pond first. =)

brace yourselves, it is 21/05 in australia. this may be the last comment i ever make.

I took one of their tracts and started reading through it, and it requires some stretches of the imagination to interpret it the way they do. They even rely on an exact word count for some of their predictions, which seems insane to me considering the Bible wasn't written all at one time, in one spot.

Apparently, she is not alone.
Many have left their jobs in preparation for 5/21.

Ya, but typically when religious nuts get even more nuts, they just drink poisoned Kool Aid and try to catch a rocket ship to heaven.

just be careful on that day coz if they know its not the end of the world, they might want to prove they are right and take matters into their own hands. lolz.

kahel kuting: That's a very good point. If the end of the world were coming, and I knew it, I could find plenty of better things to do with my time than stand in the subway being mocked as a lunatic.

We started talking about this in my World Humanities class yesterday, and another person in the class had one of the fliers that someone had put in her hand on the way to school. Well, I guess we'll see what happens in 14 more days. Or less. I guess it depends on what time zone you're in.

if she knows that the world will end 13 days from now or probably 14 days from when you took that photo, she does act like she has a lot of time on her hands. i mean, if i knew the world was gonna end i wont be spending it in the subway with a ridiculously hideous life vest trying to let my negativity rub off on other people. id be in the bahamas or disneyland, boracay or palawan etc etc. i mean come on, we should treat each day like its the end of the world. that way we… Read more »

reesan: God's omniscient, remember? You just reminded me of the final paper I have to write for World Humanities. It's about free will vs predestination, across 4 works we read during the semester. It's going to be long, and a good bit of work, but I'm looking forward to exploring the idea and writing about it.

I appreciate how God had the foresight to use the Gregorian calendar, which wasn't invented until the 1500s, to inform us when he intends to end the world. He's good like that. 🙂

Very good point. I bet next year is going to be REALLY interesting. I'll have my camera ready!

Consider it a prequel to the 2012 madness we will get next year.